IMAGINE early morning you went in the kitchen to boil the milk and u saw that your LPG has exhausted! And when you call for new, you come to know that LPG has been not only exhausted from your cylinder but the whole world!  Yeah it can be your nightmare but a day will come […]

IMAGINE early morning you went in the kitchen to boil the milk and u saw that your LPG has exhausted! And when you call for new, you come to know that LPG has been not only exhausted from your cylinder but the whole world!  Yeah it can be your nightmare but a day will come when this night mare become truth. Now think the waste you create every day, every week, every month, and every year from you home which is completely burned or dumped on dumping grounds without its’ use still creating climatic fuss! But every problem has a solution. 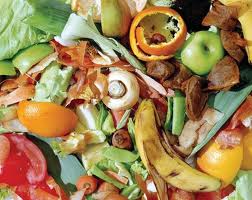 There increasing need of fuel everyday usage of domestic to international vehicles from cars, buses to trains etc. pressurizes specific fuels like petrol, diesel, etc. These fuels badly affect the atmosphere after their usage which can be blamed for increase in various hazardous gases in the atmosphere for instance carbon dioxide. We cannot preserve such non renewable resources efficiently but we can found out solution for such arising problem of fuels, there is need of a fuel which will be utilized efficiently and won’t give hazardous results after usage.

Biogas typically refers to a mixture of gases produced by the breakdown of organic matter in the absence of oxygen. Biogas can be produced from regionally available raw materials such as recycled waste. It is a renewable energy source and and in some cases very negligible amount of carbon is released. 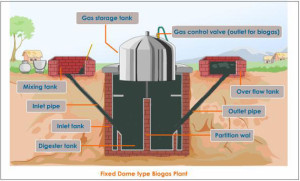 The composition of biogas varies depending upon the origin of anaerobic digestion process. Land fill gas typically has methane concentrations around 50%. Advanced waste treatment technologies can produce biogas with 55%–75% methane, which for reactors with free liquids can be increased to 80%-90% methane using in-situ gas purification techniques. As produced, biogas contains water vapor. The fractional volume of water vapor is a function of biogas temperature; correction of measured gas volume for water vapor content and thermal expansion is easily done via simple mathematics, , which yields the standardized volume of dry biogas.

By composting the manure we can obtain a large amount of gas can be converted into biogas. Converting cattle manure into methane biogas instead of letting it decompose, global warming gases could be reduced by 99 million metric tons or 4%.

Biogas can be used for electricity production on sewage works, in a CHP(combined heat and power) gas, where the waste heat from the engine is conveniently used for heating the digester; cooking; space heating; water heating and process heating. If compressed, it can replace compressed natural gas for use in vehicles, where it can fuel a internal combustion engine and is a much more effective dis placer of carbon dioxide than the normal use in on-site CHP plants.

Initially, biogas was driven by driven by the need for environmentally friendly, sustainable and economically viable fuel which is interchangeable with natural gas. Many of the market’s initial installations provided fuels for natural gas vehicles. The market is now shifting to include some systems that inject upgraded biogas or bio methane into existing natural gas pipeline networks. The demand for renewable fuels has been increasing rapidly, in part due to reduce the greenhouse effect of climate change. Biogas, which consists mainly of methane, can be produced when food waste from households, manure, or crops from agriculture is broken down by micro-organisms in digesters and waste water treatment plants. Biogas can be used for heating, power generation or upgrading to natural gas quality. To upgrade biogas to natural gas or vehicle fuel quality, carbon dioxide, hydrogen sulphide, and other contaminants need to be separated. Unlike gasoline, diesel, natural gas and many other fuels, upgraded biogas (bio methane) is a renewable energy source.

We can say biogas has proven to be most beneficial then other renewable resources, it  replaces the unsustainable use of biomass, slows deforestation and reduces greenhouse gas emissions; emissions of methane (a strong greenhouse gas) associated with the decomposition of livestock manure are mitigated; the import of both kerosene and foodstuffs are reduced, thereby improving the trade balance; and healthcare costs are decreased through improved indoor air conditions and better environmental sanitation. The variety of economic and ecological benefits it affords, it has been a boon to farmers as a further source of income. Not only has been an efficient resource but also an eco friendly fuel. It’s a fuel which is transformed from fermented bio degradable wastes to a fuel which can be provided home to home through pipelines and ignite the stoves! So much of the non renewable “Liquefied Petroleum Gas” can be preserved. 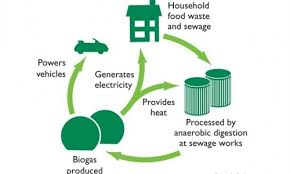 There are many pros and cons to biogas plantation, People had not been aware about the way of efficiently recycling the wastes rather investing on the non renewable source of energies. There is need to use it more in cities as already many of the rural areas but there is much need in cities as population is much dense in cities and usage is enormous then rural areas, support and assistance of government is highly required. In coming decade we can say that it can be source remaining our hands to reduce-recycle-reuse!