Their bodies were covered in soot in three layers at least. Thin, frail people with shovels in one hand and a torch in the other, they looked nothing like the mighty humans that go deep inside the belly of the Earth and wrench out a very precious thing: black gold or, better known as coal. […]

Their bodies were covered in soot in three layers at least. Thin, frail people with shovels in one hand and a torch in the other, they looked nothing like the mighty humans that go deep inside the belly of the Earth and wrench out a very precious thing: black gold or, better known as coal. The stark contrast between the people who mine coal out of its earthly home and the people who sell it and make a lot of big bucks is blunt in the face. These miners live on the bare minimum, without amenities and certainly without insurance and benefits. If some work accident were to happen, little condolence and no compensation is provided.
Coal mining in India largely confined to the states of Jharkhand, Odisha, Chattisgarh and Bihar. Areas like Dhanbad, Kalahandi , Jharia are very rich in coal. 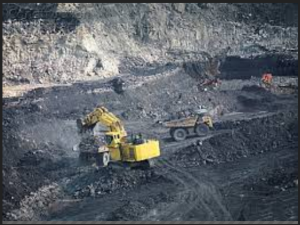 Coal mining is usually done by shaft mining and seldom by open quarrying. There are several work hazards that the miners face:
• Shaft mining requires the miners to be lowered below the earth’s surface in shafts through a vertical tunnel. The conditions below are severe and unpredictable.
• The temperatures are very high and the humidity may or may not be high.
• The air is rather low in atmospheric oxygen and there are pockets below the earth’s surface with high concentrations of carbon monoxide. This is a fatal gas that may knock the miners dead.
• Since it is a small tunnel with only one outlet, the carbon dioxide produced takes more time to diffuse out to the outside atmosphere, making breathing difficult.
• It being dark in the tunnel and the shaft being only a temporary one, mechanical injuries may be incurred with a malfunction in the shaft, slipping on the ground, etc.
• The thick soot that goes in with every inhalation deposits in the lungs of the workers and eventually brings down the total lung capacity.
The effects of coal mining on the miners is slow, penetrating and irreversible. The health issues that prop up are slow to be noticed but extremely dangerous nonetheless.
• Respiratory effects: Air pollutants that occur as a result of coal mining pose severe threats to the human respiratory tract. Suspended particles get deposited in the lungs and bronchi, thus blocking the alveoli in the lungs. ‘Black lung’ is caused due to coal dust. 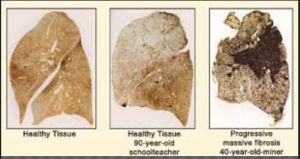 Alveoli are the seat of cellular gaseous exchange which, when blocked, hinder diffusion of oxygen into lung tissue and carbon dioxide to the outgoing air in every exhalation. Allergies like asthma, retarded lung development in children exposed to quarry dust and lung cancer are prevalent in mining regions.

• Cardiovascular Effects: Pollutants resulting from coal combustion lead to arterial occlusion (artery blockages, leading to heart attacks) and infarct formation (tissue necrosis due to anoxic conditions leading to permanent heart damage) which are common examples of cardiovascular diseases. Congestive heart failure and cardiac arrhythmias are caused as well. Soot is sometimes mixed with the blood which deposits itself on the walls of arteries, thus reducing their lumen and interrupting the normal flow and pace of blood circulating in the body. Exposure to chronic air pollution over many years increases mortality due to cardiovascular diseases.
• Nervous System Effects: Studies conducted on coal miners show direct connection between coal pollutant inhalation and loss of intellectual capacity and low IQ. Children living in Kalahandi show retarded mental growth, mostly due to Mercury poisoning that is common in coal mining zones. 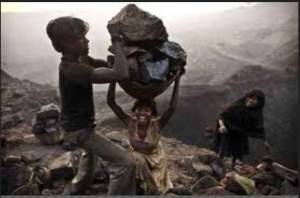 • Dermal Effects: The coal particles form layers on the body of the miners, blocking pores that function as the natural way of the body to eliminate toxic waste.
• Other effects include chronic renal failure, choking due to inhalation of sulphur dioxide, osteroporosia, ataxia, etc.
Coal mining also has negative impacts on the environment:
• Soil degradation occurs as mining areas shift constantly. As soon as the coal deposits form one quarry finishes, another quarry is dug in a nearby location. This not only disrupts the aesthetics of the landscape but it also destroys the soil and the vegetation on it.
• Soil becomes loose and prone to degradation and erosion. In regions with high wind velocity, most of the top soil is removed by wind erosion. This leaves the soil barren.
• Global warming is also caused due to large amounts of greenhouse gases being emitted from the quarries and tunnels of coal mines. Gases like nitrous oxide and carbon dioxide and released in large amounts (both are greenhouse gases) and thus increase global warming.
• Fly ash, bottom ash and flue-gas desulphurization sludge contain heavy metals like uranium, arsenic, thorium, etc. and cause serious adverse effects on human life.
• Surface run-offs are frequently causing trouble as there is no topsoil to absorb the water. Severe conditions of dry land, drought are seen due to no ground water levels.
• Due to less vegetation, rainfall patterns are uncertain and whatever water remains is not potable. Most of the water is contaminated by mercury. Mercury poisoning effects are many, including paralysis, mental retardation and death.
Coal mining is essential and important as it is the foremost source of energy in the country and globally. However, the Government needs to give more attention to the plight of the coal miners and their health conditions. There are several ignorant ways which can be rectified to reduce the environmental damage done by reckless mining. It is time the families of coal miners gets clean water, food and land as their basic rights.