You are here: Home \ Environment \ Deforestation : The effects and prevention
Environment
0

Deforestation : The effects and prevention

The oxygen that we breathe. The vegetation that we consume. Where does all this come from? Yes, the trees!! Or in general, the flora. The trees are not only helpful to us, but the birds and animals as well. They provide shelter to almost everybody and through photosynthesis, provide us with oxygen to breathe. But, […]

The oxygen that we breathe. The vegetation that we consume. Where does all this come from? Yes, the trees!! Or in general, the flora.
The trees are not only helpful to us, but the birds and animals as well. They provide shelter to almost everybody and through photosynthesis, provide us with oxygen to breathe.
But, nowadays these forests seem to have deteriorated with urbanization. People cut down trees in order to build their houses and for all construction purposes. 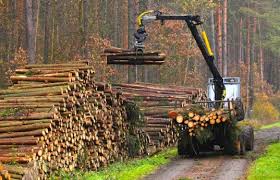 In most of the developed countries, there are hardly any trees left. Now what has to be blamed for this? Or rather, who?
It’s us.
Deforestation has become one of the greatest problems of this era.
What exactly is deforestation?
It is the felling of trees or clearing of forests so as to make the land useful for commercial or residential purposes.
The reasons for this may be many. For example, the wood is used for construction purposes and charcoal is sold as fuel. Sometimes, the land is cleared to convert it into a pasture for livestock too.
Moreover, the increasing demand for products like paper, timber has resulted in the clearing of many forests like the world’s ancient forests of Indonesia, Congo and the Amazon.There is also a rising demand for palm oil which has led to rainforest destruction. 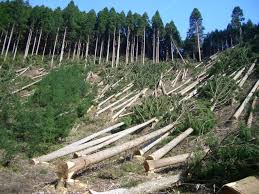 With the erratic destruction of forests, there is also the fear of extinction of species.
An estimation states that there are 1.6 billion people around the world who depend on forests in order to earn for a living.

With the clearing of forests, the top soil is loosely held and can be easily washed away by the rain.
Moreover, with the exposure to the sun , the nutrients are lost and many bacteria that are present in soil also sparse out. Thus, the soil loses its real potential.

3) Impact on the water cycle process:
With the destruction of forests, there is no transpiration occurring. Also, the water bodies dry out and there won’t be any trees to retain the water in the soil. This affects the conventional water cycle.

With drastic changes in global temperature, there have been droughts and forest fires. Now, these dying trees further release carbon dioxide to the atmosphere and thus, enhance the impact of global warming. This rising global warming could be quite hazardous and hence deforestation must be curbed.

5) Impact on the economy.
Deforestation does have an economic impact too.
The Convention on Biological Diversity said that, with the ongoing damage to the forests, the living standards of the people could be halved and the global GDP would reduce by 7% by the year 2050.
Developed countries use timber and wood for heating and cooking and this consequences in the over exploitation of wood.
With the growing population especially in developing countries, the need for houses also increases. To satisfy this need, many trees have to be cut down and many leaves have to be shed. With the conversion of villages to cities, there is a loss of a huge number of trees.

The High deforestation rate is definitely a matter to be concerned about. We need to act now and fast!
Here are some of the ways:
1) Act now!
Deforestation is all together a global crisis. It is our duty to prevent further deforestation at least by some individual efforts.Always buy certified wood or recycled products.
When the general public prefers recycled products, it per se sends a fairly clear message to the companies as well. This will enable them to uphold zero deforestation policies. 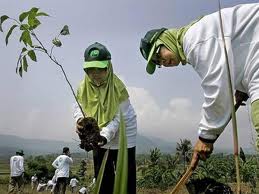 2) Involve the politics!
Science-based international forest policies are a must to curb a problem like deforestation.
The Convention on International Trade in Endangered species (CITES) encourages afforestation in order to protect the endangered animals and their natural habitats.

Companies must support zero deforestation policies. Since, they are the ones who are responsible for the majority of the deforestation happening around the world, they must take a right decision considering the drawbacks of it too .They must use recycled wood or paper in their products so that the virgin production is minimized.
With strategic marketing techniques, they can also allure the people in buying environmental friendly and products with third party certification like Forest Stewardship Council (FSC).

Thus, when we all work hand-in-hand in promoting afforestation and preventing the felling of trees for transitory needs, we can surely pave the way to a greener environment.
This brings to my mind, a quote by Dr.Suess. It will surely leave you in a moment of deep introspection, like it did to me.
“I speak for the trees,
for the trees have no tongues.”
The Lorax, Dr Seuss.