You are here: Home \ Environment \ Science \ Endangered Species – Humans are the culprits
Environment
0

Endangered Species – Humans are the culprits

When we think about the humans as a whole in the fabric of the cosmos, and introspect on how important we are in God’s scheme of things, if there is such a Supreme Being, we would probably find that no matter which way we think of it, humans are no more than ants that scurry […]

When we think about the humans as a whole in the fabric of the cosmos, and introspect on how important we are in God’s scheme of things, if there is such a Supreme Being, we would probably find that no matter which way we think of it, humans are no more than ants that scurry up and down a mountain, unmindful of the effect that they have on the mountain, because, practically speaking, they don’t (have any kind of effect on the mountain).

It is the exact same thing with the humans and the Universe. Current estimates put the number of galaxies itself at around two hundred billion, with some going even higher that five hundred. That is about seventy times the number of people on our planet. Now, out of all these, only one tiny blue planet, whizzing about in the same path, retracing it one every three hundred and sixty five days, give or take a few hours has so far been found to support life as we know it. Just take a moment to think about the gravity of this fact. One galaxy among a couple of hundred billion. One star among a couple of hundred billion in that galaxy. One planet out of all the planet, asteroids, random rocks and what not that revolve around that star. That is all that has been found to support life. We humans really are alone in that Universe. In an abstract sense of the word ‘Endangered’, one could argue that we are amongst the most endangered species in the Universe. But unfortunately, since we are the only ones present that are (to use a Star Trek term since we are discussing the Universe and all that) ‘Sentient’, we can classify only those that are in a far worse shape than even us humans as endangered or not.

That some species of life on our planet, which by the way, evolved as an abomination, as a freak of nature, are endangered is a pathetic situation in and of itself, but that humans are the cause of most of this endangerment is a reflection on how indifferent we have been to the beseeching cries of the our comrades-in-arms, our only companions in this vast Universe.

Endangered species are those which have been classified by the International Union for the Conservation of Nature (IUCN) as likely to become extinct. There are currently over three thousand animals and over two and a half thousand plants that are classified as endangered.

The prime reason for species becoming extinct is something that has been going on for millennia, since the time man took his first steps on this planet. Survival. Initially, man hunted and fished for food. As time went by, human population in an area become bigger and bigger, leading to over hunting and over fishing. This has been leading to the gradual extinction of prey for millions of years. There are many classifications by the ICUN depending on how likely the species is to become extinct. Some of these categories are endangered, critically endangered, extinct, extinct in the wild, vulnerable, least concern, etc. The names are pretty much self-explanatory.

Though these animals are nearly extinct, one could say that they are the lucky few whose extinction has been previsioned. Thus steps have been taken to stop them from becoming a distant memory in the not too distant future. There are a lot of plants and animals that have been wiped off the face of our planet for good, to probably never be seen again. One of the most famous examples of this is that of the Dodo. It was a flightless bird that was endemic to the island of Mauritius. The first recorded discovery was in 1598. The last recorded sighting was in 1662. Hordes of Dutch sailors hunted the Dodo for its meat and their pets made a prey of this flightless bird. Thus, less than seventy years separate the first and last sighting that have been verifiably recorded of a whole species of organisms. Only pictures remain. Humans certainly do work fast, don’t we? 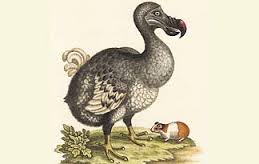 There are many, many other examples of animals that have become extinct solely because of human activities – the great Auk, the Bubal Hartebeest, Javan Tiger, Sea Mink, Quagga, West African Black Rhinocerous, to name a few. All of these animals once ruled their territories in large numbers, until we humans asked them, not too politely, to move over.

Because of humans, a few changes take place which cause the organisms to lose their living area and become a thing of the past. Over exploitation, change of habitat of the animals due to human activities like converting forest to farmland, pollution, climate change and introduction of invasive species by humans which fight for resources with the indigenous ones are a few such reasons.

These animals, plants, fish and everything else on Earth deserve just as much of a chance and have as much claim to it as humans. Since they can’t do it themselves, it is our duty to ensure balance between all species. It’s not hard to fulfil this duty either. Nature flourishes best when left to her own means. We just have to sit back, relax and most important of all, STOP MEDDLING.