Environmentalists Who Are Responsible For the Air We Breathe 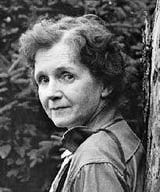 Environmentalists who are responsible for the air we breathe

Environmentalists are the persons  who is concerned with the maintenance of ecological balance and the conservation of the environment .i can treat every person is Environmentalist because every person is affecting Environment positively or negatively.but some of the Environmentalists are their who are now responsible for the air we are breathing now.Environmentalists have had a big impact on our lives, but most people can’t name one famous environmentalist.In my article i can focus on some of the Environmentalists.
Rachel Carson:
Rachel Louise Carson was born May 27, 1907, on a farm near Spring dale in western Pennsylvania. Many biographers believe her mother, a teacher — and her childhood in a wooded rural area — helped to instill in Carson a love of the natural world. Carson was a gifted writer and was recognized by the Bureau of Fisheries for her contributions to their radio programs, informational brochures and other products. She also continued to publish articles in newspapers and magazines including the Baltimore Sun, the Atlantic Monthly and other publications. Carson eventually became editor-in-chief of all publications by the newly formed U.S. Fish and Wildlife Service.
Her work has been cited as one of the first and most robust defenses against human destruction of the environment. For the first time in the post-war era, an entire industry was forced to acknowledge its effect on the natural world. In 1972, the use of DDT was banned in the United States; many other countries had already stopped its use.

Carson is also credited with helping to create the Environmental Protection Agency (EPA) in 1970. Before that time, the Department of Agriculture was responsible for regulating pesticide use while also promoting agricultural interests — Carson called this a blatant conflict of interest.
Edward Abbey:
He was born Edward Paul Abbey on January 29, 1927, in Indiana, Pennsylvania, and grew up in the nearby town of Home. His unorthodox upbringing is often credited as influencing his later career: Paul Revere Abbey, the boy’s father, was an avowed atheist and socialist who subscribed to the journal Soviet Life. His liberal mother, Mildred Postlewaite Abbey, was a teacher and church organist who advocated the ordination of homosexuals.
Edward Abbey started his environmental career as a quiet loner, and ended up being one the world’s most celebrated voices of political dissent and environmental preservation. A somber, reflective man, he nonetheless advocated aggressive action against environmental destruction in books such as Desert Solitaire and The Monkey Wrench Gang.
Wangari Maathai :
Wangari Maathai was an inspiring environmental leader, yet she endured a lifetime of ridicule, violence, imprisonment and other indignities. Her success in developing Africa’s Green Belt Movement, however, earned her international fame and a Nobel Prize.
In 1966 she as started a job as a research assistant at the University of Nairobi, only to discover upon her arrival that the job had been given to someone else. Undaunted, Maathai went to Germany to continue her studies at the University of Giessen ; she completed her doctoral research in biology at the University of Nairobi, and in 1971 became the first woman from East Africa to be awarded a PhD.
In 1977 she has started Green Belt Movement.As the movement grew, Maathai was able to pay women a small stipend for finding seeds and seedlings, and to pay them for planting these in Green Belt areas throughout Africa. The program, whose aim was to preserve the environment while providing firewood as well as employment, received funding from the United Nations and the Norwegian Forestry Society.
*  In 2004, Maathai was awarded the Nobel Peace Prize for what the Nobel committee called “her contribution to sustainable development, democracy and peace.”