You are here: Home \ Environment \ Free as a Bird? Not really-Bird Trafficking
Environment
0

Free as a Bird? Not really-Bird Trafficking

The blue coat and the thick layer of long feathers were almost radiating glory. I said ‘almost’ because, it was a rather sad sight. The pair of blue Brazilian macaws were stuffed in a cage half their body size and were jangling in the back of a truck while it made its way through the […]

The blue coat and the thick layer of long feathers were almost radiating glory. I said ‘almost’ because, it was a rather sad sight. The pair of blue Brazilian macaws were stuffed in a cage half their body size and were jangling in the back of a truck while it made its way through the flea markets in Indonesia. When all the cages were safely unloaded after a travel of five days, they were given food and water. After making their way through half the world and half a dozen countries, changing more hands than they had changed trees, when these birds reach their buyer, they are already half-dead.
This is just a glimpse of what goes on in the world of illegal bird trade globally.

The Convention for International Trade in Endangered Species(CITES ) has laid down lists in great detail about the various prohibitions of trade in many species, including birds. Of the 300 plus species of birds traded in India, 36 have been enlisted by CITES as endangered species. 16 of these are the most endangered species in the world. 10 are in the Red Data Book. These statistics can go on and on forever. However, the trade is rather rampant. Parakeets or munia are the most traded birds in India. A lot of times it is not just the aesthetic value of the bird that attracts sellers and buyers but blind faith in their medicinal properties as well. In a lot of cultures, the eyes and claws of the eagle are supposed to bring good health to ailing patients. 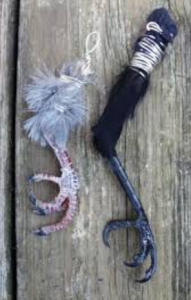 The white barn owl sells in lakhs of rupees during Deepawali in India due to the mythical legend that sacrificing a white owl, the animal carrier of Goddess Lakshmi brings prosperity and wealth. Many birds are simply trafficked for their beauty.

Birds’ communication needs are very high. Communicating, mating, migrating and living together in the same tree grove is of vital importance to birds and all of this stops when they are kept in captivity. Some birds have been recorded to actually die of a broken heart when separated from their partner. A lot of birds mate once in life and live with the same partner for the rest of their lives. They pine, grieve and show distress when separated from their love.

Confining wild birds to the drudgery of a cage often results in violent behavior on the part of the birds. Nipping telephone wires, chewing up cloth, throwing food around in their cage are common tantrums shown by them. As it is, the wild-caught birds are frightened and nervous and when they meet unknown humans, that is, the owners they act out in defense by trying to bite them. We need to understand that they have already suffered a lot and we need to give them time and space. Usually, the contrary happens and birds are shoved into their cage, never to be handled again. We should not have bought them in the first place!

In the forests, birds play an important role in keeping the ecological balance in place. No matter how small or big the bird is, it occupies a position in the food web and its removal wreaks havoc within the ecosystem. Birds are agents of seed dispersal and with every bird captured and travel from the forests of the bird-rich areas of the North-eastern states, Uttar Pradesh, West Bengal and regions near the Indo Gangetic plains and foothills of the Himalayas to the market. Broken legs and wings, starvation and extreme panic cause these deaths. Southern states of Maharashtra and Madhya Pradesh and regions in the Deccan plateau also feed this illegal poaching and trafficking of birds. A lot of large scale seizures happen each year and a lot many birds are confiscated but it is evident that the Wildlife Protection Act and the ban on trade in birds is quite ineffective. 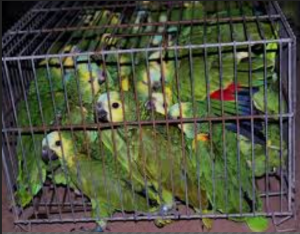 The Hoga Market in Kolkata is a big hub in bird trafficking. Traffickers from other regions buy birds from here in the morning when birds are freshly brought, trapped from the hilly regions of the state. Hati Bagan is another prime market.
The Nakhas market in Lucknow sells birds with little fear and no shame all the year round. Wild roosters, turkeys, parakeets, Shaheen falcons, baya, Sarus crane (it is the tallest flying bird in the world and in the CITES list of endangered species), etc. The market and the shops are absolutely unhygienic and a lot of birds die each day, only to be dumped in the River Gomti. Officials know this but turn a blind eye, their pockets being full.

Armed with little fear, an international clientele and a steady supply of birds, the Crawford Market in Mumbai is unarguably the largest flourishing market of bird trade in India. Rare seizures issued by the court are carried out but that is insufficient.

Birds are the true owners of the sky and definitely not meant to grovel in a grimy cage and be unhappy for the rest of their lives. If you already have a bird, make sure you give it ample space to fly around by building an aviary. Keep the enclosure clean and the diet proper. Better yet, set it free in its natural habitat. Peacocks are meant to roam free in the Indian forests and not walk on lawns of rich people.
Supply will only exist as long as there is demand. Don’t buy birds or keep them captive. If there are no buyers, the trafficking will wane away too.