Shocked to see your electricity bills going up and always up?? Want a fall and a drop in the burning hot bill to save your income?? On an average how much of your income is spent on the fuel consumption?? May be 10% to 20% every time. And still there is no fall in its […]

Shocked to see your electricity bills going up and always up??

Want a fall and a drop in the burning hot bill to save your income??

On an average how much of your income is spent on the fuel consumption??

May be 10% to 20% every time. And still there is no fall in its consumption especially in the urban areas where we have a good access to the electricity and fuel.

Have you ever wondered what do people in rural areas depend upon for their basic fuel and electricity needs like lighting up their houses??

They depend upon the very harmful and very dangerous fuel named “kerosene”.

Kerosene no doubt is a very familiar word amongst all of us but I am sure the three folds harm it causes to us is totally unknown.

In this situation of diminishing access and increasing population people most commonly rely on biomass fuels, predominantly on kerosene for light.

Just to jot down some of the basic damages that kerosene causes involves the environmental, social and economical degradation that I mentioned before.

Shockingly disgusting is that 60% of adult female lung cancer victims in developing nations are non smokers.

So what a smoker enjoys deliberately taking in the toxic smoke, the innocent people have to also suffer just because of the only biomass fuel to depend upon that is kerosene.

Also in India 1.5 million people, that makes up to a larger proportion of the population suffer severe burns each year primarily due to overturned kerosene lamps and also the poor quality of light and fumes that cause infections and cataracts are still to be added.

After a deepened hole in the environment and health, kerosene also makes hole in our   pockets. Fuel burns quickly and comparatively is expensive, so the individuals have an ongoing high overhead burden.

Also not only the burning of kerosene depletes our finite fossil fuels it also has a huge cumulative contribution to carbon- di- oxide emissions.

IT is shocking to that if used for four a day a single kerosene lamp emits over 100 kg of carbon di oxide into the atmosphere per year.

This never ending long list of the harmful effects of the kerosene would never last because we genuinely have no good reason to encourage its usage amongst people.

But it is also true that its elimination is next to impossible in our lives until and unless we have a good or I must say better alternative.

Gravity lights are just like another dream come true if we put a glance at its benefits.

It can be used over and over again anytime.

It’s entirely a green idea based on Newton’s idea of using gravity.

It has no running cost so it keeps your pockets puffed up and also it is long lasting.

The set up with which gravity lights have been made is inspiringly interesting. They can completely replace the harmful kerosene lamps for lighting purpose at least with no running cost involved and it would also pay for itself within a few months of not needing to buy kerosene for light.

The background story behind the gravity lights is also very interesting.

More than 780 million people lie on kerosene to light their homes. But the fuel is pricey and is toxic when burned. In 2008 London based product designer Martin Riddiford and his colleague Jim Reaves decided to create a cheap and safe alternative.

Riddiford knew that a falling weight could produce enough energy to run a grandfather clock so why not a light?

To find out he attached the crank of a wind-up flashlight to a bicycle wheel. He hung a weight from the wheel to cause it to spin, the wheel cranked the flash light and the device lit up.

Over the next four years Riddiford, Reeves and a small team spent their downtime between projects in a basement refining the Gravity lights. To use it a person hangs the device and fills an attached fabric bag with up to 28 pounds of rocks dirt or other material.

Lifting and releasing the bag steadily pulls a notched belt through gravity lights’ plastic hub, the belt spins a series of gears to drive a small motor which continuously powers an LED for about 30 minutes.

So what it takes is nothing and what it gives is everything we want.

If we put a close and sharp look on the comparison and replacement of kerosene with gravity lights we would draw conclusion that gravity lights are not as pricy and expensive as kerosene has always been.

In addition gravity lights are not threatening bane like the kerosene as they give us the three fold benefit that is the environmental social and economical benefits. 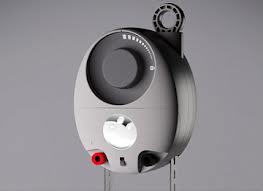