We all know of cars that run on gas and petrol and even lately batteries but guess what, off late the Indian car maker Tata Motors is contemplating the idea of bringing to market a car that runs on air. Yes you heard it right, simple air present around you and me. A car powered […]

We all know of cars that run on gas and petrol and even lately batteries but guess what, off late the Indian car maker Tata Motors is contemplating the idea of bringing to market a car that runs on air. Yes you heard it right, simple air present around you and me. A car powered by air, who would have thought! The basic principle is that the air is compressed to very high pressures and the potential energy stored is later used to drive the motors which in turn drives the car 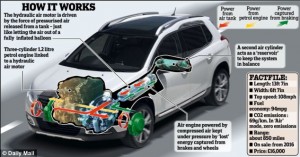 Below is in detail how the whole system works.

Engine- Compressed air cars are driven by motors which are powered by compressed air. This compressed air is stores in a storage tank capable of holding very high pressures as required by the system, up to about 35Mpa i.e. 35 mega Pascal. The compressed air motor works similar to that of a steam engine where the steam expands driving the engine but here the compressed air expands in a controlled manner.

Air storage tanks- This is where the highly compressed air is stored which later expands to drive the motor. Compared to the hydrogen tanks, the compressed air tanks do not catch fire on explosion as air by nature is not flammable unlike hydrogen. These days, storage tanks made up of carbon fiber are used in the industry which on explosion do not spread shrapnel around making it much safer than other tanks.

The most obvious advantage of a car powered by compressed air is the zero requirement of any fossil fuels and zero emissions which is environment friendly. The only energy required here is to compress the air from normal pressure to something as high as 35 mega Pascal which is anyway much cheaper per kilometer than gasoline. Also the added advantage is that it requires barely minimal servicing as there is no heat involved which is synonymous to a gasoline powered engine.

According to the laws of physics, compression of air results in lowering of its temperature. This property of air can be used in air conditioning of the car and hence saving energy.

Like almost everything in the world, the compressed air car also has various disadvantages. In the system used in working of the car, there are many stages and steps which involve energy transmission from one device to another and energy conversion in many forms during the working cycle. The above transmissions and conversions result in various energy losses which reduce the overall efficiency of the car.

Another issue is that, as the air requires a high amount of compression, it is not possible to carry out the compression at homes and one needs to visit places similar to petrol bunks in order to get the air compressed. As of now, there are not many such compressors at convenient places which is not very favorable for the widespread adaptation of this technology.

The car may not be able to operate in extreme weather conditions. If the humidity of the air is high, and due to the very low temperatures during the air expansion, the water present causes inner icing of the engine and the engine immediately comes to a halt.

The range of this car is not great compared to either a gasoline powered car or at least a battery powered car. According to the various tests carried out, the range is less than ten kilometers on a full tank of compressed air.

The car has undergone various crash tests and other standard procedures but nothing has been classified as yet. 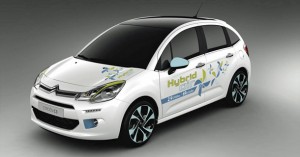 Even though the this technology looks impressive for a start, it definitely has a long way to go before it matures and be adapted as a permanent replacement or an alternative to the gasoline powered cars present today. However the efforts being put into developing this technology are encouraging and being supported by various institutions and organizations around the world including the Indian auto giant Tata Motors and French auto giant Peugeot Citroen. . Many car makers around the globe are very keen on developing this technology as many believe if this works, it can solve the fossil fuels crisis in the near future and can be a permanent game changer for the respective company as it puts the company in the control of car sales of the future.

The other options being looked at by car makers is the hybrid option, where in a car can run both on compressed air and gasoline. The car initially starts on the compressed air motor and once that runs out the car automatically switches it power source to a gasoline powered engine. French car maker Peugeot was the first one to release a hybrid model to the public. However it was not very well received by the public due to its high cost and various other limitations.