Relaxing on your chair in front of your laptop, the air conditioner in the room is keeping the cabin very cool, insulated from the outside heat. The salary would be a lot, multi-fold of the worker on that construction site in the scorching heat, his garments drenched in sweat. Do you think that the climate […]

Relaxing on your chair in front of your laptop, the air conditioner in the room is keeping the cabin very cool, insulated from the outside heat. The salary would be a lot, multi-fold of the worker on that construction site in the scorching heat, his garments drenched in sweat. Do you think that the climate change affects him, and has no effect on you?

Well, I think it is the time to think again because you do not reside on any other planet. And taking care of the planet you live on is your moral responsibility.

Multinational Companies are coming into existence very speedily and the number of offices is increasing day by day. More the number of offices, more is the energy consumption. The resources consumed in any office are much more than the routine usage of resources. Your air conditioner, the paper you use, other electricity appliances, the water usage per person increases drastically. Moreover, you have to carry your personal car to your office, to show off your status and comfort zone. 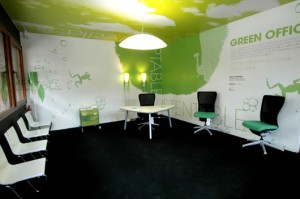 Can offices be made green, I wonder. Can these large buildings be made in such a design so as to ensure the reduction in the carbon prints they leave in the environment? Science has been able to answer most of the questions, so this one could not be left unanswered.

In a science exhibition, a group of students presented a model of a green office, which was quite impressive and a few modifications could make it turn into reality. 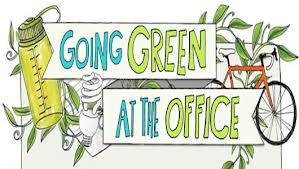 If we talk of going green at home, then why not at the office too?

Solar panels were installed on the building itself, all set in a particular direction, which produced continuous energy to meet the electricity demands of the building. To lighten up the building, optical fibers were used, which save a lot of electricity. The large trees were to be planted on the periphery of the building, which was done in such a way so as to accommodate an easy parking for the cars. So, this maintains a smooth parking system along with afforestation, which is generally avoided in these large offices.

The transport system of the office was run through Eco-buses. Currently, there are many buses which run on electricity. Their major benefit is that they do not run on petrol, therefore, the non-renewable sources of energy are conserved. This also promotes public transport and reduces the carbon emissions, which was produced from the cars of the employees.

The paper work in the office will be replaced by the e-work and only the necessary work will be done on the paper. Also, the nature of the paints and the adhesives used in the office could be eco-friendly, so as to maintain the cool temperature in the office even during summers. 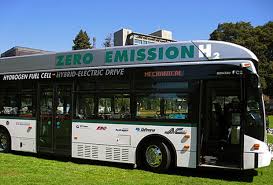 The Eco-Buses will help in the growth of public modes of transport and reduce carbon emissions significantly.

The idea of a green office is a huge step towards following green living. The number of buildings to be used as office is increasing very rapidly as countries is developing. The percentage of population involved in tertiary sector is significant in estimating the development of the nation. 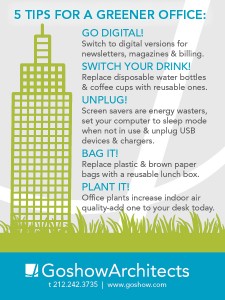 These are the five tips which can prove very helpful to make an office greener.

And the large scale consumption of resources and electricity in these offices can be easily prevented by taking some measures. The installment of solar panels and the use of Eco-buses are not very difficult and should be taken up by these offices. At the same time, there are some awards given to the greenest offices. If the government keeps a check on the amount of energy consumption of these offices and instructs them to take up certain measures, the situation will improve.

I wonder if the model can become a reality some day. The sooner, the better. The little step towards change will initiate efforts from many other people, and I am sure, that one day the whole world will stand up to protect the planet.