Natural gas plays a key role in any country’s energy resources and signifies the economic prosperity of the country. It also plays an important role in enhancing country’s clean energy prospects. But, when the natural gas is extracted at the cost of degradation of the environment and creating health hazards, to what level is it […]

Natural gas plays a key role in any country’s energy resources and signifies the economic prosperity of the country. It also plays an important role in enhancing country’s clean energy prospects. But, when the natural gas is extracted at the cost of degradation of the environment and creating health hazards, to what level is it justified. Lets have a look on this.

Hydralic fracturing is the process of drilling and injecting fuel into the ground at high pressure in order to fracture shale rocks to release natural gas inside. The technique is very common in wells for shale gas, tight gas, tight oil, coal seam gas and hard rock wells. It takes 1-8 million gallons of water to complete each fracturing job. Upto 600 chemicals are used in fracturing fluid including toxic materials such as Lead, Uranium, Methanol etc. Approximately 40,000 gallons of chemicals are used for fracturing. The fracturing fluid is then pressure injected into the ground through a drilled pipeline upto a depth of 10,000 ft. The mixture reaches the end of the well where the high pressure causes the nearby shale rock to crack, creating fissures then natural gas flows into the well. Previously, this well stimulation is usually conducted once in the life of the well and greatly enhances fluid removal and well productivity, but there has been an increasing trend towards multiple hydraulic fracturing as production declines. Due to this increasing trend of multiple fracturing for the economical benefits of the country, its impact on the environment has been totally neglected by the government agencies.

It is to be noted that how much water we lose in this process. For instance, there are 500,000 wells in 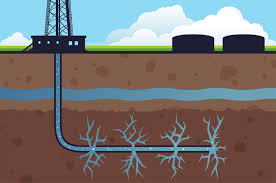 This diagram explains how the process degrades the soil and rocks.

During this process, toxic chemicals and methane gas release out from the system and contaminates the nearby groundwater. It is found that methane concentrations are 17 times higher in the drinking water near these wells. And methane has 20 times more effect as a greenhouse gas than carbon dioxide. There have been innumerable of water contamination next to areas of gas drilling as well as cases of sensory, respiratory, and neurological damage due to consumption of contaminated water.

Infact only 30-50% of the fracturing fluid is recovered, the rest of the toxic fluid is left in the ground and is not biodegradable. The waste fluid is left in open air pits to evaporate, releasing harmful VOC’s (volatile organic compounds) into the atmosphere, contaminating air, acid rain, and ground level ozone.

Hydraulic fracturing periodically produces microseismicevents which are detected by sensitive instruments. However, as of late 2012, there have been three instances of hydraulic fracturing, through induced seismicity, triggering earthquakes large enough to be felt by people: one each in the United States, Canada, and England. Although the magnitudes of these quakes has been smaller, the United States Geological Survey has said that there is no guarantee that larger quakes will not occur.In addition, the frequency of the quakes has been increasing. In 2009, there were 50 earthquakes greater than magnitude 3.0 in the area spanning Alabama and Montana, and there were 87 quakes in 2010. In 2011 there were 134 earthquakes in the same area, a sixfold increase over 20th century levels.

Methane gas is leaked from the wells continuously and it adds up to in the air, thereby, contaminating air.Also transportation of necessary water volume for hydraulic fracturing, if done by trucks, can cause high volumes of air emissions, especially particulate matter emissions (SPM). There are also reports of health problems around compressors stations. 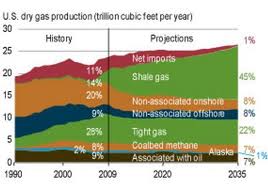 The productions rising in US, and the estimates in future go much higher.

Hydraulic fracturing produces approximately three lakhs barrels of natural gas a day, but at the price of numerous environmental, safety, and health hazards. Is it worthy enough? I do not think so. Do you?

There have been many instances where the name of development is misused by the industrialists and a lot of harm has been done to the environment in the process. But the current situation forces us to limit our activities strictly, follow sustainable development and save the planet. These human activities have already brought a lot of harm to the environment. Let us ensure there is no more. Let us pledge to stand against activities like Hudraulic Fracturing. Let us pledge to adapt our life styles in such a manner to suit the environment. Let us Follow Green Living.