You are here: Home \ Environment \ The Poisoning of Indian Rivers
Environment
0

The Poisoning of Indian Rivers

In the Indian sub-continent, the river system is classified broadly into four categories-the Himalayas, the rivers in the plains, the coastal rivers and those in the drainage basins. One of the largest basin of India is the Ganga or the Ganges which is originated from the Himalayas and considered to be abode of gods. Mythologically […] 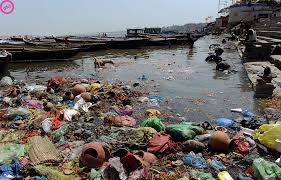 Clean us or otherwise you will kill yourself!

In the Indian sub-continent, the river system is classified broadly into four categories-the Himalayas, the rivers in the plains, the coastal rivers and those in the drainage basins. One of the largest basin of India is the Ganga or the Ganges which is originated from the Himalayas and considered to be abode of gods. Mythologically speaking, Hindus believe there is a spiritual significance in the Ganges and a dip in the river will abrade all sins. Then there are many more rivers like Saraswati, Narmada, Sindhu, Godavari, Tapi, Kaveri and Yamuna. These are all great rivers of India.

The function of a river is to nurture the life that depends on it (the flora and fauna) and to create the landscape. It is rivers that erode mountains and create land. The biodiversity and human cultures to a very large extent depend on the existence of a river. This water body in totality is more important than the water it carries, or the fish that swim in its water, or the sand that its floods bring down.

Due to the spiritual and cultural importance of rivers, the largest basin and the existence of aquatic flora and fauna degrade.  We ourselves are making our environment dirty by engaging ourselves in unhygienic and unhealthy activities which leads to the addition of wasteful materials to the rivers, Things have come to such a pass that the Ganga water is not only fit for drinking and bathing but has become unusable even for agricultural purposes.

The inhabitants living close to the bank of the river depend on these rivers for their existence. Even the rural and tribal communities’ lifestyles are so closely interlinked with the rivers that degradation of the rivers leads to jeopardizing of their existence. Also, the immersion of idol in the Ganges and other rivers have edged out pollution which brings out toxins and diminished flows of the rivers.

In some regions dead bodies are also flown into the rivers which dissolves toxins in the water. The increased consumption of water and collection of the water for generation of hydroelectricity is converting these rivers into a series of dry stretches and stagnant pools.

Apart from sewage disposal of half-burnt human bodies and hazardous medical waste from the hospitals, the absence of an incinerator is also adding to the pollution levels in the Ganges and other rivers in India. The industries close to the bank of these rivers dispose toxic fumes which is one of the major causes promoting global warming.

Even though the governments at various levels are trying to conserve the rivers, a lot still needs to be done. Programmes  like Ganga Action Plan(GAP) are launched by the Indian Government. But due to lack of proper plan, this initiative towards cleaning of river remained ineffective. A lot of money was spent to achieve the objectives of the Ganga Action Plan. But, we all are aware of the scenes near the bed of Ganga. Once the pious water which acted as a herbal treatment to us, now itself became ill serving us since long. It is our responsibility to treat the river as we are the only one who took the benefits of rivers. Other than focusing on economic and international relations, the cleaning of rivers should be the core policy of our government. Then only programmes like GAP will show some positive result. There is also a need for revision of government policies for the factories which dump their wastes in the rivers. There must be a strict check on the factories which directly dump the garbage in the rivers without treating them.

The grassroots communities especially in the hill stations have tried very hard to stop the flow of toxic material in the flowing rivers. One such initiative was started by a group of adivasis, environmentalists, human right activists against large number of dams built at Narmada river. As a community, we also should be conscious about the environment around us and take the necessary step wherever needed. The primary action that must be taken is checking the flow and naturalness of the water that flows in the river. It is also necessary to check the flow régime to sustain the in-stream functions of a river. Though development cannot be stopped, a proper planning method will always be beneficial in preserving the nature as well as developing the country.

Series of dams have also been constructed and very stringent rules in regard of reducing industrialization close to the rivers as eradication is not possible. Several researches are now being carried out in India, on the Himalayan Rivers and the drainage basins. These rivers pose one of the challenging studies for the researchers for quantifying the climate change impact on the water balance of rivers and make assessments on their low tolerance for disrupted flows and fragile ecosystems.

So now it is high time that we realize the importance of these rivers and take up adequate steps at whatever level we can, so that the problem comes to an end as soon as possible.