It would not be surprising at all to know that pollution is a central and perpetual problem in India. But it is definitely disheartening when we hear that a country as India so rich in culture and tradition has slipped by 32 ranks in the Global Environment Performance Index (EPI) in this year, 2014. India […]

It would not be surprising at all to know that pollution is a central and perpetual problem in India. But it is definitely disheartening when we hear that a country as India so rich in culture and tradition has slipped by 32 ranks in the Global Environment Performance Index (EPI) in this year, 2014. India currently ranks 155 globally and it’s shinning capital city Delhi has earned the dubious tag of being the World’s most polluted city. What a shame!!
Delhi like Mumbai and Kolkata is one of the most happening cities in India. It is fondly called the “unlovable city”. It is the capital city with a collective ambition, fashion, business, Government and more. It is rich in cultural heritage like Jama Masjid, India Gate, Lotus Temple, Red Fort and various such historic places which have left an ever – lasting impression on the visitors. It is one of the oldest cities in our country but with the most advanced technologies and facilities. It has the best of highways, sports facilities, metro service, restaurants in the country. With the usage of CNG cylinders in the transportation sector Delhi, the capital city of India created another mark among the other Indian cities. Despite so much modernization the glorious and shinning capital city is now blacklisted as the world’s most polluted cities.
A comparative study of 178 countries on nine environmental parameters released by the US based Yale University helped draw the conclusion on Delhi’s position in the chart of the most polluted cities. It showed how one of the world’s fastest growing economies is now becoming a disaster on the environmental front.
Reports suggest that the national capital has the highest concentration of (Particulate Matter less than 2.5 microns ) PM – 2.5. And this is considered to be the most serious of all and the cause of respiratory diseases and several other health problems. The situation is so bad in the capital city that the air has PM – 2.5 concentration of 153 micrograms and PM – 10 ( Particulate Matter less than 10 microns) concentration of 286 micrograms. This is way beyond the permissible limits, reports WHO. 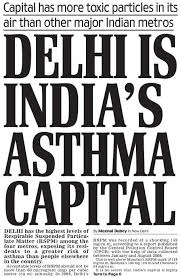 Environment problems pose the biggest threat to the capital city’s inhabitants and it flora and fauna. Over-population and over-use of natural resources has lead to such disastrous environmental conditions. From the transportation sector, the air quality is being deteriorated to such an extent that most of its residents complain that they are mostly surviving on artificial air more than the pure air. These 2- wheeler, 3-wheeler and diesel powered trucks and buses not only dirty the air in the city but also are a huge source of noise pollution. The presence of heavy industries and factories too contribute to the worsening condition. Lack of solid waste treatment and dumping of wastes in the holy river Yamuna has added to the water pollution problems. The Yamuna river is the sole reason for Delhi’s existence and the Dissolved Oxygen (DO) level has drastically dropped down from 7.5 milligrams per litre to 1.3 mg/l. Construction of thermal power plant, construction activities and open burning activities have put a lot of pressure on the air quality in the city’s capital.
Air pollution is now responsible for several health problems in the urban region. This has caused the mortality and morbidity rate to shoot up. This has also lead to an rapid increase in the number of respiratory problems among the Delhites. Also there was a significant increase in the obstructive and restrictive type of lung functioning. Non – respiratory effects like chronic headache, skin irritation and eye irritation was also observed among several people. Every two out of five people complain of health problem in Delhi. 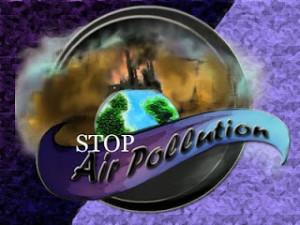 Delhi’s air pollution levels have almost doubled since the last year (44%) . To add to the misery 1400 vehicles are added to the capital city’s road everyday. All this makes it even worst in the cooler months by thickening the smog layer. The Government of Delhi has taken several steps to reduce the level of pollution in the city. But more needs to be done in order to further reduce the menance caused by air pollution, which is regarded to be the fifth deadliest killer. Government efforts alone are not enough. Public participation is very crucial for controlling the scenario. Usage of public transport should be promoted, limiting the number of vehicles, imposing a annual road tax, educating people to switch off engines at traffic intersections, improved fuel and reducing the rate of CNG are some measures that could be undertaken by the Government to have a upward hand in controlling this declining situation.
Delhi’s air has become a disaster and nobody seems to know what to do about it. Everyone is clueless and awestruck. Delhi’s condition is way ahead of Beijing and Shanghai which ranked among the most polluted cities. Delhi today faces pollution nightmares while Beijing and Shanghai look like heavens of clean air and vitality. Despite the use of CNG in the transportation sector, the air of Delhi stands out be the most deadliest disease of all. Authorities warn that if the situation persists then one would be able to hear another sounds from the neighborhood every morning- besides the grinding of pestle and mortar and that would be of coughing.
We all need to wake up and realize the need of strict implementation of emission control guidelines to be on par with the US and Europe. We are expected to take over China by 2030 in terms of population and a developing economy as ours would not like to be tagged as ‘dirty’ or ‘most polluted’.