The sun is a bountiful source of energy providing us both heat and light. The earth receives nearly 4000 trillion units (kWh) of energy from the sun on a daily basis. As you all know, solar energy not only sustains life on the Earth, but is also the source of almost all forms of energy […]

The sun is a bountiful source of energy providing us both heat and light. The earth receives nearly 4000 trillion units (kWh) of energy from the sun on a daily basis. As you all know, solar energy not only sustains life on the Earth, but is also the source of almost all forms of energy used by human beings. Most parts of India get a good amount of sunshine throughout the year. Therefore, solar energy is a good candidate for fulfilling our energy needs. Solar energy is made available to us through a variety of processes such as solar heating, solar water heating, photovoltaic energy and solar thermal electric power. It can be used in stand alone systems or to supplement other systems. You may like to know how to use these technologies in your own home and surroundings. So, in this article, I acquaint with the solar technologies, which are relevant in the SAARC and the Indian context.

The energy in the sun is experienced by us in the form of sun and light. Sunlight is generally used to produce electricity, while heat in the sun’s energy finds use in water heating, desalination, power generation, crop drying, space heating etc.  These applications are possible due to the advances in Solar Photovoltaic and solar thermal technologies. But as, these technologies have high initial costs, the main advantages are that the fossil fuel and electricity consumption is decreased leading to lower energy bills and reduced CO2 emissions. 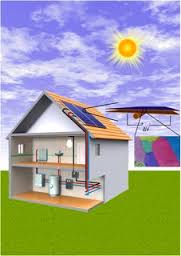 We will now move on to solar thermal technology and its application. Have you ever been inside a closed vehicle on a sunny day? Did you experienced a warmth inside it? It was due to the energy in the sun’s rays. There are many commercial uses of this energy too such as we can dry leaves, spices, cardamom, fish and several other commodities using solar energy. The solar thermal technologies utilise solar energy for heating water, space heating, cooling, drying, water purification and power generation.  Solar collectors are the heart of most solar thermal energy systems. The collectors absorbs the sun’s energy and transfers it to a fluid or air, which gets heated up. Hot fluids or air is then used to warm buildings, heat water, generate electricity, mainly used for nearly any process that requires energy.

Solar thermal collectors is one of the device that make these applications possible. They are used to collect solar radiation and transfer the energy to a fluid passing in contact with it. The collectors are mainly of two types i.e non concentrating or flat plate type and concentrating or focusing type collectors. Flat plate collectors, used for temperature ranges below 90*C, are the most common collectors for residential water heating and space heating installations, whereas, Focusing type collectors make use of parabolic mirrored surfaces to concentrate solar energy on an absorber called a receiver. Solar thermal technologies finds many uses in cooking, heating, water, drying, space heating and cooling, desalination, greenhouses and also power generations.

Now moving on to the solar photovoltaic technologies, in India, it is not possible to electrify each and every remote corner of any country by the grid due to the prohibitively high cost of extending the grid to such areas. This brings into sharp focus the role of sunlight derived electricity. One of the most interesting and aesthetically appealing applications of solar energy is the Solar Photovoltaic (SPV) technology.

The principle underlying Solar Photovoltaic Technologies is that when sunlight falls on special cells called solar cells, electric voltage and current are generated. These cells are made up of semiconducting materials such as silicon, but before being processed as a solar cell device, it is first purified to the Electronic Grade (EG). The chips found in modern day computers and mobile phones are also made of electronic grade silicon. There are a few more solar cell materials like Cadmium Telluride (CdTe), Copper Indium Diselenide (CIS) and Gallium Arsenide (GaAs). Normally, a single solar cell generates 1 wall of useful power and even more depending on its conversion efficiency. Power thus generated is fed to the battery and can be drawn when actually needed. You may be wondering if we can get more power from a solar cell on a hot day. Actually solar cells work, best at ambient temperature of around 25*C. Higher temperature reduce its power producing capacity. 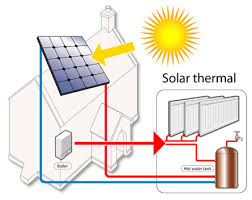 Modern Photovoltaic system technology enables us to meet our power requirements in the milli-watt to megawatt range. PV cells produces between 1-1.2 watts of power. Around 36 such cells are normally interconnected to form a solar module. An assembly of solar modules known as solar array is capable of meeting higher power requirements. Power produced by a solar module during the day is useful only if we have to run, say, a water pumping unit. However, if we want to operate a light at night, a battery is also needed. This means that PV power can be stored in the battery for night time use.

SPV systems suffer from a few limitations, e.g., the intermittent nature of sunlight, availability of solar energy only during day time, and high initial capital cost. Besides economies of scale are still not realised in large number of situations due to continued dependence on donor aid programmes. Battery is still a weak link in the PV system.

SPV systems are mostly used for indoor and outdoor lighting, water pumping, telecommunication, refrigeration and signalling etc. PV for buildings is a fast emerging area, where in the solar modules are architecturally integrated into the building envelope. Hope you all like this article. Stay bless, stay happy 🙂 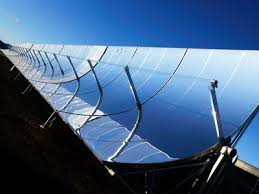