In the race towards development and self-sufficiency, most of the countries have realized the need for renewable energy. With many countries having realized their potential have brought in use the various methods of renewable energy, many yet are to discover and implement the methods to generate energy. Renewable energy is a lot preferable in the sense that it requires some investment in the beginning of the project but later assures constant energy output. The resources used are freely available in nature and can prove very beneficial for the long run. Apart from following green living and contributing towards the greener earth, sufficient resources for renewable energy make the country efficient and independent.

India has depended on its resources of coal and minerals for the production of energy. It is due to this large scale consumption of coal and natural gas that the resources are becoming scarce and thus, need to be replaced by some alternative resources of energy. Moreover, the conventional sources of energy are non-renewable and pollute the environment. In the process of realizing its renewable resources, the government of India has done a significant job in using hydro electricity. Many dams have been built on major rivers which produce electricity and serve other purposes as well. But it is the slow development in the field of solar power that needs to be emphasised upon. 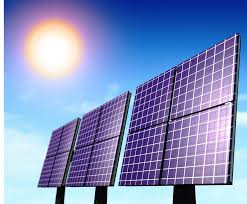 In a large country like India where there is a huge difference between the demand and production of the energy, the latter usually cripples behind the former. The climatic conditions in India, its being a sub-tropic country, makes the setting up of solar power plants favorable. With more than 300 sunny days on an average, there is a lot of unleashed potential for solar energy. While the formation of being a completely self-sufficient nation will take a much longer time, but surely the use of solar energy has increased by large percentage in the past few years.

In the last decade, The various state governments as well as the center government have been active in understanding the role of solar power sector for any government as well as for the planet. It is the seriousness of the threat posed by global warming which has made the implementations fast in this sector. The top states which have recognized the prospective and are fast in the growth of the sector are Gujarat, Madhya Pradesh, Rajasthan, Punjab etc. Recently, one of the largest solar power plants was launched at Neemuch (Madhya Pradesh).

There have been proposals from the Players from Gulf nations to invest in the technology as well as finance of the country. Many manufacturers from Gulf countries have shown interest in collaborating with Indian companies, which is surely a great indication towards the solar power sector in the nation. The total commission capacity in India is about 2,208.36 MW. Such friendly collaborations from other countries will help India realize its aim of increasing its dependency on renewable resources.

Other than the larger power plants which are set up by the state and the center government funds, there are many small scale solar power plants which on their scale fulfill the demands of the area. For instance, IIT-Kanpur has its 50KW, which they are aiming to extend to 750KW. Similar is the case in Shirdi in Maharashtra, where they use the solar steam power plant. With its help, they are able to cook meals for more than 50,000 devotees daily and thus save about 100,000 kg of cooking gas. Such small solar set ups are many, but add a lot to the solutions to the environmental problems. 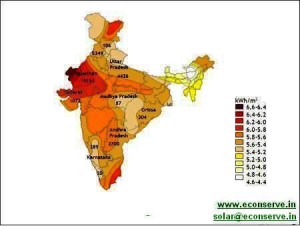 One such idea behind the small scale solar set ups is lighting up the villages. These small scale projects are easy to install and provide benefit to the whole region. This will meet the demands of the villages and thus, will keep the pollution away from them. In a similar manner, a college or a hospital can have some solar panels installed on their roof which will help in meeting the energy requirements of the buildings. The factories which need constant heating can work on solar energy, directly or by solar electricity. Even your own locality can set up solar panel which will cater to the electricity requirements of the houses.

The best thing about Solar energy is that it is consistent, unlike wind energy or tidal energy. The need of the hour is to generate awareness among the masses and initiate programmes. Such active measures towards the generation of energy through solar power plants bring India on the path of becoming a pollution-free country. Although most of the solar power projects are on a start-up and still need a long way to go, but investments in finance and technology can result in speedy progress in the race of being an energy efficient nation.