The Urban Heat Islands can be defined as any urban area which has the tendency to be warmer than a surrounding rural/lesser developed area. Some of the earliest incident of heat islands were observed in late nineteenth century in cities such as London, Paris, Berlin and other European cities which were major centres of industrial […] 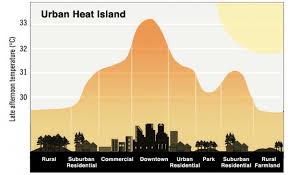 The Urban Heat Islands can be defined as any urban area which has the tendency to be warmer than a surrounding rural/lesser developed area. Some of the earliest incident of heat islands were observed in late nineteenth century in cities such as London, Paris, Berlin and other European cities which were major centres of industrial activity.

Today, the phenomenon of Urban Heat Islands (UHI) is an existent issue of concern in many cities of both developed and developing countries around the world.

Causes for the arising of Urban heat islands are many. The principal reason for the nighttime warming is that the short-wave radiation is still within the concrete, asphalt, and buildings that was absorbed during the day, unlike suburban and rural areas. This energy is then slowly released during the night as long-wave radiation, making cooling a slow process. Eventually, this process lead to hot urban areas than rural areas.Other cause are the lack of vegetation( leads to less evapotranspiration) and changes in thermal properties of surface materials.

Absorption of heat by urban infrastructure involves the following mechanism.

Apart from excessive heating of the land surface, UHIs result in altering of weather and climatic phenomenon around the city centre. It includes changing of local wind patterns, interrupts the development of fogs. As a result, varying humidity and irregular precipitation become common these days. We all must have noticed unseasonal rains, intolerable heat in summmers and excessive chilling winters these days. One of the reasons for these disrupted phenomenon can be UHIs.

UHIs have the potential to directly influence the health and welfare of urban residents.Warmer days and nights, along with higher air pollution can contribute to general discomfrt of the people living in cities. Leading to respiratory difficulties,heat cramps and exhaustion, heat strokes and heat related mortality. Not only health, but heat can also affect behavior. A U.S. study suggests that heat can make people more irritable and aggressive, noting that violent crimes increased by 4.58 out of 100,000 for every one degree increase in temperature.The nighttime effect of UHIs can be particularly harmful during a heat wave, as it deprives urban residents of the cool relief found in rural areas during the night. Within the United States alone, an average of 1,000 people die each year due to extreme heat. Research has found that the mortality rate during a heat wave increases exponentially with the maximum temperature, an effect that is exacerbated by the UHI.

It also lead to increase energy consumption in a world where we are talking about optimum utilization of resources available. Higher temperatures in urban centre increase energy demand for cooling and add pressure to the energy grid during peak periods of demand. Increasing energy demand results in greater emissions of air pollutants and greenhouse gases from powerhouse plants. Higher air temperature also promote the formation of ground level ozone.

UHIs also pollutes water quality. Hot pavement and rooftop surfaces transfer their excess heat to stormwater, which then drains into storm sewers and raises water temperatures as it is released into streams, rivers, ponds, and lakes. Additionally, increased urban water body temperatures lead to a decrease in diversity in the water bodies. Thus, it disturbs the whole water ecosystem including coral reefs.

Some mitigation measures to reduce the highly disruptive impact of UHIs are mentioned here:

Its high time now to start up and make you city clean and green rather than complaining about the scorching heat. This is the fault of we people only and we are the ones who can improve the prevailing conditions for a healthy life ahead.