You are here: Home \ Environment \ Resources \ Are our Villages Ready to be Globalized?
Environment
0

Are our Villages Ready to be Globalized?

It is high time that we are heading towards a world of globalization and materialism. Capitalism seems to have taken over everything else. Internet and Insustrialization are commanding people’s life styles all over the world. While accelerating in its primary methods of production i.e agricultural practices, India has been quite fast in adapting itself to […]

It is high time that we are heading towards a world of globalization and materialism. Capitalism seems to have taken over everything else. Internet and Insustrialization are commanding people’s life styles all over the world. While accelerating in its primary methods of production i.e agricultural practices, India has been quite fast in adapting itself to the pace of the rest of the world. Secondary and tertiary sectors are developing at a fast rate, which are changing the employement scenario in the society.

But along with the change in economics, there is a huge change in the environment at the same time. The large industrialists are quick to observe the availability of quality resources in villages, which is home to the simplest people living on the earth. This has made them set up industries and factories in villages. Now, every large industry requires a lot of land space and other raw materials like water and electricity. The land which was earlier covered under forests or fields gets converted to a large factory. The resources in the villages are exploited, and the benefits go directly to the bank balance of the owners. 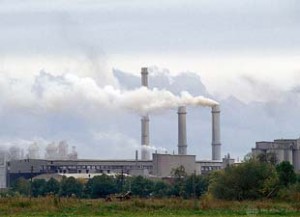 These industries release a lot of gaseous, liquid and solid wastes in the village area, which pollutes it. As villages do not have many motor vehicles, the major cause of pollution in the villages are these factories. Moreover, the working conditions for the workers are very poor and unhygienic. Although setting up of any industry provides employement to the skilled and unskilled workers of the village, It at the same time pushes the village towards urban set up of living.

The industrialization gradually leads to urbanization of the village. More and more people start coming and setting up in villages after ample job opportunities. Gradually, there is an inflow of people in the area and outflow of the resources. More motor vehicles occupy the roads. The village turns into a town, and soon, into a big city.

If seen from the prespective of a businessman, I think villages are the best place to invest in. Cheap land costs, availability of raw materials, cheap labour- All situations are favourable. But when it comes to environment, there are issues which need to be adressed. The land which was earlier covered by the forests is used either for farming or for the setting up of industries. This reduces the covering of the forests and thus, increases the level of pollutants in the atmosphere. The waste dumped by the industries and the households increases the land pollution in the area. 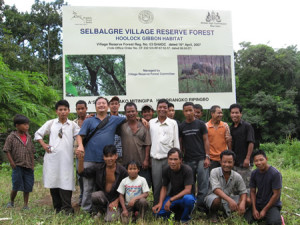 We do need such programmes, which help in preserving the villages.

But unfortunately, this ‘development’ of villages into cities directly leads to threats like global warming. Now, let us try to figure out a solution to this problem. Obviously, the unlimited favourable conditions for an industry are too tempting for any industrialist to care for environment. But what if there are rules and regulations which can limit the industrialization in any village.

There must be adequate check on the waste products released by these factories. New scientific methods need to be discovered, so that the waste products are reduced in quantity and toxicity. This can be achieved through ‘Green Chemistry’. The deforestation in villages should be reduced, rather afforestation should be promoted. To meet the requirements of these industries, forests are cleared, which demolishes the whole purity of the villages. There are many NGOs and programmes which aim at conserving the atmosphere of the village. These programmes must be supported, which help in maintaining the basic form of these villages. 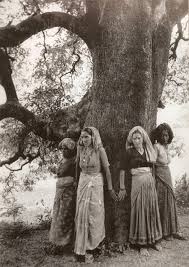 A photograph of women of the village surrounding the tree, the concept of the Chipko Movement.

There are many self help groups in villages which provide an economic structure to the village, thus making them less dependent on the shahari babus. One such very famous movement was the Chipko Movement started by Sunder Lal Bahuguna. The idea was simple, to hug the tree whenever someone came forward to cut it. It was a big success in Uttarakhand and then later in Gujarat.

Villages are very precious to our nation as our basic and the most simplest form lies there. Home to a rich cultural and natural diversity, the villages still have pure oxygen to breathe, unlike the soot-mixed air of the cities. Mahatma Gandhi said “The future of India lies in its villages” Like every other post, this post also leaves a question for you. Are our villages ready to be industrialized, urbanized and thus globalized? What do we prioritize- making money or saving nature?