You are here: Home \ Environment \ Health \ Science \ A1 or A2: Which Milk Would you Prefer?
Environment
1

A1 or A2: Which Milk Would you Prefer?

The A1 and A2 are the two variants of beta-casein proteins found in cow’s milk. Now one of them happens to have some serious side effects that can result in health conditions like schizophrenia, type-I diabetes, Parkinson’s disease, autism etc. By the very sound of it, you may be inclined towards choosing the A1 variety […]

The A1 and A2 are the two variants of beta-casein proteins found in cow’s milk. Now one of them happens to have some serious side effects that can result in health conditions like schizophrenia, type-I diabetes, Parkinson’s disease, autism etc. By the very sound of it, you may be inclined towards choosing the A1 variety but that may just be a big mistake and more so if you are making the decision for a child as their underdeveloped immune system could expose them to a range of medical conditions that can be life-threatening.

A2 is the original milk protein found in cow’s milk and has benefits that you primarily expect from your milk as an elixir. However, the A1 beta-casein protein, which is found in the western breed, Holstein cow, is a result of a mutation that happened years and ages ago. But they provide higher quantity of milk as compared to the Indian or Desi cows. So almost all the cows in India have been mutated with the Holstein cow to get greater yeild and the results are appalling. The A1 milk protein can have devastating consequences on your heart, brain and immune system. The culprit here is the beta-casomorphin-7 or BCM-7 which is a molecule that is generated from the breakdown of milk in the colon.

BCM-7 is not generated in case of A2 milk and herein lay its superiority. The problem here is just one of those amino acids in the chain of 229, where the number 67 is histidine which does not bind tightly to the sides of amino acids, whereas had it been proline, we would not have this problem. It is histidine that after breaking down forms a string of 7 amino acids which is called BCM-7. 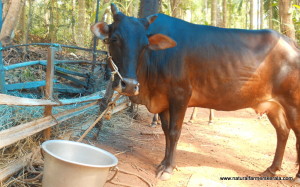 The Indian breed gives A2 milk but that is not a reason enough for us to stay calm and watch the case of nutrition go all wrong for so many others. Here, we are affected too as the Indian breed of A2/A2 has come to a point of extinction with almost all the farmers in India taking the root to genetic engineering. At first, it was a simple formula. The Desi cattle produced a thick fine quality of milk, rich in nutrition and taste but there was one legitimate complain that the farmers had. It hardly gave enough milk to meet with the expenditure they had on raising them.  With the advances in science and the common men having access to it, the Indian breeds were mutated with the western high yielding variety of the Holstein cows. The results were only too fulfilling but only quantity wise. The milk that they now produced was thin, less in nutrition and to make it worse, it could claim lives of children and people with a weak immune system.

Even if you go talk to your local farmers or farmers in any part of India where the raise cattle for milk, ask them about the change in the quality and quantity of milk after the large scale mutation that took place only a few years back. I assure you that they will be all praises about the desi cow and its desi milk but where is it to be found? I wonder if they would have an answer to the latter as the beneficial Indian breed has reached its point of extinction barring a few exceptions where certain farmers and organizations had deliberately preserved the Indian breed, realizing or contemplating its worth. With some farmers left with the Indian breed cows it just happens to be a matter of chance that they did not get their cattle mutated and nature is completely in their favour. 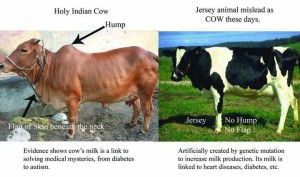 In countries like USA and New Zealand people can make an informed decision about the kind of milk they want to drink as of the two variants dominating the market, the consumers get printed information on the container so as to which one they are buying. They do have the privilege of just going to the market and picking up the A2 variant of milk. But as Indians, we have hardly even come across the development in true meaning of the term, forget about the consumer’s privilege. There is a motive working behind this as a number of large organizations which are involved in the dairy business would have to do away with their herd and that is exactly why they cannot afford to go public with this information. You cannot imagine the loss they will have to bear and therefore, the extent they will be willing to go to in order keep this whole story a secret. Things first started going in the favour of the public when Keith Woodford released his book, The Devil in The Milk, at least now someone was talking about the ugly truth. When our children had diabetes, numerous unbelievable cases of too young for the disease, at this stage we first got a glimpse of why it was happening to them. Children consume milk as their primary source of nutrition and no wonder it is what is believed to be their primary source of strength that was doing it to them.

Even for patients who are generally weak and further tortured with the consumption of the wrong milk. Apart from having narcotic properties which many cannot digest and causing inflammation, A1 milk even gets to your immune system damaging it. Choose a healthier future by switching to A2 milk. And if you want to know where to find it, first enquire locally about the cows that were not mutated and the next step will be to demand an answer from your government.