You are here: Home \ Environment \ Going Green \ Health \ The Benefits Of Cycling for Health and Environment
Environment
0

The Benefits Of Cycling for Health and Environment

Mumbai is a motorist’s city. I’ve been living here 20 years, but it took me only my first 3 to realize this fact. Petrol is cool, Diesel is smart, and CNG is the bare minimum. No-fuel is for the no-brainers, and the fashionably-challenged. Much better a crisp shirt than neon tights, right? Wrong. “Wrong, you […]

Mumbai is a motorist’s city. I’ve been living here 20 years, but it took me only my first 3 to realize this fact. Petrol is cool, Diesel is smart, and CNG is the bare minimum. No-fuel is for the no-brainers, and the fashionably-challenged. Much better a crisp shirt than neon tights, right? Wrong.

“Wrong, you say!? How so?” Well, that’s what I’m going to explain in this little article.

Let me start with the common conception in Mumbai. Time is money. So for those who want to save money, the car…no, the cycle is the better option. It is the faster means of travelling.

What! Are you medically stupid? No, I’m not. Just hear me out. The common misconception is that time taken for travelling depends on the speed of the vehicle. It is, in fact, the speed the vehicle is ALLOWED to travel at. In a congested city, you really will be hard-pressed to take your car up beyond 40 kmph. Even if you manage that, it will only be to screech to a halt before you’ve travelled a few feet. It’s more likely you’ll be up-and-stuck in a traffic jam ahead, and be crawling at a snail’s pace. Under these circumstances, you may find that a zippy little two wheeler, that is able to squeeze between tight spots and maintain a faster average speed will get you to your destination sooner. Even bikes may be too bulky, but a cycle is just right.

I was not a believer of this until my friend proved me wrong. We travelled from his house in Andheri East to mine in Andheri West. He went by cycle, and I caught a rick. I promptly got stuck in a jam right beside the highway, and he whizzed past me, and reached my house a few minutes before I did. He didn’t even ride very fast or break any signals. He just maintained a steady pace that beat the rickshaw’s occasional bursts of speed. Another fact that I may mention, although it wasn’t employed in the example I just gave, is that my friend would also have had a lot more access to paths that I could not possibly have fit through in the rickshaw.

Now let’s address the outfits. I will happily agree that cyclists wear really weird tights that I would not dream of wearing myself. First of all, they’re tights. Tights in my opinion look good only on girls and REALLY well-toned men. Secondly, the fashion is to wear neon tights. Maybe one day I’ll write my own fashion book… but all that later. The point is, would you like to look trim, fit and sporty, whilst maybe a little out of place ‘cos you’re on a 2 wheeler, or a handsomely dressed pot-bellied man in a crisp shirt with straining buttons? 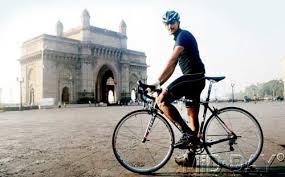 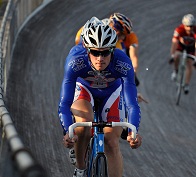 It is a fact, cyclists have muscles that are better toned, have enviable figures, and are all in all, much healthier people. I’ve listed some of the health-related benefits of cycling that you may not be aware of so that you can truly understand the magnitude of the impact cycling can have on you:

Researchers from the Stanford University School of Medicine asked people suffering from insomnia to cycle 30 min a day. The result was that the patients took half an hour less to fall asleep, and slept for an hour more.

Professor Jim Horne from Loughborough University’s Sleep Research Centre explained this saying, “Exercising outside exposes you to daylight. This helps get your circadian rhythm back in sync, and also rids your body of cortisol, the stress hormone that can prevent deep, regenerative sleep.”

This is no gimmick. Regular exercising, such as cycling, does make you look younger. Scientists at Stanford University have confirmed this. They found that cycling helps protect against UV radiation. Harley Street dermatologist Dr. Christopher Rowland Payne explains: “Increased circulation through exercise delivers oxygen and nutrients to skin cells more effectively, while ﬂushing harmful toxins out. Exercise also creates an ideal environment within the body to optimize collagen production, helping reduce the appearance of wrinkles and speed up the healing process.” Pretty neat, no?

Cycling increases the efficiency of oxygen being delivered to the brain, which stimulates receptors, especially in the hippocampus region of the brain, which is responsible for memory. Improvement in cardio-respiratory fitness led to a 15% improvement in the performance of people in mental tests, according to Researchers from Illinois University.

The University of Bristol conducted a study of 200 people. The employees who exercised before work were better at managing their time and their workload, and also dealt more effectively with stress.

So as you can see, cycling is extremely beneficial to you, but it doesn’t stop there. Cycling is also beneficial to the environment. It produces no pollution, and doesn’t consume fuel either. It is energy efficient too. By cycling, we can travel 4705 km for the equivalent energy of 1 gallon!!! That’s ridiculous! And just to pile on the ridiculousness: it takes only 5% of the material and energy that is used to build a car, for a bike.

And here’s the better part: 20 bicycles can be parked in the space of one car! And 3 bicycles can happily ride in the space a car occupies for driving. Most of the time, it is only one person in the car anyway, occupying so much road space. This city’s horrendous congestion, traffic, pollution, pedestrian-negligence, and fuel problems would all be solved if we simply adopted cycling as the most preferred means of transport.

It is commonly said that this city is unsuited to cycling, and is even unsafe. I beg to differ. I have witnessed many people cycling happily on the roads, but their numbers are so abysmal because this misconception is so deeply ingrained. If the number of cyclists continues to remain so small, then cars will continue to dominate, and as long as they do, the safety of cyclists will always be a question. Unless this city becomes a pedestrian’s city, we are doomed to traffic jams and commuting problems. Unless we spread support for cycling, it will continue to be sidelined. And the best way to do that is to pick up a cycle yourself. Start small, cycle only in deserted lanes, or for short distances, and as you feel braver, go further out. Let the process be gradual, but let it BE THERE. The change doesn’t have to be instantaneous, but we should at least be moving in the direction of change. It is for our own benefit, and the environment’s too.

Oh and I forgot to mention the most important thing… Cycling is SO MUCH FUN! 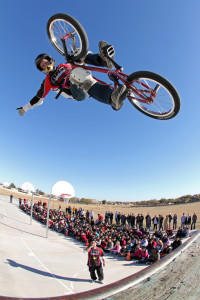 This is how you define FUN