You are here: Home \ Environment \ Going Green \ Life in a Village
Environment
0

Life in a Village

While trying to observe the type of readers of this website and thus my posts, the conclusion that I came up with was the most of the readers of this website are living in a metro city. Although many of them might have been to a village or have ancestral roots in the villages, but this article will refresh their memories of how things work out in the rural space of India.

I believe the rural population of India is very much connected to nature than the population residing in urban areas. The latter ones being surrounded by expensive life styles and pacing lives, while the former ones having a steady life and average resources. The highways in cities while kuccha streets in villages. Exorbitant cars in cities while cycles and bull carts in villages. Tall buildings in cities while little houses in villages. In short, cities can be called as the more ‘developed’ ones, or with which, human beings have done much more changes than the villages. Villages are thus, closer to the nature, more of the original form, with very little changes.

Cities represent the zone of race and competition, mainly commerce based. This fast paced life does not allow an individual to savour the gifts of nature. Whereas in villages, the primary occupation of most of the people is in primary sector, that is agricultural practices or occupation related to them. This allows them to spend most of their time in open sky. The vast expanse of the fields, with crops of wheat swaying in the air, all directed in one direction is just an amazing scene to forget. Or let it be the whole of the field in the standing water during the sowing season of paddy. The running tubewell in the hot June and a quick bath in the field.

A village scene will be a perfect shot for your camera.

Not only the people who are involved in agricultural practices, but others also enjoy their leisure time in the shade of nature. There is a huge difference in the living styles of the people of both. They are much happier without Facebook or Twitter. Their gmail service provider is the postman. People living in villages engage them in a lot of physical work, and thus, their diets are very healthy. They might not know what a PSP is, but the fantasy of Gully Cricket or Gilli Danda, Oh!

What do we call a rural area? The region where some population resides and which is not very developed. Development is talked of in the sense of capitalism and modernization. So, technically, urban areas or cities are more tampered with by human beings, while rural areas are somehow very less changed. For example, any individual living in the Himalyas will be more attached to natural surroundings, will know the perfect use of its resources and thus, will stay connected to nature. The reason being that the mountain regions, especially higher ones with minimal population have nothing artificial or man-made about them. Similar is the case with nature.

Many people argue that the villages are less developed in terms of medical and educational facilities, infrastructure and hygiene. But the fact is that they have there own living style and have adapted themselves to the life of the village. No doubt, there is fascination towards the charm and noise of the cities, but peace and serenity in a village is worth a visit.

This article does not say that one cannot connect to the nature while living in cities. Undoubtedly one can. The beach, where the two horizons meet, is one of the best views of nature. The parks provide that perfect space to be delighted in the lap of nature. And many more.

The point of writing this article to inspire you all, who are living in cities, to take a break from the life. Tell your boss you won’t be coming because you are going to a village in Punjab or Haryana or any rural area. Try to spend some time there. Walk barefoot in the fields. Chew the sugar cane there. Find various vegetables growing out there. You will find it strangely different from your posh lifestyle. But you will find it more than wonderful. Do not forget to take a camera with you, for you might want to click the pictures of a housewife, with a large bindi on her forehead and a smiling face. Or the sarpanch of the village smoking his hookah under the shade of the large Banyan tree. Or the boys jumping in the pond of the village. Luxury might not be a feature of the rural life, Happiness is. 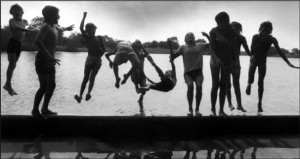 Does it need a caption?

Life is too short to be spent running in the city. Instead, make it memorable. What you’ll have for the entire journey is not the money, but memories of the morning you woke up before the sun to watch the farmer go to his work, to enjoy the buttermilk in the afternoon, to spend the evening while playing cricket and let pass the night spent staring the stars.

Come. Come to the villages of India 🙂