You are here: Home \ Environment \ Captive Breeding: Is it Really Any Good ?
Environment
0

Captive Breeding: Is it Really Any Good ?

‘So many baby crocodiles, dad!’ exclaimed Nigella, hoisted up in her father’s arms at the Madras Croc Bank, Chennai. To the wide-eyed child, it was a source of great amazement, but the concept of ex-situ conservation is something that the world has yet to come to a decision yet. There is great need of conservation […]

‘So many baby crocodiles, dad!’ exclaimed Nigella, hoisted up in her father’s arms at the Madras Croc Bank, Chennai. To the wide-eyed child, it was a source of great amazement, but the concept of ex-situ conservation is something that the world has yet to come to a decision yet.
There is great need of conservation of biodiversity on this planet where the only parameter of development is only in the urban sector. The nations are progressing at the cost of the only evolutionary progress that keeps balance in Nature: Wildlife. It is of immense importance that we save whatever remains of it. Wildlife encompasses all living forms including animals, plants and microbes, living in their natural habitat and keeping the delicate balance in the ecosystem structure. If this balance is lost, the consequences would not just be confined to the forests but will have adverse effects on humans as well.
Thus, the need for wildlife conservation arises. It is of two kinds:
• In-situ Conservation: This type of conservation involves conserving or protecting the wildlife in their natural habitat. We simply put protection around its habitat where it lives and reproduces freely. National Parks, Wildlife Reserves, etc. are examples of In-Situ Conservation.

• Ex-Situ Conservation: This type of conservation involves protecting the organisms outside their natural habitat. The organisms are protected in artificial man-made enclosures or ranges where the organism has to adapt to a new environment. Breeding Centers, Botanical Parks, Gene Banks are examples of Ex-Situ Conservation.
Ex-Situ Conservation has its many advantages:
• The chance of survival of the organisms and progeny is higher than the natural habitat as the factors detrimental to existence are absent in a man-made environment. Factors like draught, flood, predation, epidemics, etc. do not affect these organisms.
• The population is maintained and may be transferred to other such centers or geographical areas, which is not easy or feasible with in-situ conservation.
• The breeding programs are designed in such a manner to collect maximum benefits in the way of tourism and/or revenues. This capital helps in better facilities for the organisms.
• Rehabilitation and medical treatment is provided to animals belonging to endangered species to keep up their numbers.

However, it has its cons as well:
• The cost of conservation efforts increases manifold as compared to in-situ conservation. Everything from healthcare to feeding to protection measures bring in a big bill for the organizations to fill.
• The breeding programs hinder with the way of Nature and the natural evolutionary process. Natural selection and survival of the fittest do not apply in enclosures as there is no elimination of the individual with poorer genes. The gene pool is thus destroyed.
• The in-breeding programs cause the recessive faulty gene to surface and many genetic diseases crop up in frequent generations.

Breeding programs are a rather recent concept, especially in India. It requires a lot of man-power, management and capital investment. However, they are not successful at all times.

• Zoological gardens are built to protect wild animals. These centers have small enclosures and are open to visitors. The revenue collected is used for the up-keep of the animals. Zoos also serve the purpose of educating the young generation on the creatures of the wild. They are get to know the physical attributes and behavior of the animals. Some zoos specialize in certain species and are hugely in demand for that particular species. However, the beneficiary effect of zoos has always been debated upon. The animals are not always well kept. These animals if released in the wild will probably not be able to survive as they are used to being fed and not hunting. Interaction with other members of their own species is also less (except for mating). Elephants have been known to be in discomfort as they cannot interact in a herd if they have been born in captivity. 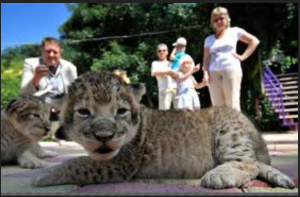 • Botanical Gardens are centers for protecting plant species from the wild. Plant species with economic importance are especially given special care. Hardwood species, aromatic and medicinal plants, plants with special adaptations, indigenous plants, etc. all fall in this category. However, certain plant species are not able to adjust to the fluctuations in the environment when left in their natural habitat. They are not resistant to temperature and humidity fluctuations when kept and maintained in glass houses. 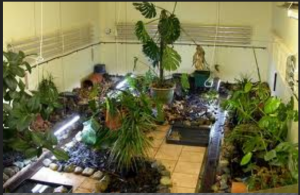 • Captive Breeding Centers like Kukrail Gharial Centre in Lucknow, Madras Croc Bank in Chennai, etc. specialize in breeding of reptiles. The round-snouted Gharials and crocodiles bred in Kukrail are mostly the Gangetic ones. Breeding centers have the upper hand when it comes to maintaining population and increasing progeny numbers but fail miserably due to in-breeding consequences. Most animals cannot survive their true habitat as they are used to the confinement of their enclosures.
Sometimes, the up-keep is poor and the animals are not looked after. The populations may increase outside the center’s capacity and that causes issues. Captive breeding no doubt is a genius effort but it has its cons as well.
Private farming of wild animals is certainly looked down upon globally. 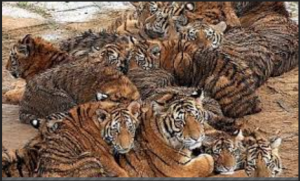 Centers that allow interaction of wild species with humans is not only distorting that individual animal’s behavioral patterns but is also breaking the etiological traits of the progeny as well.
A tiger in a Tibetan monastery or a Thai zoo that fondly nuzzles humans is not a true representative of the tiger populace that preys on other animals in the wild. 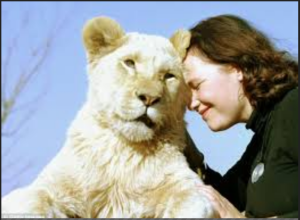 Thus, we see that captive breeding is a viable option for conserving species on the verge of extinction as it promises population maintenance and increment. However, it is not a good idea in the long run as it tampers with evolution, etiology and natural selection, especially of animal species.