Till date, we have heard of innumerable conflicts over water exploited by two countries, two states, two districts and by two villages, but here we get to know about environment degradation by two varied economic activities. As envisaged by environmentalists the third world war would be unveiled by water. However, a hundred years ago there […]

Till date, we have heard of innumerable conflicts over water exploited by two countries, two states, two districts and by two villages, but here we get to know about environment degradation by two varied economic activities. As envisaged by environmentalists the third world war would be unveiled by water. However, a hundred years ago there probably weren’t many who imagined a term like “water wars” could survive in a country that experiences annual monsoons.
Regrettably, here’s another water war between the two economic activities rising with great pace, Indian agriculture and the popular Coca Cola Industry (more popularly known as Coke). Documentaries reveal the unethical use of water in drought prone areas by the Coca Cola plant for instance in Kala Dera. Kala Dera is located in the exterior parts of Jaipur, the capital of arid Rajasthan state.
As India witnessed severe drought in 2009, reported to be the worst in four decades, a dispute between the Coca Cola bottling plant and farmers in Kala Dera sharpened. 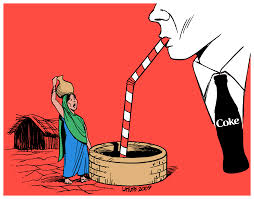 In March 2004 another Coca Cola plant was shut in Kerala by the local officials influenced by activists and farmers. The $16 million plant was blamed for degrading both the quantity and quality of water available to the local farmers. They were accused of dipping the level of local groundwater by pumping water from local wells and aquifers which led to farmers digging deeper and deeper in search of water. This lowered both, their mechanical power and patience. Farmers in Kerala protested violently since the Coke plant brought them nothing, but misery and sufferings. And they finally put an end to their desolation.
Documentaries reported for every litre of coke some 3 litres of water was needed! Yes those 3 litres which could make a thirsty half dead person regain his soul, those 3 litres which could make a woman’s skin pimple-free and all clear, those 3 litres which could help a farmer yield crops for the market through which he earns for his family, those three litres which could help a bird consume water in those miserably hot days of loo.
“Coca Cola: Good till the last drop”
How rightly did the marketing team suppose while giving the company a slogan like this. How literal its meaning is to the farmers in India. Good, till the last drop of water!
“Drinking Coke is like drinking farmer’s blood in India,” said UP protest organizer Nandlal Master. 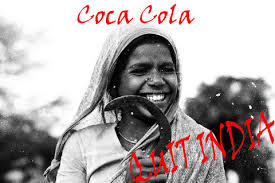 Though agriculture is a necessity, coke is a luxury. Where agriculture uses water to cater to the common man, coke only caters to its limited well-to-do customers.
But on the counterpart, the renowned company simply refuses of it being accused of sucking India’s water resources or sucking the primary livelihood of Indian farmers. Kamlesh Sharma, Coca-Cola senior manager for public affairs and communications declared that the bottling plant uses less than one percent of Kala Dera’s accessible water and they consistently focus and plan to reduce and recycle water use for their operations. Moreover they have even launched a recharge project to replenish groundwater within and outside its 56 plants in India. They even make efforts of regulating their groundwater usage and make sure of supplying water to farmers and nearby villages with the help of water tankers going round every morning.
“In Kala Dera, we have created the potential to recharge 15 times more water into the ground than we use in our plant. Even with less than normal rainfall, these structures can recharge substantially more water than is drawn for our bottling operations.’’, exclaims Mr. Sharma.
When the Coca Cola officials are questioned about what led to setting up the bottling plant in arid and drought prone areas, they said the company simply moved its hand forward towards a governmental plan of Kala Dera’s industrial development from a backward rural area totally dependent on agriculture into a modern, industrial hub.
The Coca Cola Company held itself to be rather beneficial for the drought prone area since according to the government records of water table decline, the water table decline was 1.83 metres in Kala Dera and when compared with those of other villages, this was found to be quite low since it was 2.39 m in Chomu, 2.28 m in Jaipur and 2.43 m in Tigariya. Coca cola holds itself responsible for this change, this result. It claims it to be the result of “water stewardship’’ by a responsible company with expertise in water management. 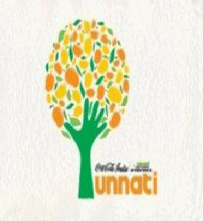 Coca Cola representatives object the unfair accusing of the company for water depletion in Kala Dera when agriculture is widely practiced and henceforth is the largest user of water resources in the area.
Coca Cola is also ready to provide training and help make the transition.
It is also being remarked that climate change is also an element playing its monstrous role in this situation of drought and low annual rainfall, thus leading to the lowering of the groundwater.
Water shortages are commonplace in India already, and numerous studies point towards an even more difficult water situation with climate change, inefficient farming practices, as well as rampant industrial pollution and extraction.
Thus, this is yet another example of a water war between the two primary economic activities which blame each other for gulping up the water resources, where both can judiciously use, recycle, reuse, reduce and move hand in hand for total economic growth and nation’s development.