Often called rainforests of the sea’, coral reefs form some of the most diverse ecosystems on the Earth. Coral are colonies of tiny animals called polyp found in marine waters that contain few nutrients. They belong to the group cnidaria ( ‘c’ is silent). Other cnidarians include hydras, jellyfish and sea anemones. Corals are sessile animals, meaning […]

Often called rainforests of the sea’, coral reefs form some of the most diverse ecosystems on the Earth. Coral are colonies of tiny animals called polyp found in marine waters that contain few nutrients. They belong to the group cnidaria ( ‘c’ is silent). Other cnidarians include hydras, jellyfish and sea anemones. Corals are sessile animals, meaning they are not mobile but stay fixed in one place. They feed by reaching out with tentacles to catch prey such as small fish and planktons. Corals live in colonies consisting of many individuals, each of which is called polyp. Coral reefs are the most diverse and beautiful of all marine habitats. Coral reefs are underwater structures made from calcium carbonate secreted by corals. Reefs grow best in warm, shallow, clear, sunny and agitated waters.

Coral reefs cover an area of about 280,000  km2 and supports thousand of species. The World Meteorological Department says that the tropical coral reefs yield more than US$ 30 billion in goods and services such as food, tourism and coastline protection. Coral reefs benefit the environment and people in many ways. Man has had a long association with reefs. They are important fishery and nursery areas, and more recently have proved to be very important economically as tourist attractions. Reefs provide protection from erosion to coastlines and sand for beaches. 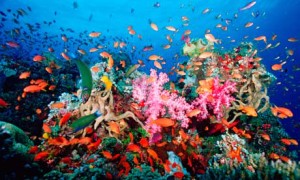 The beauty of these coral reefs has been mesmerizing the marine lovers.

But unfortumately, with the rising pollution and the risks to environment, the status of coral reefs has been degrading. There is a great threat to coral reefs. 20% of the world’s coral reefs have been effectively destroyed and show no immediate prospects of recovery. The report predicts that 24% of the world’s reefs are under imminent risk of collapse through human pressures and a further 26% are under a longer term threat of collapse. Ocean acidification, pollution, excess nutrients from run-off, high UV radiation levels, exposure at extremely low tides are some of the reasons for the extinction of coral reefs. There are two types of stresses associated with reef systems: natural and human-induced. The effects of these stresses can range from negligible to hazardous. Reefs display a surprising adaptation to short-term natural events, such as hurricanes, and usually recover to normal structure. These natural events can even be considered beneficial in regards to biological diversity. The damaged area of the reef is often recolonized by a greater diversity of organisms than existed before the storm. In the long term this event benefits the ecological integrity of the reef.

However, reefs are not well adapted to survive the unpleasent human induced environment. Some examples include agricultural and industrial runoff, increased sedimentation from land clearing, human sewage and toxic discharges. Agricultural activities can introduce herbicides, pesticides, fertilizers and runoff from animal feed lots. Sewage discharges can introduce nitrogen and phosphate compounds along with pathogens and mixtures of toxics. Uncontrolled land clearing can result in erosion, with the resultant increase in sediment loads to surface waters. Roadways, parking lots and buildings consist of impenetrable surfaces. These surfaces carry with them waters mixtures of dissolved substances to discharge into a near coastal area. These waters can then impact coral communities associated with these discharge points. Thus, activities occurring in distant locations have impacts to reefs which are far away from these activities.

There have been increasing efforts to establish better management and conservation measures to protect the diversity of these biologically rich areas. It is recognized that the main way to address coral reef problems is to reduce greenhouse gas emissions and tackle climate change. 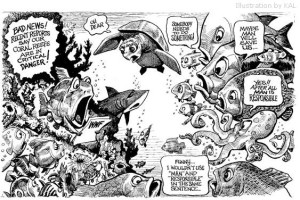 A cartoon describing the crisis and ‘responsibilities of man’.

The future is horrific. There is no hope of reefs surviving to even mid-century in any form that we now recognize. If they go, they will take with them about one-third of the world’s marine biodiversity. Then there is a domino effect, as reefs fail so will other ecosystems. This is why coral reefs are of utmost importance for the existence of biodiversity. Otherwise, if not protected, most life, especially tropical marine life, goes extinct.