To pee or not to pee, that is the question. Whether ‘suffer the pains and discomfort of a full bladder or to choose a public place in which to expel, thus displaying one’s genitalia for all to see. On a casual day, travelling around the streets and roads of India, our eyes cross the unhealthy […]

To pee or not to pee, that is the question. Whether ‘suffer the pains and discomfort of a full bladder or to choose a public place in which to expel, thus displaying one’s genitalia for all to see. On a casual day, travelling around the streets and roads of India, our eyes cross the unhealthy activity of a man facing his head towards the wall trying to release himself of the biggest pressure ever to control. Yes, this post is talking about peeing!

The men in India are none too shy to unzip their trousers, pulling out their ding-dong and then shooting a straight stream of urine into the nearest gutter or patch of grass or the wall of the public hospital. We see it all the time: taxi drivers standing beside their unsafely parked cars, as well as nicely suited men next to their gleaming BMWs, with their back to the road. No matter how disgusting you feel after having such a disastrous look, they add it more to this by smiling to you as nothing has happenned. That smile makes you feel ashamed for looking at him.This might seem overstated but this is the gross reality, my friends. 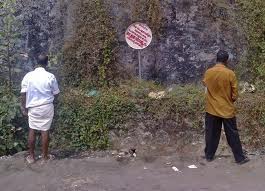 Such scenes are very common in India, creating shame and filth at the same time.

They say, the people in the government, that there is a fine for it, for peeing on the wall. They are correct, it is fine for them. But it will not be rare to find a police man commiting the same offence. I am not sure if the men involved in such activities find it amusing to look at women, smile and pee showing off their private parts as if it gives them a mental pleasure. Awful it is.

This business of peeing in public has become a huge problem for our society. Not only it is the question of one’s ethics, but also poses a danger to the sanitation of the environment. While the Government’s sanitation and toilets initiative is on a roll since years, the agenda ever since has been to create some toilets but not behavioral change. Implementation of any such programme is aimed towards bringing a change in the behaviour of the people, thus trying to change the habits.

In this situation, it can be agreed upon that the root problem in the country is the age-old practice of defecating and peeing outside in open. Women and men, in villages, both have done it! Having its roots in villages, there are many houses in villages which do not have toilets. This same attitude transfers to the cities, along with the rural migrants.

And while the government works towards building more toilets in every household street in India, targeting the psychology is very important for creating socially acceptable behavior in this regard. There are two problems: lack of public toilets in India and lack of an attitude towards not peeing in public. As we all tend to blame the governmental authorities for the first, the public is to be blamed for the latter. No matter what it does to you or how uncontrollable it you are not entitled to do it in open.

Also, urinating in public places leave stains of yellow colour with untolerable smell. Thereby, making the environment filthy and dirty. Living in such unhygienic conditions promotes the spreading of life-taking diseases like dengue, malaria, cholera etc. These places attract flies and mosquitoes, which then act as a carrier of such diseases.

Each year nearly 20 million people are starting to use a toilet – breaking the inter-generational habit that was taught to them as toddlers. Some NGOs and companies are also responsible for this number. Sulabh Shauchalayas have opened many public toilets, although these are paid toilets. But the good thing is that this initiative is providing services to many people, which earlier were provided by the walls of any random building. There are other NGOs which have taken the initiative of building toilets in villages and spread awareness among the people about why they should use the toilets. 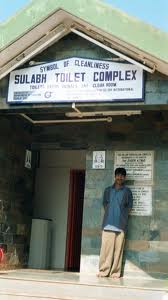 More and more toilet complexes should be opened in order to remove the bad habit.

Do we really want to live in such conditions? Of course not! It’s also important that government should keep a check on the people who facate on public walls. Other than economic reforms, public hygiene should also be an area of concern for the benefits of the people. It’s high time now that we should leave this age-old practice of peeing in the open and be the responsible citizens of our country.