The Dangers of Rising Sea Levels

Global warming has really had a massive impact on our environment and ecosystem, and it is increasing day by day. The phenomenon of global warming is usually caused due to emission of green house gases in the atmosphere. Green house gases include carbon dioxide, methane, nitrous oxide, water vapour and the deadly chlorofluorocarbons (CFC’s). The […]

Global warming has really had a massive impact on our environment and ecosystem, and it is increasing day by day. The phenomenon of global warming is usually caused due to emission of green house gases in the atmosphere. Green house gases include carbon dioxide, methane, nitrous oxide, water vapour and the deadly chlorofluorocarbons (CFC’s). The more human beings are releasing green house gases in the atmosphere, the warmer this earth is getting. The average temperature has really gone up in the last few decades due to the heat-trapping abilities of these gases. Emission from industries, factories, nuclear testing, automobiles and air conditioners has together contributed to global warming.

The impact of global warming has been devastating and far reaching. One of the most significant impacts this has brought upon is the rising sea level of water bodies. Sea level has always been fluctuating since the creation of earth- the ice ages being the proof of that. But this new form of rising sea level is unnatural and something to make us worry about. It has been estimated that there occurs a rise of 3mm every year across the world. In the past twenty five years, there has been about one to two inches of sea level rise in the globe. It is expected that there would be an average ten inches rise in sea level by the year 2025. These statistics are shocking. This is a danger call for humans worldwide, especially those who live in coastal areas or near the sea. 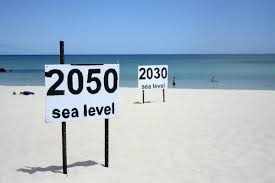 What has happened is that because of global temperature rising up, glaciers have started to melt. These glacial waters are the main reasons for the sea level rise. When the temperature gets higher, water starts to expand. Each and every droplet expands a little- as a result the ocean mass increases. This is an ongoing occurrence which has been happening for some time now.

It is more alarming because a large area of human population has settled near the sea because of the pleasant weather and attractive marine life. The main threats that rising water level poses to the human population are as follows-

No matter how much we become aware of the rising sea levels, there is little or nothing we can do to fight it. Sea level rise is inevitable and is expected to increase every year. Gradually all coastal areas would have to be evacuated if this keeps on happening. Other than leaving and evacuating, there is no other choice left. The ocean is something that we cannot fight with. It can consume the entire earth in minutes. The only solution left to us is if we try and reduce the green house gas emissions in the atmosphere. The complete prevention of green house gas emissions will never be possible so long as man doesn’t change his ways. But if the pollution can be reduced, the global warming can be slowed, if not completely stopped. If global warming slows down, so will the melting of glaciers. Sea level will rise gradually, but its pace can be slowed down to some extent. This is easier said than done. It will require a lot of dedication and sacrifice on our part. This is a difficult path that we must take for the sake of our existence. Try and lead a better lifestyle and stop emitting carbon in the atmosphere. Start reducing your carbon footprint today.