For 200 years we have been conquering nature.Now we are breathing it to death.The global environment crisis are real as rain,and we cannot stand the thought of leaving our children with a degraded earth and a diminished future.Its time go green and lower the emissions,its time to go for new environment friendly ways,its time to go […]

For 200 years we have been conquering nature.Now we are breathing it to death.The global environment crisis are real as rain,and we cannot stand the thought of leaving our children with a degraded earth and a diminished future.Its time go green and lower the emissions,its time to go for new environment friendly ways,its time to go for e-rickshaws.

“Innovation is hard.It really is.Because most people don’t get it.Remember, the automobile, the airplane, the telephone, these were all considered toys at their introduction because they had no constituency.They were too new.” -Nolan Bushnell

Auto rickshaws cause a lot of pollution while cycle rickshaw use a lot of man power by pedaling. Then came the era of e-rickshaws which are Eco-friendly and save the man power too. 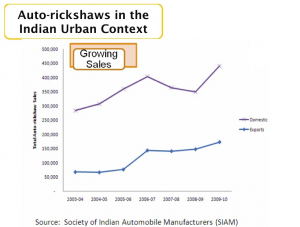 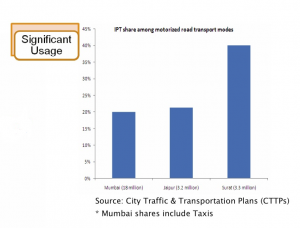 They are light weighted rickshaws which run with a maximum speed of 25 km per hour and carry total weight up to 400 kgs. It is easy to drive and has a hand break or a foot break. It has a powerful motor of around 850 watts, a battery of 48V and a mileage of about 80-100 km/charge.

Automobiles have given us a life of great comfort but the major problem with them today is well known by all i.e. the pollution caused by them. Major vehicles operate on petrol or diesel which causes pollution level to rise due to combustion of fuel. The major advantage of e-rickshaws is that it requires no fuel. It is operated using rechargeable batteries, thus having long life and less pollution. No fuel implies savings. Approximately one-third of the greenhouse gas emissions come from vehicles and two-third of it comes from personal vehicles. 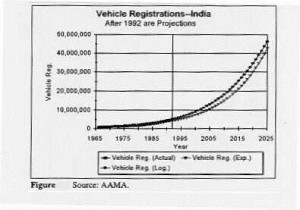 Air pollution is an increasing health hazard today. Among the various sources of pollution, transport sector is the major contributor with a direct correlation to increasing particulate matter pollution.

E- Rickshaws are not only helpful in cutting the air pollution but also help in reducing noise pollution. E- Rickshaws are very silent and smooth and do not produce loud noise like the auto rickshaws.

Data collected reveals auto-rickshaws run only at 15-20 km/hr speed thus producing greater pollution as they are designed to run efficiently at 40-45 km/hr. The pollution is further increased because of the fact that they continuously have to run in stop/start mode. The data also shows that on an average these auto-rickshaws travel about 50-60 km. during a day. According to this data it was felt that an electric rickshaw designed to run 60-80 km per charge at speeds of between 25-40 km/hr would be an excellent substitute for these auto-rickshaws. In a country like India, a quiet and Eco-friendly electric rickshaw with the above attributes could be a boon.

With vehicles comes the safety issue. These rickshaws are less risky than fuel operating vehicles. They can help more in the event of an accident because they are slower and lighter than auto- rickshaw (but faster than cycle rickshaw) and also there is a chance of explosion of a vehicle if operating on gas or petrol.

These battery-powered rickshaws cost lower as compared to the other vehicles. Government gives subsidy over buying these e-rickshaws. Moreover the cost of petrol and diesel is touching new heights day by day. E- Rickshaws can be easily recharged from home or from any outlet of proper voltage. Recharging batteries is very cost effective. Thus clearly benefits savings in running cost and making the investment quite profitable.

Since they use electricity, they do not require oil to lubricate the engine. Thus oil changing was a cumbersome procedure of past. Autos have an engine and a gear box which is burdensome. E-rickshaws don’t have this problem. The motor is much smaller and the battery is below it, thus maintaining them is easier as there are less moving parts.

Auto rickshaws are used in almost every city in India and many other countries. E-rickshaws will be highly successful if they completely replace the auto rickshaws because they are not only user friendly, but also have many other advantages. If someone is against them then definitely he just doesn’t believe in climate change or he must be in wrong belief that oil will last forever. E- Sustainability is about ecology,economy and equity and E- Rickshaws are the future sustainable public transport.