How many times have we known of incidents where there have been accidents on the road, not because of faulty driving on the driver’s part but for circumstances that were beyond our control? For one, there is the absence of streetlights. Not only is this an automotive hazard but it is also one of the […]

How many times have we known of incidents where there have been accidents on the road, not because of faulty driving on the driver’s part but for circumstances that were beyond our control? For one, there is the absence of streetlights. Not only is this an automotive hazard but it is also one of the largest causes of concerns for pedestrians walking to someplace all alone in the dark. We all know just how safe that feels. The next trouble in line is the running out of gas. This seems to be gaining significance with every passing day, what with the exorbitant fuel prices, and the gas guzzling vehicles that we seem to love driving. Stray animals are yet another issue that needs attention, especially when it comes to night driving. Now, how would you react, if one were to tell you, that this and several other problems can be solved with a virtually lifetime solution, and not just your lifetime, but also that of your progeny? 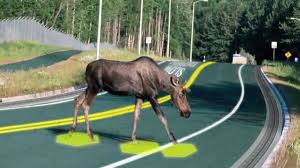 Solar roadway is fairly new concept that is being explored in extremely rare parts of the world. It is seeping immense rewards to those who have been able to experience it, and is successfully leaving those in awe who have only had a second hand experience of the same. As the name suggests, this concept deals with using solar energy to make our life just so much better by employing it in the development of roads, and not just additions and a few alterations, but right from scratch, that is, including the physical construction of these roads. Yes, you read that right. Well, of course there are certain technical elements that could be out of our grasp right now, but the benefits that come to the forefront just by the thought of its success are large enough to make it a viable possibility.

Solar energy as we already know, is the most abundantly available, most widely harnessed source of alternate energy. Alternate energy is increasingly becoming a necessary lifeline if we intend to flourish and survive. What makes solar energy almost perfect is that the radiations of the sun are extremely strong and are capable of providing us with sufficient energy. Add to it, the fact that the sun is one resource that doesn’t seem like it is going anywhere for many a thousand of years or so. So it is certain that it will last, way beyond we do. Unlike other resources such as water, solar energy reaches almost all parts of the world except a certain few. Luckily, the regions with the highest concentration of roads also have the highest exposure to the sun. 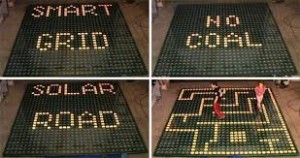 Solar roadways work on the principle of solar cells. We are familiar with their use in other solar equipments such as solar water heaters and solar cookers. These solar cells practically replace the all too familiar tar or concrete roads. Now, one would wonder if they will be able to bear the wear-and-tear that our roads are used to. These cells are coated with a certain layer that takes care of this issue, and is good enough to allow roller trucks to pass over without any subsequent damage. These cells have an underground system of networks and cables to ensure their workability and maintenance.

These solar cells can have LED lights embedded into them. This is a brilliant mechanism to light up dark and dingy roads without the use of streetlights. These lights can be so designed that if required, these panels can be used as alternative surfaces in playground, sports courts or even in parking bays, where the lights light up according to the rules and lines of the activity. The lights can replace road dividers to segregate lanes, or to display zebra crossings, stop signs on the road, and many more. What is especially interesting is that these panels can be made motion/touch sensitive, such that they automatically light up when there is a pedestrian or a stray animal or any other vehicle on the road, to warn in you in advance. This will be a great way to reduce the possibility of road accidents to a great extent. In regions prone to heavy snowfall, one would no more need to spend hours of time and tons of efforts in shoveling away the snow. There will be no bumps and unnecessary holes and pits on the road that make driving an uncomfortable harrowing experience. There is also the viable possibility that your cars won’t need to be fuel-run, as these cells can provide with enough energy to aid your electric cars. Just imagine no more fuel bills.

Your otherwise boring mundane driving experience will be turned into an enjoyable fun ride. It will almost be like driving through a disco, every time, everywhere. Since most of our roads are almost steaming hot due to the sun, this is an incredible way to utilize this source of energy. The immense amount of money that the authorities will save just by investing in solar roadways, by means of savings through reduced maintenance costs, no requirement of streetlights, etc can be effectively utilized to focus on other critical issues of development.