Being a vegetarian will help prevent animal cruelty for obvious reasons but are you aware of the environmental consequences of a meat-eating diet? If not, then you should be aware of the startling fact that meat-eating is considered to be the second-biggest environmental hazard facing the Earth! The production of meat consumes large amounts of […]

Being a vegetarian will help prevent animal cruelty for obvious reasons but are you aware of the environmental consequences of a meat-eating diet? If not, then you should be aware of the startling fact that meat-eating is considered to be the second-biggest environmental hazard facing the Earth! The production of meat consumes large amounts of natural resources such as water, fossil fuels and topsoil and at the same time pollutes other resources such as water and air. Our meat consumption habits has taken a serious toll on the environment. The whole process of production and distribution of meat requires inputs of pesticides, energy, and water on a large scale. This in turn releases greenhouse gases and a broad range of toxic chemicals into the atmosphere and water. Read on to know more about their impacts:

Watering the feed that animals eat, providing drinking water for these animals, cleaning away the filth in farms, transport trucks, and slaughterhouses, the farmed animal industry puts a serious strain on our water supply. Most of the water supply is used to irrigate the grains required to feed the animals. It takes more than 10,000 litres of water to produce 500 grams of meat, while growing 500 grams of wheat only requires 100 litres! This means that you save more water by not eating 500 grams of meat than you do by not showering for six months! There are more than 17 billion livestock in the world which is nearly triple the number of people alive. Now you can well imagine the amount of water required to cater to this demand of meat consuming population.

Topsoil is another important natural resource which is being used at a faster rate than the pace with which the nature is able to replace it. The production of corn and soy bean, the major grains fed to livestock, causes massive soil erosion because these crops are grown in rows. The bare patches present between the rows of the cultivation exposes the topsoil to both wind and rain erosion. In this way, raising livestock has taken a serious toll on fossil fuels and the topsoil resource. Rainforest Another natural resource that is very much threatened by the increased production of livestock are the rainforests. According to Greenpeace, in the 2004-2005 crop season, all the animals and trees in more than 2.9 million acres of the Amazon rain forest in Brazil were destroyed in order to grow crops that was used to feed the livestock.

All of the livestock being raised throughout the world produce enormous amounts of manure and urine, which in turn pollute natural resources. The modern animal farming practice is to raise livestock in factory farms where thousands or tens of thousands of animals are crowded into small spaces. The main reason which can be attributed to this practice is to keep the operation costs of the farms low. However, this makes the animal waste problem worse because animal waste changes the pH of our water, contaminates our air and the gases emitted are a potent cause of global warming. Also, the process of growing livestock feed generates copious amounts of nitrous oxide, a greenhouse gas 300 times more potent than carbon dioxide. This leads us to understand that meat consumption is also a very important reason for global warming!

The waste from factory farms gives off many harmful gases such as ammonia, methane and hydrogen sulphide, as well as clouds of dust particles and particulate matter, which pollutes the air we breathe. This ammonia can react with other gases in the air and cause respiratory problems. They also contribute to smog and acid rain. Methane is the most potent gas given off from livestock. In fact, the meat industry is the number one source of methane throughout the world, releasing over 100 million tons a year. We can state theoretically that by reducing the amount of meat eaten throughout the world we could slow down methane production and therefore save us from the wrath of global warming. 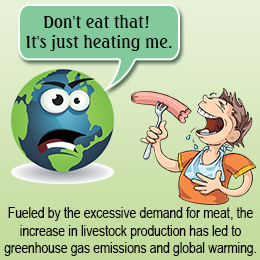 To reduce the environmental impacts of livestock production, we need strong formulation and implementation of better policies and regulations. This law abiding process will surely take time. We just cannot afford to sit back and watch our environment go to waste. Hence, we need to take some steps on a personal level. The best solution can be to change our diets from meat consuming to a vegetarian diet. Switching to a plant-based diet from a meat-eating diet can help us reduce the detrimental effects on the environment. At the same time, for those who cannot give up meat completely, try cutting down on meat consumption. Another way can be to choose meat and dairy products from organic, pasture-raised, grass-fed animals.

It may seem very strange that by simply consuming meat we are putting our dear planet in grave danger. And that is precisely why one needs to understand that “If you want to make the environment green, then go green!” 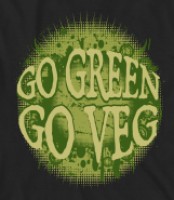