You are here: Home \ Environment \ ENVIRONMENTAL IMPACTS OF MINING
Environment
0

Mining, as we know, is the extraction of minerals and ores from the Earth. It is a vital sector of our economy, just next to agriculture. Mining helps us to extract costly resources from the Earth, which we fashion into countless goods of our daily and industrial uses. Mining provides us fuels for our energy […]

Mining, as we know, is the extraction of minerals and ores from the Earth. It is a vital sector of our economy, just next to agriculture. Mining helps us to extract costly resources from the Earth, which we fashion into countless goods of our daily and industrial uses. Mining provides us fuels for our energy requirements, metals for making machines and engines, the ores for making chemicals and fertilizers, the clay for making crockery, the rocks and stones for our buildings and dams, the gold, diamond and other precious stones for our jewelry making, and what not. Mining is, therefore, considered as an important industry, and it is necessary for any nation to ensure that this industry continues to flourish and develop. The total number of mines, strictly speaking open cast mines, in our country is around 5600; out of which, about 500 mines are producing coal, and the remaining are in the non-coal sector.

In general, mining activities are accompanied by a variety of environmental problems. The process of environmental degradation, which starts with the extraction of minerals resulting in land degradation and addition of pollutants in the air and water, continues even as the extracted mineral ores are further processed and developed for their ultimate uses.

The environmental impacts of mining can be broadly divided into four parts,

Mining causes water pollution in two ways. Firstly, mining causes discharge of acid-mine-waters into surface water bodies like ponds, rivers, etc. to the water bodies.
Mining is also responsible for changing the hydrology of an area in many ways. Say for example, sometimes, mining may change the river course and discharge, thereby affecting the agriculture and flora and fauna of the area. Similarly, sometimes, mining activities may lower the water-table of the area. 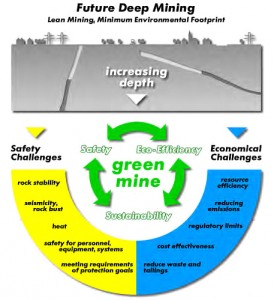 Mining causes air pollution in two ways. Firstly, it adds gaseous pollutants to the air; and secondly, it emits and adds dust particulates to the atmosphere.
The harmful gaseous pollutants, like sulphur dioxide, oxides of nitrogen, carbon monoxide, etc. are originated in mining activities from the waste dumps ; whereas, the dust particulates are produced during ore/coal handling, blasting, and transportation.
Mine fires, which are largely associated with the underground mining and also in solid waste disposals, also do pollute the atmosphere on a large scale through smokes, etc. Such pollution has been caused on a large scale near Jharia in Bihar State of our country. 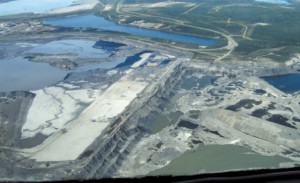 The land degradation effects of mining can be divided into three parts:
Land Subsidence – Due to underground mining, the land surface subsides, which not only causes damage to buildings and surface drains; but also, sometimes, damages and highways, bridges, water and sewage lines, etc. existing on the ground.
The incidents and threats of land subsidence have mainly been reported from areas of coal-mining; and to a lesser extent, from the areas where salt and gypsum have been mined on a large scale. There have been a few reports of subsidence arising from the extraction of limestone and other minerals. In recent times, land subsidence incidents have also been reported in some areas, which have been subjected to excessive mining of oil and natural gas.

Land Degradation – Open cast mining removes the top soils and causes deep and large excavations, pits and cuts. As such, large areas become unusable and denude of vegetation, causing continuous soil erosion and its ill effects like silting and degradation of streams and water bodies. Additionally and most importantly, the waste dumps, created by the open cast as well as underground mining could lead to erosion and slips (landslides), if not attended and treated timely and properly. Such landslides and flowing debris may sometimes cause serious damage to life and property, and may sometimes result in disasters or virtual disasters.

Large scale felling of trees from the forest areas, May sometimes have to be adopted for extraction of valuable mineral deposits from those areas.
The thick tree cover to be felled in such operations may either be found directly on the area to be mined or it may have to be destroyed for making inroads in the mining area. Several mining areas, such as near Mussorie, are getting bereft of thick forests, posing tremendous environmental problems.
Large scale deforestation, besides causing oxygen deficiency, drastically changes the climate conditions, like rainfall, temperature, humidity, etc. of the area ; which may result in large scale deaths of wild animals and birds living in the forest, causing imbalance to the natural ecology of the area.

The large scale noise caused by mining operations, and the vibrations induced into the ground, have been established to be a major environmental hazard, as it interferes with the hearing and loss. It not only damages the ears, but may even cause headache and high blood pressure. Heavy ground vibrations, introduced by heavy blasting of areas, may also damage the nearby structures, buildings etc. ; besides causing irritation to the residents.

Besides the above direct environmental impacts, mining operations may also cause adverse social and visual effects.