LAKES AND OCEANS: THEIR LIFE ZONES

In this article, I will turn your attention to aquatic organisms, i.e., living organisms inhabiting the variety of water bodies on the earth. We shall specifically take up the examples of lakes and oceans. Different regions of lakes and oceans have different characteristics which are a function of many abiotic factors. These regions, which are […]

In this article, I will turn your attention to aquatic organisms, i.e., living organisms inhabiting the variety of water bodies on the earth. We shall specifically take up the examples of lakes and oceans. Different regions of lakes and oceans have different characteristics which are a function of many abiotic factors. These regions, which are identified as life zones, have different communities of plants and animals. The terminology of distribution of life zones of lakes and oceans is similar to each other. Ecological classifications of aquatic organisms gives us a clear picture of how organisms within an ecosystem can be categorized, based on their life styles, such as where they live and how they move and so on. 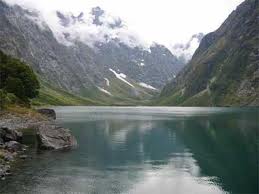 One of the main requirement of fresh water organisms in the water column without sinking. The other requirement is to obtain oxygen from the environment in which they live. To fulfil these requirements, different fresh water animals have developed different adaptations. The physical environmental conditions as well as life in different zones of the ocean differ markedly from one another. The commodities of each zone exhibit adaptations to numerous aspects of their physical environment for their survival. The adaptations exhibited by the communities of one zone are different from those of another depending on the environmental conditions.

All living organisms exhibit varying capabilities due to both ecological and evolutionary adaptations to changing conditions. The marine organisms exhibit adaptations to overcome salinity and temperature fluctuations. Although it constitutes the smallest area of all in the world’s oceans, the intertidal zone is well known. It is an extremely narrow fringe area of a few metres in extent between the high and low water levels. Because it is the most accessible to humans it has been studied more intensively than any other marine habitat.

Despite the varied characteristics of lakes and oceans and the variety of plants and animals inhabiting them, they have one feature in common: they all are basins filled with water. We can, therefore, treat them all in the same way by subdividing the whole watery habitat available to aquatic plants and animals into several regions, whose features however may not be similar. These regions are called LIFE ZONES. Three different life zones have been identified based on the abiotic environmental variables and they are named as:

The littoral zone is the shallow region of a water body, where water meets land. It has the greatest diversity in the lake. A high diversity of plants is present in this zone. This zone is divided into three sub zones based on the position and distribution of the plants here, which are, a) Zone of emergent vegetation, b) Zone of rooted plants with floating leaves, c) Zone of submerging vegetation. The aquatic plants in the littoral zone provide shelter and places for attachment for great variety of animals which are as diverse as the plants. The microscopic animals called zooplankton of the littoral zone include many of the forms found in the lighted zone known as the limnetic zone, as well as some that are not limited to the limnetic zone. The most striking increase in animal life in the littoral zone is found in the insect community. 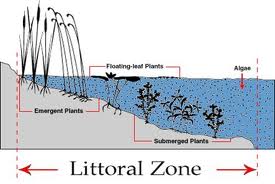 In pelagic zone or open water, it is the area where the bottom is too deep to be inhabited by rooted plants. It can be subdivided by the light compensation level into a lighted zone called the limnetic zone and the dark zone called the profundal zone. The profundal zone cannot support photosynthesis, because the effective light penetration does not take place in this region. All organisms present in this zone are chemosynthetic autotrophs or heterotrophs.

In benthic zone, i.e., the buttom region of the lake, layers are of fine mud cover. In deep lakes the dominants organisms are anaerobic bacteria. Due to their activity, hydrogen sulphide and methane may be formed as by products. 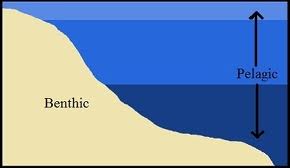 Each of the above zones in lakes offers different opportunities to the species that live in them and many organisms have evolved appropriate structures or behavioural patterns which are characteristic of that particular life zone, no matter where the lake is sited.

Oceans: The size and complexity of the oceanic or marine environment makes it a difficult system to classify conveniently. Beginning with the waters of the open ocean, subdivisions can be made both vertically and horizontally. The entire area of the water is the Pelagic zone, which can be divided into two zones as neritic zone and oceanic zone. Vertically the pelagic realm can be further subdivided into two major zones, based on the degree of light penetration. These are the photic zone and the aphotic zone.  The boundries of these zone can be subdivided into mesopelagic, bathypelagic, abyssalpelagic and hadal pelagic zones. The boundries of these zones are defined on the basis of physical characteristics such as water temperature, water depth and available light. 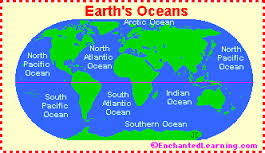