You are here: Home \ Environment \ Eutrophication- The nature replies!
Environment
0

Eutrophicationis a scientific term which refers to the way ecosystem responds to natural or artificial addition of nutrients to a water body. Just like all the processes of humans beings are made possible from the energy they get from food, algae grow in the sea deriving their energy needs directly from the nutrients available in […]

Eutrophicationis a scientific term which refers to the way ecosystem responds to natural or artificial addition of nutrients to a water body. Just like all the processes of humans beings are made possible from the energy they get from food, algae grow in the sea deriving their energy needs directly from the nutrients available in water – nitrates and phosphates being the most important ones. Thus, any increase in the nutrients inside a water body leads to a corresponding increase in plant and algal density. Eutrophication (or hypertrophication) can hence be defined as excessive plant and algal growth due to availability of previously deficient nutrients and carbon dioxide, which coupled with sunlight favor photosynthesis.

A controlled increase in the nutrients in an aquatic body has almost no adverse effects on the environment and is very useful for the algae and certain kinds of fish population. That is why the aquaculture scientists usually recommend the pond managers to eutrophy their ponds so as to increase the fish production. But what happens if you start eating too much? Similarly, an uncontrolled addition increases the plant and algal growth manifold thereby leading to algal bloom which can highly deteriorate the water quality.

What happens is that increase in the algal biomass makes the water unfit for drinking and other requirements. As the algae eventually die, they are gradually decomposed by bacteria. During this decomposition, oxygen is used up which leaves the water anoxic (depletion in level of oxygen). Creation of dense blooms of phyto-plankton makes the water foul-smelling and translucent thereby decreasing the sunlight reaching to the aquatic plants. This way what once helped improve the fish and plant population now proves to be catastrophic for the same.

Eutrophication is a natural process. That’s why one can see more shrubs and algae over aged water ponds. The human activities have however dramatically increased its rate, by artificially and usually unknowingly adding nitrates and phosphates through fertilizers and sewage disposal into aquatic systems, creating a threat to the water quality all over the world. Ploughing in agriculture and and industrial development, for instance, is the main source of nitrogen increment in aquatic systems.

Any source of eutrophication which can be identified with the nutrient waste traveling directly to the water is termed as a point source. That is why they can easily be regulated. However, much of the pollutants which come are hard to identify and diffuse sources. Non-point sources are therefore, owing to the difficulty in locating them, very troublesome to handle. The nitrogen transport occurring due to human intervention in watersheds is an example of non-point source.

Excessive use of fertilizers by the farmers increases the nutrient content in the soil which is, over due course of time, washed away by surface water or mixes with sewage water. Building of more and more cities decreases the land available which in turn, accelerates the land runoff. The nutrient waste which is still left over eventually mixes with the ground water. Thus, most of the nutrient waste entering the water bodies can be traced to uncontrolled use of fertilizers and insecticides used in agriculture which is harmful both to the soil and water quality. The burning of fossil fuels and ammonia volatilization adds largely to an increase in the percentage of nitrogen in the air which is later deposited into water bodies through atmospheric deposition- acid rain being the most significant factor. This is thus, the main reasons of eutrophication in industrialized areas. Stagnant water is more vulnerable to eutrophication and that is why drying of wetlands causes an even more increase in nutrient concentration.

Eutrophication is a deep concern to the supporters of sustainable development. A scientific way to control it is to breed shellfish population such as oysters and mussels which controls the phyto-plankton density, removes nitrogen from the water and filters out the suspended solid impurities. This prevents the conditions of anoxia by reducing algal blooms. 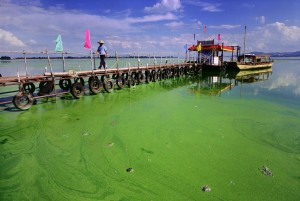 This is how the green algae grows on the surface of stagnate water bodies.

Another way to stop eutrophication is to adopt organic farming which adds way less nutrient waste to the soil as compared to the conventional fertilized farming. Recent studies have however shown that organic farming, in some cases, can have even higher eutrophication impacts. So, the scientists have developed the Soil Nitrogen Testing (N-Testing) technique which the farmers can make use of to find the optimum amount of fertilizers required by the crops. This helps them decrease their financial costs side-by-side maintaining their soil and water quality.

Another way to check the eutrophication due to non-point sources is by using Riparian buffer zones. They are simply interfaces between land and water bodies which if created near waterways can be employed to filter the pollutants. This way the sediments and nutrient waste can be stopped in-between ad prevented from reaching water bodies.

Eutrophication is thus a very serious issue which needs to be checked on early on. As the famous proverb goes on, “A stitch in a time saves nine”. If we all join our hands together we can succeed to help water regain its original quality by reversing this deteriorating cycle.