You are here: Home \ Environment \ Making it too salty- Salinization!
Environment
0

Making it too salty- Salinization!

follAlong with other minerals and nutrients, soil is rich in salt content. The salt content is collectively termed as soil salinity which is essential for the existence of various plants and other organisms to whom soil is the home. The increase in this salt content above the normal level due to any process whatsoever is […]

follAlong with other minerals and nutrients, soil is rich in salt content. The salt content is collectively termed as soil salinity which is essential for the existence of various plants and other organisms to whom soil is the home. The increase in this salt content above the normal level due to any process whatsoever is called as salinization. Over due course of time, mineral weathering due to air and water currents keeps salinizing the soil. Recent studies have shown that the human activities have largely accelerated this rate over past few decades. UNESCO soil map shows millions of hectares of land as salinized all over the world, with Africa topping the list (69.5 million hectare).

Salinization can occur due to high levels of salt coming from saline water. The water once absorbed by the soil is responsible for the salt penetration deep inside into the soil surface. Salinization caused by water is pretty much like a communicable diseases for surface runoff, water storms and movement of water tables make the salty water mobile which in turn, leads to salinization even in remote areas where the water was otherwise fresh. 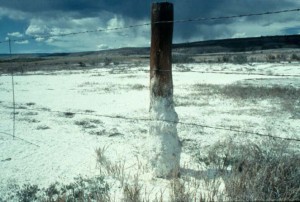 The topmost layer of the soil is covered by salt, not by humans but as a result of the activities leading to salinization.

Salt-affected soils (the soils with a very large salt content and that too relatively more at the soil surface) can also result by saline water coupled with a phenomenon of Physics called as Capillary action. What happens is that the tiny pores throughout the soil behave as capillary tubes (at least as long as the upward movement of water is considered). The salty water buried deep inside the soil in form of water-tables can find its way upwards traveling against gravity by capillary action. This results in salt accumulation over the soil surface turning it into a salt-affected soil.

Other than this, salinization can occur due to climatic change (that too is happening as a result of too much pollution that humans are pumping into the environment each day) which pushes the rate of salt accumulation even more. Particular landscape features are also responsible for movement of water tables which spreads the salt content to other areas. The fertilizers, in which Potassium has been started to be used in large amounts recently, turn into sylvite, which nevertheless being naturally occurring largely converts the soil into salt-affected soil. Activities like land clearing for building towns and cities have also been, time and again, proved to be responsible for soil salinization.

With this said, one should not get a wrong impression that salinization occurs merely due to human interference with the ecosystem. Many natural processes are responsible for adding Na+ (the sodium ion) to the soil thereby making it sodic. In Australia, for instance, salt is deposited due to a coupled effect of dust and precipitation. Mineral weathering gradually releases salts with time which once flushed and leached out by water runoff make the soil saline with time.

Salinization deteriorates the soil quality making it non-habitable for plants and insects. This makes the soil worse enough for any vegetation to occur. Sodic soils present to us an even bigger problem because they have a very unstable and ill-defined structure which prevents water infiltration and drainage. Any water occurring around saline soils itself becomes rich in salt content becoming unfit for human use. It damages the road infrastructure (as the soil now can’t hold material) and the bricks made from saline soil are also of low quality. It corrodes the cables and pipes buried inside earth and eventually leads to soil erosion once crops can’t survive the elevated salt content.

Therefore, it is very important to handle the soil salinity very carefully. Proper irrigation techniques can be used to prevent salt accumulation by using adequate fresh water which would leach out salts from the soil bringing the salt levels back to normal. The otherwise common use of salty water and disruption of drainage patterns largely increases the soil salinity. A very serious situation occurred in Egypt in 1970 when the ground water level had changed before Aswan High Dam was built. This enabled soil erosion leading to high salt content in the water table as a result of which the arable land turned saline when the construction was complete.

Along with the use of excess irrigation water, high levels of soil salinity can be handled by treatments suggested by United Nations Food and Agriculture organisation where salt-tolerant plants are grown over saline soil for most other crops would already have died. Salinity-resistant plants would use up the excess salt with time and then the normal water table control combined with tile-drainage (a form of sub-surface drainage) can again make the soil fit for vegetation. Deforestation must be stopped to save the soil in dry lands from salinzation (which occurs because clearing the forests for agriculture replaces the long roots of the trees by shallow ones initiating the capillary action of the ground water below).

The diagram shows how trees can help to remove salinity of the soil.

Many of us love to visit the beach area. The severity of the problem can easily be understood when you ask yourself what was the last time you saw any vegetation in the beach area. Well, that is because that the soil there becomes too saline for any vegetation to occur because of the excessive salt coming from the sea water. Thus, the prevention measures discussed above need to be urgently taken before the whole world turns into a beach-like area which you are definitely not going to love.