Sun has been the primitive energy source for all the natural processes occurring on earth ever since the first unicellular organisms came into being, the dinosaurs started roaming around or the very planet came into existence. Hydrogen nuclei fusing into helium ones at temperature as high as thousands of degree Celsius makes life possible 149,600,000 […]

Sun has been the primitive energy source for all the natural processes occurring on earth ever since the first unicellular organisms came into being, the dinosaurs started roaming around or the very planet came into existence. Hydrogen nuclei fusing into helium ones at temperature as high as thousands of degree Celsius makes life possible 149,600,000 kilometers away by letting the plants photosynthesize and running the water cycle.

Unconscious about this perfect setup of nature, most of the human beings living on the planet continue to pollute the environment causing an alteration in the net heat and light received by earth thereby resulting in a temperature change on the planet. Global warming, which leads to an increase in earth’s temperature, is well known to many and has gained attention of the scientists and environmentalists. Global dimming, on the other hand, which causes a decrease in earth’s temperature, remained unknown even to the scientists working in this particular field until a series of systematic measurements started in 1950s estimated a 4% reduction over the three decades from 1960–1990.

Global Dimming poses a direct threat to the existence of life on the planet.

Burning of fossil fuels, along with producing greenhouse gases is responsible for global warming, produces pollutants such as sulphur dioxide and soot as by-products. These particulates, after rising up, change the properties of the clouds (which are formed as a result of water droplets coalescing by air-borne particles). Due to the pollutants, the clouds now have smaller droplets thereby same amount of water being held by more number of droplets which highly increases the amount of sunlight reflected back due to the increased surface area. This is known as Global Dimming.

Pan evaporation data (a measurement which combines the effects of various climate elements such as temperature, wind, solar radiation humidity etc.) showed in the 1990s a fall in the rate of evaporation contrary to what was accepted due to global warming. China, although showing no signs of any increment in clouds and precipitation, showed a similar trend providing evidence that aerosols may be one of the very important factors responsible for global dimming.

Owing to the exactly opposite consequences of global warming and global dimming, one may be tempted to think that any increase in the temperature due to the former will be diminished by the counter-decrease in latter which would thus make the burning of fossil fuels harmless to the environment. One should here, however, not forget the harmful effects of the pollutants produced including skin and respiratory diseases, acid rain and smog. As if this was not enough, global dimming itself has devastating effects – the monsoon failure in Africa during 1970s and the 70s and 80s drought in Sahel to take for instance.

Although not universally accepted, following on the lines that the water cycle gets it energy from the sun, climatologists believe that the pollution cooling of the Northern hemisphere, has forbidden the rain belt to rise to the northern latitudes and thus, cutting off rainfall from the Sahel in Northern Africa,

Scientists have predicted a 5 degrees centigrade increase in earth’s temperature by the end of the century.. If we just start to stop global dimming right-away by clearing emissions we would be doing an irreparable damage to ourselves for that would increase the rate of global warming manifold. This would push the estimated temperature increment to 10 centigrade which would mean that we have put ourselves to a dead-end.

Thus, global dimming needs to be handled very carefully for it is deeply intertwined with global warming. In many of the developed countries, especially Europe, the government has made strict measure to check the pollutants causing global dimming which unfortunately lead to a heat wave in Europe killing thousands of people in France a decade earlier. Global dimming has the potential to affect the monsoon in Asia, which can affect the lives of around 3 billion people.

Global dimming is a new issue, as compared to global warming, that has struck the environmentalists. We have not yet succeeded to discover as to what causes it, much less find out how to stop it. For instance, any step taken by the government (mostly of developed countries) have proved futile and only worsened the situation. Extensive research is going in various parts of the world and climatologists are trying hard to stop us from reaching a dead end. 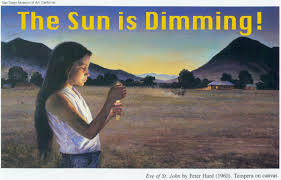 No one knows what will be the consequences, when our activities will halt the solar energy from reaching earth.

If we want to save our vegetation, stop soil-erosion, acid-rain, changes in rainfall-patterns and famines, it is high time that we attack the global dimming and global warming simultaneously and on the very ground level or, warn the climatologists, the whole world might, depending on the dominating factors, soon turn into a desert, glacier or something even worse.

Ending on a hopeful note seems a bit difficult. But…

“You may say I’m dreamer, but I’m not the only one. I hope someday you’ll join us. And the world will live as one.”