While we continue to talk about how our small efforts can being about a change in the environmental pollution, there are many other factors which contribute hugely to the air pollution. One of the causes of air pollution is the air mode of transport. Do you think it is not so? The plane which goes […]

While we continue to talk about how our small efforts can being about a change in the environmental pollution, there are many other factors which contribute hugely to the air pollution. One of the causes of air pollution is the air mode of transport. Do you think it is not so? The plane which goes smoothly and releases some white clouds behind it does not appear as dangerous as it is.

National Geographic released a report in 2010, which mentioned plane exhaust kills more people worldwide than plane crashes. The estimated number of deaths every year due to toxic pollutants was about 10,000 as per the study. An air plane causes pollution at the time of fueling, take off and landing and while the plane is in flight. So, the air craft cause pollution for most of the time it is in use. The major pollutants include carbon dioxide and water vapor, while some amount of nitrogen oxide and sulfur dioxide are also released during the process.

The emissions from planes are much harmful to the environment than they appear.

According to UN’s World Health Organization, the air pollution causes mostly respiratory diseases, including lung cancer highly responsible for these deaths. Not only the emissions near the land are dangerous, but pollutants released in the sky are harmful in increasing the greenhouse effect and effects like global dimming. Along with air pollution, the other very significant effect is the noise pollution created by an air-plane. The whole city comes to know about the air craft when it goes over it. The booming sound it produces has been a constant source noise.

The rapid growth in the air travels has only contributed to the increase in the pollution caused by the planes. The extra ordinary amount of energy required by a plane can only be obtained through burning of large amounts of toxic jet fuel, which then releases large amount of pollutants. But can much be done about this cause of air pollution? Should the number of flights be limited? Or technology must be improved so as to reduce the emissions or reduce their toxicity.

As the search for a better alternative continued, a huge milestone was achieved in this field, when the world’s first aircraft completely powered by electricity took its maiden flight last month in London. Although the flight lasted for about ten minutes, but the plane can fly for an hour before recharging. The small experiment aircraft called ‘E-Fan’ took off from an airport near Bordeaux in southwestern France. The E-Fan measures a little more than 19 feet and is slightly more noisier than a hairdryer. So, this aircraft technology, when developed can bring air pollution as well as noise pollution in control. 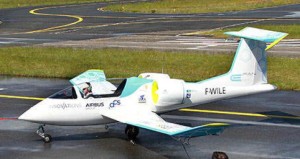 A photograph of ‘E-Fan’, a product of Airbus and a step towards innovation.

The aircraft was powered by 120 lithium-ion polymer batteries, the electrical E-Fan is a highly innovative experiment which has become successful. This has also opened the door for a greener world, with the use of a developed technology and experiments in the future. The introduction of E-Bus can bring significant decrease in the expenditure on air journey. When brought to commercial level, an hour long flight could cost only 16$, compared to $55 for a flight in a petrol-powered plane, as mentioned by its developer Airbus.

Followed by some development, research and more experiments, Airbus will move towards the industrial plan of the same and try to bring in the use of these electricity run aircraft. The two models planned to be manufactured, E-Fan 2.0 and Airbus 4.0 will have some differences. While the former will be used for training purposes only, the latter will be used for both training and general flight purposes. While the former will completely run on electricity, the latter will make use of a hybrid system.

The move by the Toulouse-based Airbus is a brilliant step towards a cheaper, efficient and quieter air flights. Moreover, the use of non-renewable energy will be replaced by electrical energy, thus heading towards renewable energy. While the air pollution and sound pollution created by the planes will be in control, the air-fares will observe a three fold decline. Although the advancement in technology and science will not be able to bring it into usage very early, but this successful experiment has become a pioneer and a ray of hope for a cleaner air travel. Although ships are also responsible for the carbon emissions, but this step will also create opportunities to make the water ways efficient and cleaner. It is science which is the cause of the carbon gas emissions in the atmosphere, but it is science only, which has found a solution to the problem. The only need is to direct the energy and efforts in the direction of saving the planet from the disastrous climate change and global warming.