The Indian heritage, the nation’s pride, the monuments are the cultural threads on the beautiful fabric representing India. Taj Mahal, one of WONDERS of the modern world, the seventh wonder known to be the fame of our country takes its physical base in northern India. The pride of our nation is being pale, gloomy and […]

The Indian heritage, the nation’s pride, the monuments are the cultural threads on the beautiful fabric representing India. Taj Mahal, one of WONDERS of the modern world, the seventh wonder known to be the fame of our country takes its physical base in northern India. The pride of our nation is being pale, gloomy and is reported to lose its lustre since 1998. How can we afford to drive cars when our heritage is driving down? How can we industrialize ourselves at the cost of our monuments, our history, because such a history would not repeat itself, monuments can never be rebuilt, our dignity would never return back.

Taj Mahal, one of the new Seven Wonders of the World, is falling victim to chronic pollution, according to an Indian government report.
India’s greatest landmark is in danger, in need and requires attention indeed! It has been observed since a decade that Taj Mahal is getting a tinge of yellow colour, deterioration of its priceless marble and will even get collapsed due to the drying wooden foundations of the monument. It is being irreparably damaged due to air and water pollution. The Yamuna River flowing beside this beautiful building is one of the most polluted, contaminated and disgusting-looking river which is responsible for the destruction of the monument. Agra, where the Taj Mahal stands, has been polluted heavily by industries and traffic over the past decades. Illegal factories are springing up around the Taj Mahal and uncontrolled construction around the monument seems to be endless. Ground water levels are going down because the population around Agra, is growing and needs more and more water.
Bill Clinton says that “pollution had done what 350 years of wars, invasions and natural disasters have failed to do.” So true!! But the humans were so determined with the negative intentions of completely destroying the environment that they did not even spare the souvenirs. 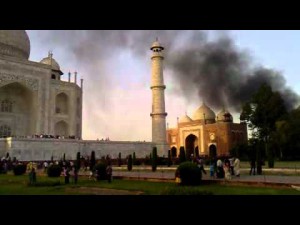 The city is witnessing a rapid increase in industries in and around, population and a never ending growing traffic on the roads which makes vehicles waiting for long in jams resulting in more petrol usage or rather let us call it wastage, more emissions of polluting gases into the atmosphere. The city roads are so congested that for a 15 minutes drive, one has to spend an hour thus consuming more fuels and emitting more pollutants.

Likewise, the river Yamuna also causes deterioration to the monument because the city has an inefficient sewage disposal method. Since most of the untreated sewage has been disposed in the river, the structure of the Taj Mahal has suffered a major damage in the form of the sand damage to the balcony on the river side. Environmentalists studied that the sewage and industrial waste disposed off into the river are not being treated before the disposal. As a result, the rotting sewage materials and the domestic fuels increase the number of microorganisms such as fungi and algae in the river. These microorganisms slowly emit sulfur compounds which corrode the iron joints that hold marble stones together. Therefore, the sacred river Yamuna contaminated because of human interference causes severe rusting of the marble joints that undermine the monument. 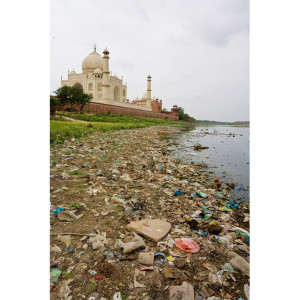 The automotive exhausts have been another leading causes of air pollution which eventually deteriorates the monument. An auto exhaust contributes to the high levels of hydrocarbon, carbon monoxide and nitrogen oxide in the urban air. These sulfur and nitrogen oxides or their derivatives lowers the pH or increases the acidity of the rain in that particular region thus leading to the environmental phenomenon, ACID RAIN. Acid rain is by far the primary reason for the yellowish tinge, a mark of human cruelty that would be remembered for ages by our future generations. The oxides of nitrogen and sulfur falling along with the rain droplets react with the marble and results into a dirty sight of the beautiful monument.
These chemicals react with the surface converting it to the acid form. As a result, the cracks in the stone and the plaster which joins them ultimately weaken the structure. 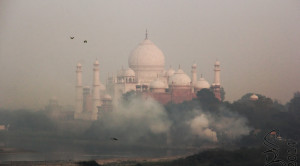 Local industries such as cast-iron foundries and glasswork factories have been the next major cause of pollution that worsens the monument because these industries emit large amounts of sulfur dioxide.
It is when the fuss was created and all this happened that the warning bells went off. The Indian government finally woke up with a jerk in 1998, realized the water rising above the levels, thought of an action plan and started a program to save the monument’s shiny white marble façade because it was turning yellow. Over $150 million were spent on restoration. Some years ago restoration experts started putting mud packs around the façade to bring back the building’s shiny white colour. The government authorities have taken serious steps and measure to protect India’s one and only wonder of the world.

Pollution stations around Agra monitor air quality around the clock. It had made laws regulating traffic on the roads in the periphery of the monument. Car traffic has been banned within two kilometers of the monument. Electric and battery driven cars and buses then take tourists to the site. Camels and horse rides are made popular for taking the tourist to nearby places so as to cut down electricity usage for electric cars. A natural gas pipeline is also in discussion. Factories and industries around Agra should be persuaded to change to cleaner forms of energy.

It took over 20,000 workers 17 years to finish it. Just imagine! Simply for the sake of their hard work, sweat and art, think twice before contributing towards an unhealthy environment, unhealthy not only for living beings but also for buildings and monuments.