Well, a happy summer vacation to those of you who do have one! It’s really a pleasure to sit at home instead of having to step out in this heat (sorry office goers. I feel for you…). Summer hasn’t even got to its full strength yet, but it’s already strong enough to be punishing. I […]

Well, a happy summer vacation to those of you who do have one! It’s really a pleasure to sit at home instead of having to step out in this heat (sorry office goers. I feel for you…). Summer hasn’t even got to its full strength yet, but it’s already strong enough to be punishing. I can’t really tell if temperatures really are rising each year if I’m honest, but I dread to think of what it will be like if temperatures really do continue to rise. For personal reasons, I’d much rather not be boiled, thank you.

The hype about global warming has reached us all. We all consider it a big deal no? But if it’s such a big deal then why isn’t anything done about it? Is it in fact, a big deal, or just some over-exaggerated codswallop? Wait a minute… what really IS global warming??

If those are your thoughts, then you’ve come to the right place. To put it simply, global warming is an unequivocal and continuing rise in the average temperature of Earth’s climate system. Global warming encompasses much more, but it all stems from this one phenomenon of rising temperatures.

So is it a problem? Yes.

Global warming has led to numerous issues such as rising sea levels, changes in the amount of precipitation, extreme weather patterns and events like heat waves, droughts and heavy rainfall, and even species extinction because of changing climate. The impact, being global, has the potential to affect everyone in an unwanted manner. To humans this could also mean food scarcity due to crop failure because of unpredictable and extreme weather. 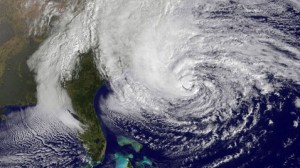 Hurricane’s can also be caused by Global Warming.

Your next question should be, “Are we responsible?” No prizes for guessing the answer. We are.

The IPCC stated in its 2013 report that:

Several greenhouse gases have been identified, like Water Vapour, Carbon-dioxide, Methane and Ozone, but the IPCC has found Carbon-dioxide to be the largest driver of Global Warming. Although water vapour contributes 36-70% to the greenhouse effect, it adjusts readily to local conditions and can condense or evaporate depending on the conditions prevalent, and thus keep a balance. Carbon-dioxide on the other hand tends to remain for long periods of time (hundreds of years) in the atmosphere. This makes it the controlling factor and raises the average temperature.

And yes, we are responsible for increased carbon emissions. I’m quite sure it wasn’t even a question in your mind… Over the past century, the average sea temperature has risen by 0.8 °C (1.4 °F). This may not seem like much, but it is. For the entire Ocean to rise by 0.8 °C would have taken a LOT of heat. Anybody who understands specific heat capacity will know what I’m talking about.

To illustrate this let me give you an example. Specific heat is the heat required to raise a mass of 1kg by 1° C. Water has a specific heat capacity of 4.186 joule/gram °C. A deep bathtub can hold about 200kgs of water. So for the temperature of the water to rise by 0.8 °C in a tub, 669,760 Joules (669.76 KJ) of energy is required. And how many bathtubs do you think will be needed to hold all the water of the oceans? Answer: A HELL OF A LOT! This should give you an idea of the amount of heat energy that has been released, to raise the temperature by 0.8°C.

And human activities have been pushing this rise in temperature. Some of the most prominent culprits of global warming are deforestation, fossil fuel combustion and cement production. And these are processes that are occurring rampantly, ones we cannot seem to avoid, but ones we must!

Deforestation in the Amazon. Another cause of global warming

Options to reduce atmospheric carbon have been investigated, but have either been declared to be ineffective, have harmful side effects, or catastrophic consequences if a small mistake occurs. Our best option is to limit the amount of CO2 emissions, and switch to a greener lifestyle.

To illustrate the vital importance of this let us look at the impacts of global warming. These are: 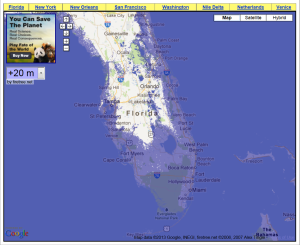 Florida- if the sea level continues to rise 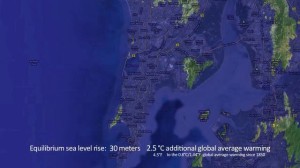 Mumbai after rise in sea levels 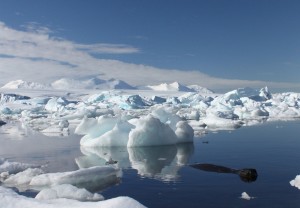 Global warming is setting off many chain reactions that are having disastrous effects on the planet. In this catastrophe we will be caught too, along with many innocent bystanders in animals and plants. Being the trouble makers, we have to set this right. It really is a sad day when we have to prevent us from killing ourselves…