You are here: Home \ Health \ Science \ Are we heading towards a E-Junk World?
Health
0

Are we heading towards a E-Junk World? 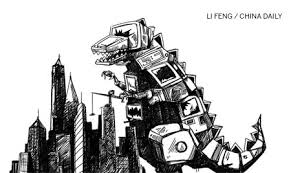 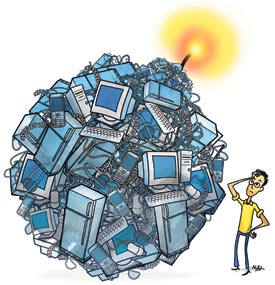 Office electronic gadget, entertainment related devices likes cell-phones, television sets, refrigerators, computers and household-electric devices like air-conditioners, mixer, grinder, toaster, toys, stereo systems, kettles are the gadgets constituting a E-junk world. E- waste can be designed to refuse, reduce, re-use, salvage and recycled. But due to lack of consensus that E-waste should be re-sold, reused or refurbished there is serious increase in the risk involved to the workers and committees dealing with such wastes. Electrical waste contains hazardous but also valuable and scarce materials. E-waste or Electronic waste as it is generally referred to has become a growing concern in the developing countries as obsolete electronic gadgets are increasingly taking up the precious amounts of landfill space and leaking potentially hazardous substances into the environment.
In the last decade E-waste is exponentially growing because the sector producing such products is at its peak. Computers, fridges, and other cooling appliances account for 44% of E-waste. Falling prices, rapid replacement and product innovation like analogue from LCD to LEDs, monitors to flat TVs, various smart phones range, etc are fueling the increase. On an average 50 million tons of E-waste are produced every year. Out of which only 15-20% of the waste is recycled, rest are directly dumped into landfills and incinerators. There’s also a reporting threat that the amount of E-waste would rise up to 500% over the next decade in some countries, like India.
Discarded E-waste contain many toxic and hazardous substances that pose a serious threat to human health and environment. Cadmium has a adverse effect on kidneys and bones. When the PVCs are released in the air they have harmful effects on reproductive and immune systems. Mercury used in lightning devices cause serious damage to nervous system, kidney and brain. Lead causes serious damage to the central and peripheral nervous systems and has the ability to contaminate water supply. Mercury causes bio-magnification, PVC contributes to air pollution and respiratory ailments. Brominated Flame retardants increase the risk of cancer of the digestive and lymph system. Environmental effects in fauna include death, reduced fertility, and slower growth and development. All these shows the adverse effect that E-waste have on the ecology, human security and social aspects. This illustrates the need for a holistic view to be taken in analyzing the present E-waste situation. By 2017 TVs, refrigerators, computers, mobile-phones, batteries could fill up a line of 40-ton trucks end to end on a highway straddling three quarters of the Equator.
Most of the E-waste ends up in landfill or incinerators. Guiyu in China is called the “Electronic dump yard of the World” or the “E-waste capital of the World”. Uncontrolled burning, disassembly causes groundwater contamination, pollution both air and water and several health problems. High levels of lead has retarded the IQ and development of the central nervous system. Bangalore a growing global hub for telecommunications and IT is India’s largest electronic industrial parks producing over 20,000 tonnes of electronic waste every year. Electronic waste from other parts of the world ends up here leading it to the growing e-waste sack in India, terming it as the “garbage City”.
Merely 15-20% of the E-waste is recycled with the reminder ending up in scrap yards. Despite of numerous recycling systems, lack of technology and inconsistent labor laws have helped develop a trend where the waste is incinerated. The facts that E-waste pose a massive problem for the environment, for the people dealing with them, and the people living in the surroundings are well aware among the people. By instituting proper rules and regulations about its handling in recycling stream, most of the problems can be mitigated. There is reported ban on exporting e-waste to dumps, there are loopholes that make it easy to send these items to dumps for cheap processing.
Though E-waste contain several harmful substances, they are a store house for innumerable resources as well. These can be obtained if they are properly recycled. 99% of a PC’s components can be recycled. Glass, plastic, ferrous metals (screws), copper wires, recyclable diodes, steel, aluminum can be obtained. Recycling would provide a new direction to the handling of E-waste. It could help in minimizing the danger to human health and environment. Re-use is an alternate option to recycling as it extends the life-span of devices. Donating old equipments to help illiterate, homeless and needy people is another option. Firms such take the needful steps to remove the worst chemicals from their products in order to make recycling safer and easier. Companies could start an initiative to take back their goods once they reach the end of their useful life for re-use or safe recycle.
Now it is our duty to make our Earth a better place to live. The decision is ours- Either we can continue the same old tradition of piling up our E-wastes or find an alternative solution or find an improved technology to deal with its problems. We shouldn’t be so technologically challenged that we buy every new product that comes in the market. I don’t say we shouldn’t be advanced, but we shouldn’t forget that have a duty towards our environment too and we owe to give our future generations a cleaner and better environment to survive.