Energy exists freely in nature. This energy may be of two kinds- One that exists infinitely (never runs out), this is called renewable energy or non-conventional energy. The other that is present in finite amounts (takes millions of years to form and the sources will run out some day), this is called non-renewable energy or conventional energy. Energy can be called renewable when its source cannot run out or can be replaced easily, when the sources are carbon neutral; that is they do not produce carbon compounds and lead to Green house effect and when they do not pollute the air, water or land (Environment). Hence they are also called ‘Green Energy’. Renewable energy can be easily converted to electricity which can be stored and transported for domestic and industrial use. Biomass, Wind energy, Hydro-power, Geothermal and Solar energy are some common renewable energy. 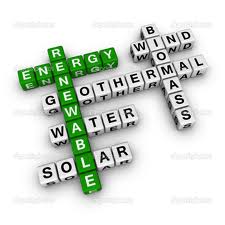 1. BIOMASS-
Biomass comes from naturally occurring things like wood products, dried vegetation, aquatic plant, crop residues and even garbage. They are known as ‘Natural Materials’. With the help of solar energy plants produce their own food(photosynthesis) and store the food inn form of chemical energy. As plants die, the energy remains trapped in the residue. This trapped energy is usually released by burning and is converted into biomass energy.
Wood is a biomass fuel, renewable. Biomass is a widely utilized energy source, due to its low costs and indigenous nature. It accounts for 15% of the world’s total energy supply which is mostly used for cooking and heating purposes. Biomass can be converted into energy by the following process:
• Decomposition – Garbage, human and animal wastes, dead animals and plant residues rot releasing a gas called biogas ( also called methane gas or landfill gas). This biogas is captured by a machine called Microturbine and is converted into electricity. ‘Anaerobic Digester’ is a machine that helps in conversion of animal waste (poop) into methane gas.
• Fermentation- Crops with lots of sugars, like corn and sugarcane produce a gas called ethanol. The process used to produce ethanol is called gasification.
• Burning- This is the most common way of converting organic matter into energy. Wood, waste and other plant residues are burnt which releases chemical energy in form of heat energy that can move shafts to produce electricity. 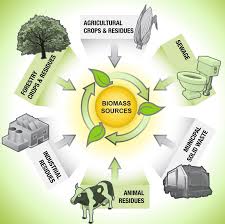 2. WIND ENERGY- Huge convention currents in the Earth’s atmosphere driven by heat energy from the Sun cause winds. This means that as long as the sun shines, there will be wind. Wind carries huge amount of kinetic energy which can be transferred into electrical energy using wind turbines. The blades of the turbine move spinning the shaft which is connected to a generator producing electricity. Wind turbines are usually sited on high hills and mountains ridges to take advantage of the prevailing winds. Windmills can also be used for pumping water and grinding grains.
One wind turbine can produce electricity to power 300 homes. The largest wind turbine in the world is located in Hawaii. Wind energy is the fastest growing sector of all renewable sources of energy. Wind power is a substitute to fossil fuels as it is plentiful, renewable and widely distributed, clean and produces no greenhouse emissions. Capital investment is high but it includes no fuel costs. Government provides incentives to those who use energy generated from wind power. 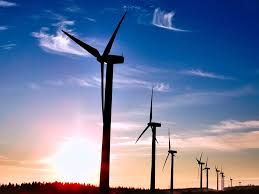 3. SOLAR ENERGY- The energy from the sun is called solar energy. Sun is the ultimate source of energy without which no life can survive and thrive. There are various devices working on this energy source:
• Solar cells: These convert solar energy directly into electrical energy. There are semi-conductors made of silicon alloys in these cells that help in conversion into electrical energy. Thus they are called PV devices or photovoltaic cells.
• Solar panels: Solar panels do not generate electricity directly. They heat up water directly which runs through pipes into a water-head tank usually located on the roof-tops where they can receive the most amount of sunlight.
• Solar hot water systems- Use sunlight to heat water. They can heat water up to 60 degrees centigrade. They can also be used for heating swimming pools.
• Solar distillation- They are used to make saline or brackish water portable. World Health Organization as has recommended this to be a viable measure for treatment of household water and safe storage. Over two million people in developing countries use this method for daily water consumption.
• Solar cookers- These use sunlight for cooking, drying and pasteurization. They are insulated with a transparent lid. They help in cooking between 90-150 degree Celsius of temperature.

4. HYDRO-POWER – Moving water carries lots of kinetic energy. This can be transferred into useful energy in different ways. Water has gravitational potential energy which is released when it falls. Hydro-electricity is the most important and widely spread renewable source of energy. Hydro-power can be used for irrigation and operation of various mechanical devices like windmills, sawmills, textile mills, domestic lifts and power houses.
In India water wheels and watermills were built to produce flour from grain. Hydraulic power networks carry pressurized water and transmit mechanical power from the source to the end. 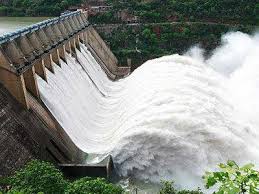 5. TIDAL POWER- Is a form of hydropower that converts the energy of tides into useful forms of power, mainly electricity. Tidal energy is not yet widely used, but has potential for future electricity generation
s. Recent technologies have designed that the total availability of tidal power may be much higher than previously assumed.
Tidal energy is the only energy that draws on energy inherent in the orbital characteristics of the Earth- Moon system. Tidal power has a great ecological impact on marine life. Turbines accidently kill swimming sea life with rotating blades. 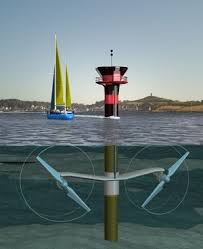 6. GEOTHERMAL ENERGY- Is the thermal energy generated and stored in the Earth. It originates from formation of planet (20%) and from radioactive decay of mineral (80%). from hot springs, geothermal energy has been used for bathing purposes since Paleolithic times and for space heating since ancient Roman times.
It is cost effective, sustainable, reliable and eco-friendly. Geothermal power has the potential to help mitigate global warming if widely deployed in place of fossil fuels. Even though Geo-thermal power is globally sustainable, extraction must still be monitored to avoid local depletion.

Coal, natural gas and oil reserves are finite and hidden. With the growing demand for these, they are bound to vanish in 100-150 years. Moreover Renewable energy is cleaner and more reliable and with fossil fuels depleting in the near future they are the only perfect substitute. They are non-polluting and help in combating the climate change caused by fossil fuels.
Come lets listen to what our earth wants. We have only one earth, lets make both mankind as well as our earth a beautiful and happy place to thrive. 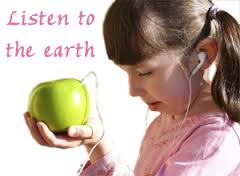