You are here: Home \ Environment \ Resources \ Illegal Sand Mining: The Slow Death of Our Rivers
Environment
0

Illegal Sand Mining: The Slow Death of Our Rivers

At this point in the history of human civilization, mankind has reached heights previously thought insurmountable, even in the most literal sense. Skyscrapers are being built every day, with each day bringing taller and taller buildings with advancements in design and construction. While looking at a building like the Burj Khalifa one cannot help but […]

At this point in the history of human civilization, mankind has reached heights previously thought insurmountable, even in the most literal sense. Skyscrapers are being built every day, with each day bringing taller and taller buildings with advancements in design and construction. While looking at a building like the Burj Khalifa one cannot help but think that mankind has reached such a level of achievement that we have created the opportunity to literally live high up in the clouds, in a world slowly beginning to resemble the futuristic setting of “The Jetsons”, a futuristic 1960s cartoon series that seems almost prophetic now. The wonders of human knowledge and innovation are here for all to see and will likely continue into the future.

These mega structures are undoubtedly a part of what is coming to be described as the ‘concrete jungle’, a term that suggests that our urban spaces are becoming dense jungles of buildings. These jungles can only expand further and grow in their density, as populations grow and the need for space forces human beings to build both outwards and upwards. Buildings are built every day not just for living space, but also for industrial and commercial purposes. Infrastructure such as dams, power stations and pipelines are also built according to the needs of the people. Modern technologies of construction are not just restricted to urban areas, but are also slowly spreading to rural areas, and urbanization itself is consuming rural areas little by little. The material base for this growth is the abundant reserves of natural resources like water and soil. Concrete is made from sand, and hence any kind of construction requires huge amounts of sand.

Sand is obtained through mining, and this mining is usually done along beaches, ocean and river beds. The sand is mined by dredging along the banks to bring up the sediments. It is done either manually or by using machinery. Sand mining causes erosion of the soil along the river bank, and most importantly, the destruction of the river banks causes flooding. Disturbing underwater sand deposits also leads to turbidity and otherwise affects the ecosystem by altering the composition of water. The water table is also affected in areas where mining takes place and this leads to water shortage. Agriculture is affected due to the change in the physical features of rivers. Hence, sand mining in an uncontrolled manner has the potential to affect both the environment and food grain production. 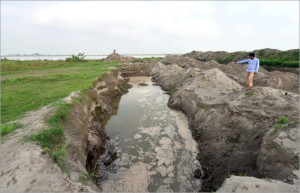 Effect of sand mining on the Yamuna

In India, sand mining is done along rivers, and it is a very lucrative business with disastrous consequences. The sand business was worth Rs. 15, 000 crore in Tamil Nadu alone in 2013. Illegal sand mining is rampant in India, and is as much an environmental issue as climate change or water scarcity. Sand mining thus becomes another way our rivers are looted. Due to the impact of sand mining, the Indian Government has laid down restrictions on mining activities and made it mandatory to obtain an Environmental Impact Assessment clearance issued by the Ministry of Environment and Forests (MoEF) for such activities. There are state laws which also regulate mining. In 2013, the National Green Tribunal issued an order against all sand mining activity without environmental clearance.

Large amounts of sand are extracted every day to supply to industries and construction companies. The growth of real estate has led to an unprecedented rise in construction. States like Tamil Nadu, Maharashtra, Uttar Pradesh and Andhra Pradesh have all been affected by illegal sand mining. Illegal mining is uncontrolled due to corruption and the exploitation of legal loopholes. In Andhra Pradesh, mining has led to groundwater shortage. In Maharashtra, laws have been violated by using machines to mine sand without obtaining environmental clearance. Sand mining has been slowly destroying several river basins in Tamil Nadu, and even dying rivers are not spared. As groundwater levels have dipped, wells are drying up as well. Such a situation has led to water being sold at exorbitant rates, even this is difficult to procure.

What can be done to curb this menace? As environmentally aware members of society, it is our duty to do our part to mitigate the damage done to our rivers. The concept of eco-friendly construction is not completely unheard of, and can be followed to mitigate the impact of illegal, unregulated sand mining. ‘Green Building’ or the use of environmentally friendly construction materials is already being followed in several countries to minimize environmental damage. In India, a Green Building Council was set up in 2001 to develop a sustainable built environment, and this organization has a residential program and rating system to identify sustainable building practices. So, awareness must be spread to the whole of society of this concept and homeowners, builders and vendors must be sensitized.  The rating system must be popularized to ensure that the standards are raised and become mainstream.

An eco-friendly, cheaper alternative to natural sand is manufactured sand.  Manufactured sand is made by crushing ‘blue metal’, a particular kind of rock into fine particles. It has also been proved by studies that manufacturing sand can be used to make better quality concrete. Manufactured sand was made mandatory for all public works construction by the Karnataka State government in 2013. Manufactured sand meets the growing demand for sand at a time when the supply from natural sand mines is insufficient. However, manufacturing sand is still not as big a market as conventional sand, and the shift from natural sand will take time. Awareness has to be spread about this issue, and people need to be sensitized to the impacts of the illegal plundering of our natural resources. So if one wants to do their part to change this situation, one can try to buy manufactured sand to construct their house, or other buildings, and encourage their friends to do so. Manufactured sand is cheaper and hence will bring down the overall construction costs and ease the financial burden on the individual. This is a win-win for both the individual and the environment, and is an important way to reduce our own demand for natural sand.  If sand mining is reduced, groundwater levels may also increase and water scarcity will come down. As it is slowly gaining prominence, finding the sellers of manufactured sand will only become easier in the future.  So opting for the eco-friendly alternative will solve more than one problem. As citizens, we are also concerned about water shortage, and so this gives us an incentive to minimize our own contribution to sand mining.

Housing communities can also make such a decision by collectively opting for manufactured sand. Not just housing communities, but organizations such as construction companies and other institutions can take this initiative. The state has also started to encourage manufactured sand and other eco-friendly materials, so group effort can bring change. The concrete jungle is not going away anytime soon, but with sincere initiative, it can be tempered and brought to a state where it does not harm the environment. One can hope that human innovation will work in new sustainable directions to create a, eco-friendly landscape. In the case of sand-mining, the solution is already apparent and it is up to us to save our rivers coastlines to preserve this world for the future generations.