Marine pollution is the direct or indirect introduction of substances or energy to the marine environment resulting in disadvantageous effect such as hazards to human health, hindrance of marine activities (including fishing), and impairment of the quality of sea water. The ocean is the ultimate sink for most of the waste we produce. It is […]

Marine pollution is the direct or indirect introduction of substances or energy to the marine environment resulting in disadvantageous effect such as hazards to human health, hindrance of marine activities (including fishing), and impairment of the quality of sea water.
The ocean is the ultimate sink for most of the waste we produce. It is commonly used to dispose of waste materials, and many of these substances are toxic to living creatures. These substances diffuse through large volumes of water, which makes them less concentrated and more dispersed. While the overall impact of pollution on the marine environment is unknown, contaminants introduced by rivers, coastal runoff, ocean dumping and various other activities are beginning to take their toll on the oceans.
More than 80% of all marine pollution originates from land based sources which are primarily industrial agricultural and urban. The greatest volume of wastes entering coastal waters and estuaries is composed of organic material. Bacterial break downs organic compounds to stable inorganic compounds such as carbon dioxide, water and ammonia.
Some major types of marine pollutants that have been the focus of recent research are oil, sewage, garbage, solid waste, chemicals and everything that the humans trash after their satisfaction.
Approximately 3.25 million metric tons of petroleum (oil) products enter the earth’s oceans every year. The oil may enter through oil spills due to tanker accidents and leakages, conventional shipping and tank cleaning at sea, waste disposal. Recovery time after an oil spill is 5-10 years, dependent on temperature and wave action. 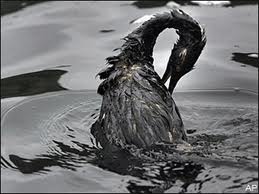 Just imagine, the extent of pollution and the recovery time!
Sewage pollution is yet another deadly pollutant into the sea finding its way from nearly every household. Sewage adds to the amount of small particles suspended in the water column and contributes large amounts of nutrients. 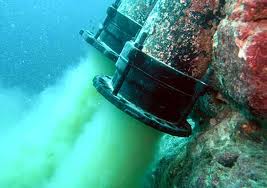 Sewage contains nearly every source of destruction like organic matter, heavy metals, pesticides, detergents, oil and nutrients. Pathogenic bacteria i.e., disease causing bacteria might find their way into different countries and continents through water bodies.
Solid waste pollution has a huge effect on ocean life. It is supported by inert solid wastes with much of it composed of manmade plastics, including polythene containers, plastic sheeting, nylon ropes, nets, and other fishing gear. Plastics are non biodegradable and remain in the oceans for years and years. 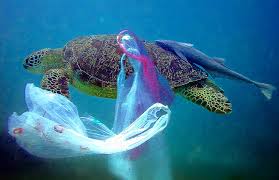 Fishes, birds and turtles mistake plastic for smaller fishes (like jellyfish) and ingest them which choke their stomachs and pipes.
Eutrophication: a term, new to some people, which is keyed to a process where the nutrient levels are very high for the volume of water. It is caused due to release of excess nutrients into coastal waters. Fertilizers used on land are washed into the ocean via rivers and streams. Oxygen consumption increases by bacterial degradation of organic stuff, causing such high concentrations of oxygen that it causes pain in nerves and eventually fishes die.
Waste disposal always has some impact on the environment and in dealing with the pollution problems in one environment (the sea), it is easy to suggest solutions that merely transfer the problem to a different environment for examples merely from sea to land or to the atmosphere or vice versa). What is required is the means of disposing of waste that will cause the least environment damage. This is known as the Best Practicable Environment option termed as Zero waste technology.
• Fostering industrial processes that produce little or no waste (low waste and no waste technology) and by withdrawing particularly damaging substances from use, it is possible to reduce marine pollution.
• It is necessary to establish principles for the disposal of wastes that result in the least environment damage.
• Population control is one of the key solutions to the problem of any kind of pollution associated to waste disposal. Since marine pollution is caused due to waste disposal into the streams, population control would check waste production. It is also related to the use of fertilizers, which get washed away by water. Less population would mean less food requirements for which fertilizers used would lessen. Less population would also check on the petroleum and coal used.
• When a substance is clearly identified as being unacceptably damaging, it may be possible to withdraw it from use altogether, for example DDT.
• Waste discharges should be treated by the best available technology (BAT) to minimize the release of damaging substances.
• Since most of the waste is disposed off in seas, waste segregation is what you can adopt at your level. Countries have strict rules to assure the same, that is fine those who break the segregation rules. Wastes after segregation can be easily processed and treated for safe disposal.
• In most developed countries waste discharge requires some kind of official consent or license.
• When a new discharge is proposed, the discharger must provide a detailed Environmental Impact Assessment (EIA) or Environmental Impact statement (EIS) which predicts the effect of the proposed discharge on the surrounding area.
• On the basis of these EISs and EIAs, a permit may be issued or denied or modifications may be suggested as required.