The goal of all applications of pesticides is to reach a specific site and initiate action there. But, this is not always possible. Some pesticides may not reach the target site as required. This phenomenon is known as a Pesticide Drift. We can define pesticide drift as the unintentional airborne movement of pesticides to non-target […]

The goal of all applications of pesticides is to reach a specific site and initiate action there. But, this is not always possible. Some pesticides may not reach the target site as required. This phenomenon is known as a Pesticide Drift. We can define pesticide drift as the unintentional airborne movement of pesticides to non-target areas. As we are talking about pesticides, it is not necessary that all drifts will be harmful or illegal. The level of drift and its harmful effects depends on many interrelated complex factors. Also, the occurrence of this pesticide drift is not limited to any specific period like during or immediately after application of the pesticide. It may continue for hours or even for days. Low levels of pesticides may be carried over several days covering long distances by air currents.

The public does not completely understand agricultural practices and pesticide applications. This causes worries among the public and overreaction in each and every situation. So much so, that even the application of fertilizers or biological pesticides, like Bt or pheromones, is perceived as a danger!

Pesticide drift is a cause for concern because it removes a portion of the chemical from the intended target, making it less effective there, and it settles where it is not wanted. This puts the safety and health of nearby people, possible injury to desirable plants and animals, environmental quality, and possible pesticide residues on non-target areas into question. This also leads to poor pest control practices, health, environmental, economic, and legal consequences. 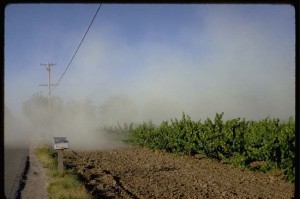 There are two ways by which pesticides can be carried to non-target areas: vapour drift and particle drift.

Vapour drift is the movement of pesticides as gaseous vapours from a target area to an unwanted place. While some pesticides are more volatile than others as they are composed of different formulations, other pesticides have the ability to readily change from a solid or liquid into a gas under the right conditions. This increases the chances of a vapor drift. The occurrence of vapour drift is sometimes very difficult to predict as it relies on factors such as the weather up to several days.

There are a number of factors influencing vapour and particle drift like weather conditions, topography, the crop and area being sprayed, application equipment and methods, and decisions by the applicator. As it is known that prevention is better than cure, there are many ways to prevent pesticide drift. The following points must be adhered to:

A cause for concern

Pesticide drift is becoming a major cause of concern nowadays because of its impacts on the environment. Pesticide drift can result in pesticide exposures to farm workers, children and wildlife and its habitat. These drifts can also contaminate a home garden or another crop land, causing plant damage. When exposed to people, plants, animals, and the environment, the pesticide residues can cause health, environmental effects and property damage. Also pesticide drift is another reason for the pollution of the soil as well as atmosphere. Pesticide drift is also a potential cause of friction between farmers and their neighbours living in an area. Drift can lead to litigation, financially damaging court costs, and appeals to restrict or even ban on the use of crop protection materials. In some cases spraying may be illegal if the proper procedures and authorization is not obtained from the concerned authorities. Therefore, it becomes essential that an appropriate environmental or conservation agency is contacted before spraying.

Users of pesticides must ensure that all reasonable precautions are taken to prevent spray drift. At the same time, the user must take into account the need to protect the neighbours’ interests and other members of the public along with the wildlife and the environment.