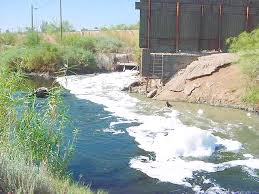 Marine Pollution refers to the pollution occurring due to dumping of waste materials into seas, oceans and other water bodies. The phenomenon of marine pollution occurs when harmful substances enter oceans and chemically harm water bodies and aquatic life. The waste may be industrial waste, agricultural waste or residential waste. Most sources of Marine Pollution are land based. They occur mainly due to non-point sources such as agricultural runoff, wind-blown debris, etc.

What is the effect of dumping waste material into the oceans?

When potentially harmful chemicals are dumped into the ocean, not only does it pollute the water but is a great threat to the aquatic life. We all follow a food cycle, without which the existence of life is incomplete. When harmful chemicals enter the oceans, the indirectly enter our food and then our systems. Let us explain with the help of a simple example: If pesticides enter the oceans (as a non-point source) they are quickly absorbed by the marine food webs. Once in the food webs, these pesticides can cause mutations, as well as diseases, which can be harmful to humans as well as the entire food web.

Now we have tried to examine the effect of marine pollution and what it is. No we will closely and more carefully look into the different ways that the oceans, rivers and other water bodies get polluted and their impact.

These were the different pathways through which pollutants; toxic and hazardous substances enter into the oceans and seas and not only affect marine life but also our life. We must realise the ecosystem is an interdependent balance of us. We all exist in co-existence and if we harm nature and her ways she will harm us back.

After the pathways let us throw some light into the types of Marine Pollution:

o   Acidification: Acidification occurs because the rise in level of carbon dioxide in the atmosphere is taken in by the water bodies thereby making them more acidic. This results in the dissolving or dissolution of calcium carbonate containing substances thereby endangering coral reefs and cause the incapability of sea fishes to create shells.

o   Eutrophication: Eutrophication has been defined as the increase in chemical nutrients in water bodies especially compounds containing nitrogen and phosphorous. These substances reduce the amount of oxygen in the water bodies and affect the pools of fishes and other aquatic creatures.

o   Plastic Debris: The main form of pollution is the rubbish that is floating in the surface of the water discarded by humans. Plastic wrappers, cloth, paper, etc., are some of the most found waste products found in the sea.

These were some of the main types of marine pollution that take place. It is important that we take care of our ecosystem and follow green living. As earlier stated we are highly interdependent on each other and causing harm to one part of the ecosystem will only further cause damage to ourselves. Take the extra effort, be careful and strive for a healthy environment.