In the recent years, there has been a lot of buzz about Narmada Bachao Andolan. This article will try to make some points clears about the project, and on the same time, will try to focus on the different aspects of building a dam across a river. Is it really important to build a dam […]

In the recent years, there has been a lot of buzz about Narmada Bachao Andolan. This article will try to make some points clears about the project, and on the same time, will try to focus on the different aspects of building a dam across a river. Is it really important to build a dam and challenge the course of nature? Thus,. Coming to the broader question of priorities-environment or development.

There might be a lot of talking about developmental plans, but the 250,000 people displaced are the real reason for protests.

Narmada River flows through the two Indian states, Madhya Pradesh and Gujarat. The government is planning to build 30 large, 135 medium and 3000 small dams on River Narmada to harness its water. Building a dam can provide a boost to the economy of a nation. Constructing a dam means production of electricity at a constant rate for many decades, so fulfilling needs for the future generations as well. The generation of electricity can be controlled, and the electricity produced is used for household and industrial purposes. Moreover, this process of electricity generation is completely free from any type of pollution, thus, does not contribute to greenhouse effect at all.

One of the largest dams in India, Bhakra Dam provides irrigation to about 10 million acres of fields in Himachal Pradesh, Haryana, Punjab and Rajasthan, also preventing the monsoon floods in the region. The total capacity of the power houses is 1325MW, which tries to fulfill the electricity demands.

The building of dams on Narmada River preaches of benefits including drinking water, irrigational facilities and electricity generation. So, if these dams are such relief to water and electricity demands, why are protests like Narmada Bachao Andolan born? The major reason is that construction of a dam needs large area and is very expensive. The building of dams on Narmada River will displace thousands of people of various communities and will result in a huge loss to the forest cover in the area. The opposition team, consisting of Medha Patkar and Baba Amte, believe that the planning is unjust. 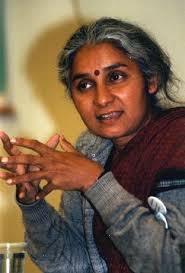 One of the most active personalities related to NBA, Medha Patkar.

There have been many protests, marches, hunger strikes and meetings, along with attracting supports from many celebrities like author Arundhati Roy and actor Aamir Khan.

It is important to understand that the compensation provided to the poor people, who will be displaced becauswe of these projects, might not be enough for them to restart their life. The project has invited huge contribution of people like Medha Patkar, who dropped her Ph.D. studies to devote her time entirely to Narmada Bachao Andolan.

On the other side, there are claims that building of dams will fulfill the water demands of the drought prone areas of Gujarat, like Kutch, Saurashtra and North Gujarat. But on the grounds of reality, building of these large dams will provide financial benefits to a small group of people and will destroy a large group of people who will be displaced. Owing to its continuous and dedicated efforts, Narmada Bachao Andolan received the Right Livelihood Award in 1991. 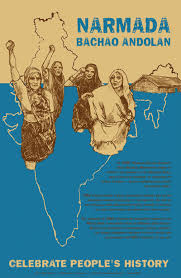 Narmada Bachao Andolan has attracted concerns about the region, from environmentalists and human rights activists.

Also, there have been instances where building of large dams has triggered earthquakes in the region, as in the case of Hoover Dam in the USA. Building the dam also affects the natural water table, as in the case of Aswan Dam in Egypt. Some salts and minerals get accumulated in the stone and can provide harm to the nearby areas,

Along with this, the building of dams has also resulted in the conflict of water among many countries, as well as among states. India is facing conflict with Pakistan, China and Bangladesh over the water issues. There are similar issues among states as well. Releasing water at a wrong time may cause floods in the area, and holding the water may result in drought. So, this control of human beings on these natural resources has the potential to disturb the flow of life. 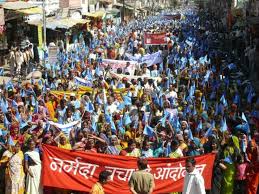 The protests have tried to keep the plans restricted and paused the whole process of dam building in the area.

Dams, on one hand, appear very helpful for the development of the region and at the same time, appear to be causing harm to the environment and the inhabitants of the area. So, there is a need for careful planning and implementing of the plans at precise locations in order to yield beneficial results. It is important to take environment along with development. It really is. Might be difficult, but it is important.