You are here: Home \ Environment \ Science \ ORGANISM AND THEIR CHARACTERISTICS
Environment
0

ORGANISM AND THEIR CHARACTERISTICS

ORGANISMS AND THEIR CHARACTERISTICS Imagine yourself on a nature exploration trip to a place with pristine beauty. To preserve the memory of your trip, while taking the photographs you may also like to note down the names of the organisms familiar to you, and make sketches of the unfamiliar ones. While going through this exercise, […]

ORGANISMS AND THEIR CHARACTERISTICS

Imagine yourself on a nature exploration trip to a place with pristine beauty. To preserve the memory of your trip, while taking the photographs you may also like to note down the names of the organisms familiar to you, and make sketches of the unfamiliar ones. While going through this exercise, you would consciously or subconsciously be, making a difference between the living and non living things utilizing some sort of criteria. Would you now like to stop for a moment and think about the features based on which its instantly clicks to you that this insect is a bee, and that small bird hovering on the flowers is a humming bird? I may like to answer some sort of mind games through this. 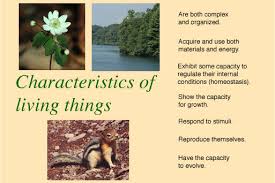 A large number of diverse living beings inhabit the Earth. There are six groups of organisms such as viruses, bacteria, fungi, protoctista,  plants and animals. Except virus, all the other organism are grouped into five kingdoms: KINGDOM BACTERIA, FUNGI, PROTOCTISTA, PLANTAE, and ANIMALIA, respectively. Of these types, viruses and bacteria are not visible to the naked eye and a Microsoft is essential to observe them.

Virus: They are much smaller than cells. A virus consist of a protein coat, and a nuclei acid core, made up of either DNA or RNA. All viruses are not same in shape. The most interesting thing is that the viruses exhibit some features of the living organism and in some respect they resemble the non living things. Many human diseases are caused by viruses. The common ones are chickenpox, mumps, measles, AIDS etc.

Bacteria: They are amongst the most ancient organisms and often they are smaller than eukaryotic cells. They are categorized into two sub kingdoms as Archaebacteria and Eubacteria. Depending upon their shape, bacteria can be categorized into three fundamental groups i.e bacilli (cylindrical or rod shaped ones), Cocci (spherical to ovoid) and Spirilla (helically coiled).

Some bacteria are useful to us as well as some are harmful to us too. The beneficial ones fix atmospheric nitrogen and likewise there are several of them. The harmful bacteria caused diseases in humans, animals and the cultivated plants.

Protoctists: They comprises the eukaryotic micro organisms and their immediate descendents. They have all the organelles with which you may be familiar: a nucleus, mitochondria, endoplasmic reticulum, Golgi apparatus, and so on. No one knows the exact number of protoctist species, and so far more than 10,000 live protoctists are described in the biological literature.

Fungi: Moulds, mushrooms, yeasts, and other spore- producing forms constitue fungi. The growing form of fungi is a large mass of multicellular hyphae called mycelia. Many fungi yield products that are useful to humans. Some are the sources of pharmaceuticals that include vitamins, interferons which prevent viral infections and steroid hormones.

Fungi enhances flavour, colour, protein content and preservation qualities when used in the production of beverages and food. Moulds and yeasts have an important role in cheese, beer, wine and soy sauce production. Several kinds of fermentation reactions on commercial scale are carried out by fungi.

Plants: All plant species are eukaryotic,multicellular autotrophs that generate their organic nutrients through photosynthesis. Most plants have leaves as solar energy collectors, stems to support the given energy collectors and roots to anchor the plants and absorb water and nutrients  from the soil.

Cell walls of plants are made up of cellulose.

Animals: They are quite distinct from the members of other kingdoms. They are eukaryotic multicellular and diploid organisms that developed from the two different gametes, which are known as sperms and eggs.

Origin and distribution of life:

Now we know that how to differentiate the non living from the living and about the type of living organisms. Now let us move on the fact that from where the life originate.

There is no direct evidence concerning the origin of life. Most researches agreed on a general outline of what may probably have happened. The earth is believed to have formed about 4.6 billion years ago from the aggregates of dust particles and debris.  With time, it started to condense and the stratification of its components begin to occur. The heavier metals such as hydrogen, helium and the noble gases rose to the surface forming the early atmosphere.

With the further cooling of earth, water vapours condensed to form oceans and the gases trapped within the oceans underwent a chemical evolution, an increase in complexity that eventually produced the first life molecules and then cells. It is believed that the diverse kinds of plants, animals and other organisms evolved from the primitive cells over millions of years under the influence of several geological events. The geological time scale based mainly on fossil evidences, depicts the evolution of major groups of organisms with time. The geological time period has been sub divided into different eras. The appearance of major group of organisms in different periods of era is depicted in this time scale. It is evident that the life began with the simplest of organisms and progressed with ever increasing complexity.

A reasonable explaination is that the primitive forms gave rise to a large number of complex forms.

The two fundamental aspects of life are  its unity and its diversity. All organism are alike in sharing their common origins, in adhering to the same rules that govern the organisation of matter and energy, and in having the set of metabolic processes, mechanism for homeostasis, and specific molecular basis for inheritance.

There are many millions of diverse organisms. They have been characterised into six groups: viruses, bacteria, protoctists, fungi, plants and animals.

All organism of living organisms are dependent on the energy. Carbon is the main source of energy for them. Autotrophs synthesize their own food via photosynthesis and chemosynthesis and heterostrophs take readymade organic matter as the energy source.