You are here: Home \ Environment \ OVERFISHING – Wake up call!
Environment
0

For centuries, our seas and oceans have been considered a limitless source of biodiversity and food. However, increasing fishing efforts over the last 50 years as well as unsustainable fishing practices are pushing many fish stocks to the point of collapse. The basic meaning of the term “over fishing” is when more fish are caught […]

For centuries, our seas and oceans have been considered a limitless source of biodiversity and food. However, increasing fishing efforts over the last 50 years as well as unsustainable fishing practices are pushing many fish stocks to the point of collapse.

The basic meaning of the term “over fishing” is when more fish are caught than what can be replaced through natural reproduction. Over fishing has serious consequences even though gathering fishes is a profitable practice. Most of the people around the whole world are dependent on fish and the marine world for protein. For others, fishing is the main livelihood for millions of people around the world. The results affects the balance of ocean ecosystem and also the economic and social well-being of the communities dependent on fish for their livelihood.

One definition states over fishing as – “The practice of commercial and non-commercial fishing which depletes a fishery by catching so many adult fish that not enough remain to breed and replenish the population. Over fishing exceeds the carrying capacity of a fishery.” 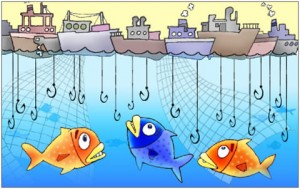 Impacts of over fishing

Why is over fishing a problem?

The FAO (Food and agriculture organisation) scientists publish a two yearly report (SOFIA) on the state of the world’s fisheries and aquaculture. The report suggests that:

A total of almost 80% of the world’s fisheries are fully- to over-exploited, or depleted. Worldwide about 90% of the stocks of large predatory fish stocks are already gone. In the real world we are losing species as well as entire ecosystems. As a result the ecological unity of oceans is under stress and at risk of collapse. We are under a very big threat of losing a valuable food source on which many depend to fulfill their social, economic or dietary reasons.

What is to be done?

If we want to we can reverse most of the destruction. In some situations it might take a decade, or maybe many centuries. But, in the end we can have productive and healthy oceans again.

Safe catch limits
A scientifically determined along with constantly reassessed limit on the total population of fish caught and landed by a fishery should be taken up by the concerned authorities.

Controls on by catch
Useful techniques and proper management rules should be followed to prevent the unintentional killing and disposal of fish and other life forms of the oceans which are not a part of the target landed.

Protection of important habitats
The key parts in ecosystems should have full protection from destructive fisheries. The spawning and nursing areas of fish or the delicate sea floor for example, should be carefully protected.

Monitoring and Enforcement
A monitoring system to make sure fishermen do not land more than they are allowed to. Avoid fishing in closed areas and follow the rules set by the authorities completely.

Be informed
Try to gather more information about over fishing. Also, keep in mind that while this is a global problem every local situation is different.

Know what you eat
If you eat fish make sure that you know what you are eating. Try to choose the one which has the lowest impact.

Spread the word
Let as many people know about this menace and its disastrous after effects.

In the end, we need to make sure that the management systems based on these rules are implemented everywhere for successful saving of the marine life.