You are here: Home \ Environment \ Science \ They too have the RIGHT to LIVE- Ban on the use of animals for drug development or medical research!!
Environment
0

They too have the RIGHT to LIVE- Ban on the use of animals for drug development or medical research!!

“He prayeth well who loveth well, Both man and bird and beast” said Collridge, throwing light on the importance of showing benevolence and compassion to animals, as we do for human beings. Animals like us, experience pain and suffering. They too are as much as God’s creation as man himself. They too have all the […]

“He prayeth well who loveth well,
Both man and bird and beast”
said Collridge, throwing light on the importance of showing benevolence and compassion to animals, as we do for human beings. Animals like us, experience pain and suffering. They too are as much as God’s creation as man himself. They too have all the rights to live the way they want. But we humans take them for granted and behave and use them the way we want to. We treat them to be objects and perform all our trails and experiments on those poor little creatures. Use of Guinea pigs, for drug-development or in field of medical research, is totally uncalled, inhuman and unethical. It is not only unnatural but also unjustifiable on moral, ethical and social grounds.

Man has from time immemorial, exploited animals to serve his ends. They have been used for making his life comfortable by catering to his various needs and demands. It is therefore against the basic tenets of morality to perpetuate pain and suffering on those poor creatures, such as dogs, pigs, frogs, etc on the pretext of facilitating medical research. We humans have no rights to destroy, what we cannot create. The life of an animal is as precious and valuable, as that of a human being. Destroying and trapping them in this manner, is but trampling on their basic right to live. Animals and humans are similar in many ways- they both feel, think, behave and experience pain. Thus, animals should be treated and given the same respect as that of humans. Moreover, the Food and Drug Administration has reported that 92 out of every 100 drugs that pass animal tests fail in humans. Thus, it is a bad science.
People often advocate to use animals for medical research, on the grounds of expedience for the larger benefit to mankind. Can such an absurd logic justify daily extermination of the millions of frogs, birds, etc. by school and college going students, to make them aware of the basic metabolic system? We are all well aware that only a miniscule number of students actually pursue a career in medical or pharmacology. The majority migrate to other fields of commerce and arts. What a colossal waste of precious animal lives sacrificed at the alter of the above pretext, with no benefits accruing to the human race. The pain and sufferings that experimental animals go through is not worth human any benefit to humans. Testing of products on animals is completely unnecessary as there are many alternatives available. 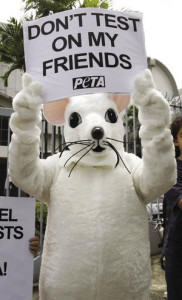 Such ruthless and senseless killing of animals, must make us hang our heads in shame. It shows how insensitive we have become towards the other living creatures on this planet. At the same time, killing them in such a wanton manner, makes us cruel and uncaring for life, even towards our own fellow human beings. This callous attitude to life is reflected in the growing incidence of violence in the society, especially among the youth.

We have over centuries relied and used animals to enrich our lives. This however does not give us the license and rights to sacrifice their lives, for our benefit and to full-fill our needs in the wanton manner as it is being done today. Our senseless acts committed in the past have already made many species of animals extinct today, many are on the verge of extinction, many have become vulnerable and rare today. This has seriously and dangerously altered the ecological balance of the nature. We can only advocate the above to our own peril.

Some people think that animal testing is acceptable because animals are lower species than humans having no or little rights. The need of this hour is to develop advanced technology, to stimulate the various life processes for drug development or medical research. We should only in special cases use animals for testing and trial. This would minimize our interference with nature and at the same time respect the animals, right to live.

The world doesn’t need another drug, medicine or food ingredient so badly that it should come to the expense of a poor, innocent animals life. To prevent further environmental degradation, we should strictly ban the use of animals for drug development and medical research. This will be beneficial to the environment as well, as many species of its flora and fauna would be far from threat. This will help us make our universe a better place to live with less pain and suffering, to all living beings, be it Man or Beast. Humans cannot justify making life simpler for themselves by torturing thousands of animals to perform random experiments every year or use them for product testing. Animals must be treated with the same respect and dignity as humans. Man should not exploit nature’s creation for his selfish needs without forgetting that humans are animals too, thought much evolved but we too are social Animals.