Tell your ACs to take a chill pill!

Come on, it’s just April, The Earth month. So, the tip of the Earth month is: “This summer tell your air conditioners to take a chill pill and hibernate as long as they can.” The Air conditioners are operating ironical to their name, and heating our planet Earth. Just for the sake of cooling our […]

“This summer tell your air conditioners to take a chill pill and hibernate as long as they can.”
The Air conditioners are operating ironical to their name, and heating our planet Earth. Just for the sake of cooling our rooms, what we are depleting is the ‘Blanket’, the ozone layer.
They are just injecting additional carbon, and other green house gases and making the temperatures sky rocketing. The carbon and other green house gases are known to trap heat from the sun and thus lead to the average global temperature to rise thus leading to Global warming. 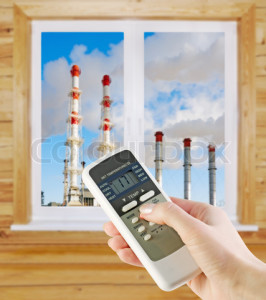 Air conditioners have no positive aspect when it comes to environment.
The amount of electricity that’s used for air conditioning is a huge part of an energy load for most countries, and it’s going up, and each coal or fossil fuel burnt to run the air conditioners are leading to the emission of harmful gases thus depleting and destroying the environment dually.
Energy consumption- the electricity generated to power the air conditioning is affecting both human health and environment, thus carrying both global and personal health consequences. The energy needs are going up with the present day rise in demand of these air coolers. While burning fossil fuels such as coal, to supply electricity for these appliances, power plants are forced to discharge carbon emissions and clouds of soot into the atmosphere. Air conditioner use in the U.S. results in an average of about 100 million tons of CO2 emissions from power plants every year. Vehicle air conditioners are the sole consumers of large amounts of power.
The world is warming, incomes are rising, and smaller families are living in larger houses in hotter places. What perfect idiotism.
The energy consumed today for air conditioners by one family could thus be saved and used by 2 to 3 families using the conventional fans, coolers, etc.
CFCs
The chlorofluorocarbons used in air conditioners as refrigerants are proving to be the most disastrous in the environmental world as it tends to deplete the ozone layer protecting the earth from the very harmful ultraviolet rays coming from the sun. These UV radiations are studied to be carcinogenic and even poisonous. Different types of refrigerants have been used in air conditioners over the years. The discovery that chlorofluorocarbons (CFCs) are major contributors to ozone-layer breakdown prompted an international response that led to the creation of new coolants
What are cfcs and how do they affect the ozone layer?
It was discovered in the mid-1970s that some human activities could destroy ozone and deplete the ozone layer. Ozone depletion has been found to occur through the following types of compounds- chlorofluorocarbons, nitric oxide, and atomic oxygen.
Chlorofluorocarbons are the compounds containing chlorine and fluorine these are introduced into the atmosphere and thus slowly diffuse into the stratosphere. These are also called freons. Thus the chlorine in the CFCs attacks the ozone molecules six times than any of the other green house gases and destroys stratospheric ozone

Formerly used as cooling agents, ozone-depleting chlorofluorocarbons (CFCs) have been replaced by hydro chlorofluorocarbons (HCFCs), which deplete 95 percent less ozone.
Disposal
Federal law requires that HCFCS should be recovered from air conditioners and other appliances before they are disposed off or dismantled for recycling or dumped into landfills and the EPA is authorised to fine and punish those who fail to obey the federal law of recovering HCFCs. Before discarding out units we must search for a company that recovers the HCFCs and is EPA certified. Thus without the safe recovery of HCFCs the disposal of air conditioners is again a major drawback of these appliances.
Personal Health
In the midst of boiling heat waves, the air conditioners can be a life saver, protecting against heat stroke and hyperthermia. But air conditioners are not that cool in action. They require proper maintenance; else can be disastrous and poisonous. Dirty filters can allow allergens, pesticides and other particulate matter to find their way into our rooms, posing threat to indoor air quality. Exposure to those pollutants can trigger a host of health problems, including allergies and asthma and eye, nose and throat irritation.

Currently, efforts are being made to develop newer and greener technologies to substitute these air conditioners with low energy consumption and less polluting appliances. Passive cooling projects in China, India, Egypt, Iran, Namibia, and other countries combine traditional technologies-like wind towers and water evaporation Solar adsorption air conditioning performs a magician’s trick, using only the heat of the sun to cool the indoor air, but so far it is not very affordable or adaptable to home use. Meanwhile in India and elsewhere, cooling is being achieved solely with air pumped from underground tunnels.

Countries are already struggling to meet growing energy needs, reducing carbon levels and emissions of other green house gases, disposing waste and what not! But the solution to all these problems lies here. Avoid the use of ACs to an extent that you can contribute to the the betterment of the environment as well as the health of the people around you.