Around 2 years ago, I visited Germany. It was a short trip; I spent just a little over a week there. But that little outside excursion, out of our beloved country, told me a lot! Of course, travelling will open your eyes to the vast differences that arise between cultures. But that is not what […]

Around 2 years ago, I visited Germany. It was a short trip; I spent just a little over a week there. But that little outside excursion, out of our beloved country, told me a lot!

Of course, travelling will open your eyes to the vast differences that arise between cultures. But that is not what caught my eye. What did was how clean the place was!! I could have slept on the road! Not a single piece of plastic or paper lying anywhere. Not a single drain clogged. Being my first trip abroad, I really wasn’t expecting this. Yes, I’ve heard a lot about how clean and tidy European nations are and all that. But I expected a more realistic scenario. Less junk, in fewer places. But not NO junk! That’s fairyland… but apparently fairyland is inspired by the parts of Germany that I saw. 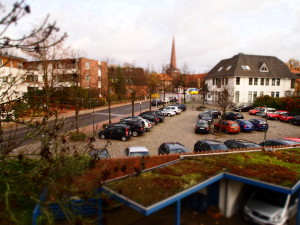 Compare the above pics with this:

Now please don’t go labeling me as a desh-dhrohi and whatnot… I love this crazy country. But the cleanliness there really left me disoriented. It’s like my mother was given free reign over all the streets. Only some lonesome specks of dust were left wandering aimlessly. Contrast that with the familiar sight of overflowing garbage bins over here, that alert you to their presence a good 500m away. It’s quite a change.

Some of this you can attribute to the size of the population. Germany’s total population numbered 81.89 million people in 2012, whereas India’s population was estimated at 1.22 billion people! Naturally there’s going to be more garbage…

But the real difference is in the mentality. How many of you reading this have NEVER thrown trash on the road? How many of you haven’t thrown rubbish on the road in the last month? Some of you throw, and accidentally miss the bin, but how many of you have gone back, picked it up, and put it back in the bin? Mighty few is my guess. I’m so skeptical about this because I see no difference in any age group. We see garbage, and we add our own bit. Just for good luck. Elderly people, who you’d think should know better, throw garbage on the road. Middle aged people do it too, and without even the slightest hesitation. So much for all the education and qualifications… Outside my college too, students my age throw anything inconvenient onto the streets. Be it loose paper, a flyer, the paper plate they were eating from… anything at all. The college has a dustbin, the food stalls outside have bins too. Is it really so hard to move a few paces and dump it where it belongs!? We all KNOW this is not a good habit. So what is there that’s stopping change? The answer: NOTHING! There is absolutely nothing that justifies this behavior. What are the things we normally say to ourselves? “It’s already dirty”, “What’s the big deal if I throw just one piece of paper”, “I don’t want to sit with this all the way home”, “It’s okay, it’s only this time… next time I won’t”. Just take a look at the flimsy excuses we give ourselves. It takes a level of stupidity bordering on talent to believe these excuses are justified.

In other cases, we just couldn’t care less about any inconvenience we may cause to others as long as it is convenient for us. These people I especially hate. My mother related an incident to me once. She was walking down the Lokhandwala market road with my sister when a car pulled a little ahead of them. The window came down and a red bull can came out. Apparently the car held a young couple, and of course the boyfriend was busy trying to impress his gal (a “boor”, is how my mother described him, and the girl with him, poor thing, obviously lacked any sense of judgment. A couple made for each other). My mother, walked up to them, picked up the can and handed it back to the girl who threw it and told her to throw it in a bin. She just stared back at my mom with a dumb expression (mom later informed me that she didn’t think the expression could change, with all the heavy make-up stuck on her face). The car moved ahead and the can promptly popped back out. The brats even turned around and drove past just to flash their middle finger at my mother. I thank God I wasn’t present that day or I would’ve shattered their windshield and dumped their junk back in their lap. And you know the best part? If I was present, and I did break that windshield, everyone on the streets would have labeled me as the criminal, and completely forgotten about their callous attitude and disregard for public property. Contrast this little episode with my host in Germany, who upon spotting a bottle in a field, instinctively changed his direction, retrieved the bottle, and put it in the nearest bin. A pessimist I may be, but I’ve met too many scumbags, who’ll simply blurt out in that boisterous, fog-horn manner of theirs, “Arey phekh na! Kya farak padta hai!”

It is a shameful truth. There are those of us who are so self-centered that they couldn’t bother about any other human, let alone the environment. All the dirt and filth thrown ends up clogging gutters, polluting the water, or attracting flies and mosquitoes. Any place a plant may have a chance to grow (and God knows there’s little enough of that in this city) is also choked by plastic and filth in all shapes and smells. It kills any passerby with a sense of smell, and makes the place look ever so picturesque.

And like stereotypically stupid people we blame the government. How embarrassing. How on earth can we blame the authorities when they have made the outlets for the water to drain away, but we go and clog it with junk! Oh they must take their share of the blame… They too are more interested in building another temple to an umpteenth god, rather than focusing on the overflowing garbage issue. But at the end of the day, it is us who have gone and let this run out of control. We litter. We stand by while others litter. We don’t bother telling the rickshaw driver to stop spitting on the road, because it’s oh so hard to get a rickshaw as it is, right? We turn a blind eye when our child throws his wrapper out the window; in fact, most of the time, it is the parents who tell the child to throw the wrapper out!! All so that the car doesn’t get dirty. And the road? The environment? Dirtying that is fine?

We are all guilty of littering at one point of time or another. If not littering ourselves, then we’re still guilty for not raising our voice every single time someone litters. Every case of malaria, every case of dengue, every case of cholera, dysentery, respiratory allergy, typhoid etc that takes the life of someone, we are guilty. All these are diseases caused by accumulation of garbage, and we have not done enough to prevent it. Every clogged drain we are responsible for, every bit of garbage that is out of the community bin we are responsible for. Every time we keep our mouth shut, and don’t tell a friend to pick up that scrap he just threw, we are responsible.

If you have read this article, I sincerely hope that we could work together to make a difference. I have a dream to see this nation clean while I still live. If you do too, then you know what to do.