The men were covered with grime. The fire at the top of the set up was flaming up constantly, fed by a steady supply of oil dug up from its oceanic sediments abode. The rig was functioning well. The offshore oil drilling rig was such a success! Who cares if the setting up of the […]

The men were covered with grime. The fire at the top of the set up was flaming up constantly, fed by a steady supply of oil dug up from its oceanic sediments abode. The rig was functioning well. The offshore oil drilling rig was such a success!
Who cares if the setting up of the rig and the machinery had disbanded a large amount of sediments from the ocean floor?
Who cares if the leaking oil killed a lot of marine life?
Who cares if the oil rig was sending off green house gases into the atmosphere?
The ugly truth behind the petroleum that fuels our vehicles’ engines is that it is murderous. Offshore drilling is an environmental hazard that is talked about much less than is required at present.

Offshore oil rigs are set up on the ocean floor that is free from the continental shelf and have evidence that proves that crude oil is present in large quantities in those regions. Preliminary studies are conducted by oceanographic and geological surveys to study the oil-rich pockets. Then, the feasibility of setting up the rig is studied. Finally, with a lot of engineering, infrastructure and work, the oil rig is set up. It provides a lot of oil, export money to the nation and economic progress but at the cost of a disturbed marine ecosystem.

• Whenever there is an offshore rig, environmental impacts double up. We are not only digging underground but digging underwater as well. The terrestrial sediments are indeed harmed along with the marine life above it.

• Harmful effects of oil drilling are caused by many components of the set-up, procedure and machinery. Deck run-offs, brine waste and pipeline leaks are some of the common causes of sea pollution by off-shore oil rigs.

• When oil is taken up a lot of hazardous and toxic chemicals are left back in the sea. Heavy metals like lead, arsenic and mercury are naturally present under the oceanic floor. Under normal conditions, the harmful effects of these heavy metals are not perceived as they are buried deep under the organic sediments in the oceanic floor. However, when oil is taken up, the layers of sediments are disturbed, these toxins get dissolved in the ocean waters, they cause harm to marine life. The reproductive system, nervous system and shoaling patterns are affected due to heavy metal poisoning in many fish species of the ocean.

• Seismic waves and signals are used to locate oil pockets in the sea can disorient marine mammals, especially whales and harm other organisms in general. Due to oil searching operations, more than 100 whales had beached themselves due to an error in navigation and geographical orientation. 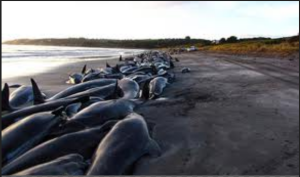 • The infrastructure of these rigs is also harmful. The canals built for transport often lead to erosion.
For example, the Louisiana canals have not only caused erosion but have also harmed marshlands as well. Marshlands have very delicate ecosystems and a little change can impact it adversely. It also took away important an important storm buffer which magnified the effects of Hurricane Katrina.

• Accidental fires also expel a lot of smoke and green house gases in the air. 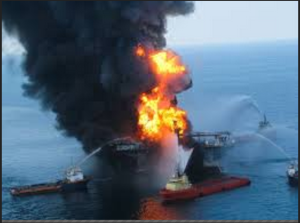 • Oil spills are the most infamous effects of oil rigs. The world is still seeing the after-effects of the Exxon Valdez oil spill of 1989. The immiscible oil layer over the water cuts of a lot of scope for diffusion of gases from the ocean to the atmosphere. Light penetration to the shallow continental shelf is also reduced, resulting in a lower photosynthetic rate from the marine fauna. The birds that dive in the ocean for fish or prey get covered in oil and cannot fly further, ultimately dying of starvation. 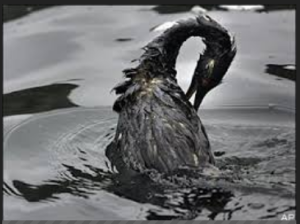 • Sometimes oil spills are so wide spread that they permanently damage coastlines and render them unfit for human use as well. Many beaches and shores have fallen prey to the slime that comes along with the incoming surf.

• Drilling mud is used for lubricating the pipes. Each drilling platform drills around hundred wells and leaves around 90000 metric tons of discharge in the ocean waters. These discharges contain toxic chemicals that are not only harmful to marine life but may pose threats to human health as well. Metal cuttings are usually dumped into the ocean instead of bringing them to land for proper disposal.

• Human accidents and sometimes casualties are also reported due to people getting stuck in drilling mud, falling off-board, etc.

• Off-shore oil rigs may also attract sea birds even at night, which is not in accordance with their sleep patterns. A lot of bird deaths occur as they are incinerated by the flame. Some die as they cannot fly due to oil sticking to their wings. Physically colliding with the rigs and getting caught in the machinery are also responsible for bird deaths.

• Black carbon produced by flaring is a big reason for climate change.

Off-shore oil rigs are the primary reason that we can speed around in our cars and fill up petroleum as and when we need. What we do not understand is that the oceans are paying for our reckless wants. Strict safety measures and cleaner , ecologically aligned techniques need to be used along with sustainable extraction of oil. Nature has already begun showing catastrophic vengeance in the form of hurricanes and global warming and a sea full of dead fish. 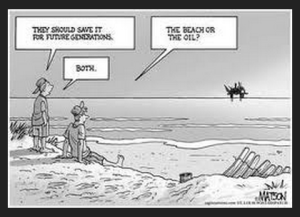 Don’t be surprised if you find your tinned tuna already in drilling oil.