You are here: Home \ Health \ Smoking- A Style Statement or A Cause of Cancer?
Health
0

Smoking- A Style Statement or A Cause of Cancer?

“Can I have a packet of ‘Marlboro’ cigarettes?” “Sure. 70 bucks”, replied the shopkeeper. “Here.”, said Aman after taking the third packet in the day.   Smoking continues to be one of the major hobbies taken up by the youngsters these days. And not only hobbies, it has somehow crept into the lifestyle, with the […]

“Can I have a packet of ‘Marlboro’ cigarettes?”

“Sure. 70 bucks”, replied the shopkeeper.

“Here.”, said Aman after taking the third packet in the day.

Smoking continues to be one of the major hobbies taken up by the youngsters these days. And not only hobbies, it has somehow crept into the lifestyle, with the tattoo of being cool attached with it. Worldwide, one in five teens aged 13 to 15 smoke cigarettes. Such level of ignorance of health among the youth is dangerous and has its own type of problems. 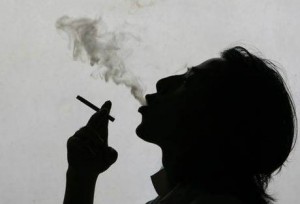 Smoking enters the life style as a style statement for many, and ends up with the consumer in a lot of trouble.

The major problem is that most of the youth smoking is completely aware of the fact that smoking is injurious to their health. Even the cigarette packets, these days, come along with a specific warning- “Tobacco causes Cancer.” Or “Smoking is injurious to health.” But still, the warnings are completely futile and the consumption of cigarettes and other tobacco products is observing a rise nowadays.

Smoking has some very harmful effects, which are still unknown to many people. The radiation from smoking a pack of cigarettes a day compares to almost 2000 chest x-rays! And it is not rocket science to identify the harmful effects of x-rays. As you smoke the first cigarette, the cancer-causing substances form very rapidly, and continue as the smoking habit persists. 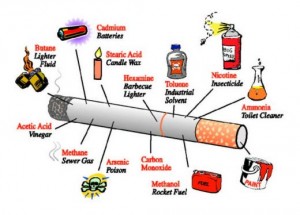 Smoking is said to be harmful, not only for the smokers but also fore the non-smokers. The smoke released, is equally harmful to the person sitting near the smoker. Also called as passive smokers, there is increase in the risk of having a lung cancer by about 20-30%. That is why it is not allowed to smoke near pregnant mothers and new born babies, because the risk of infection increases manifold.

Smoking has a much wider effect worldwide, than assumed. The total number of smokers is approximately 1.1 billion. According to World Health Organization, Smoking and use of other tobacco products causes 4 million deaths world wide every year, which is one of the leading causes of deaths. The risks and effects will increase in the future, and estimates are truly mind boggling.

Smoking is harmful to both, the smokers and the non smokers. The residue of the cigarette butts is very dangerous and increases the risk of lung cancer, even for the non-smokers.

With 70% smokers in the developing countries, it is the youth of the area which gets involved in these products. With the ‘experimenting’ that starts because of the peer pressure, or as a tag of the ‘cool effect’, it takes no time to convert into a habit and the person, within days, becomes a chain smoker. It is the nicotine present in the cigarettes which then forces the consumer to smoke more and more.

Let me tell you a very startling fact. If a unborn baby is exposed to second hand smoke in the womb, the chances of the baby being a smoker, later in his life increase. This is because of the same factor, nicotine. So, you see how even non-smokers are brought harm by these products. So, if you are a parent, do not smoke at all. Because you know that your consumption of such products will harm your children, which is the last thing in the world you would want.

World Tobacco Day is observed, worldwide, on 31st May. Many awareness programs are started on this day to motivate the smokers to quit smoking. There are some projects by government, or some by other organizations which spread awareness about the harmful effects of the tobacco products. Although smoking is banned in many public places, but the problem sneaks in through one way or the other.

But, above the efforts of the non-smokers, it must be understood by the smokers that smoking is injurious to health, not only to the health of the smoker but also to the non-smokers. Once you quit smoking, your body will take sometime to readjust itself and thus, become free from diseases again. The most deadly disease caused by smoking, Lung Cancer, is largely responsible for preventable deaths worldwide. It is the time to quit smoking. 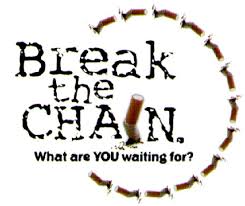 It is the time to break the chain. It is really important, for you as well for others, to QUIT SMOKING.

If you do, quit it. It might not be easy at the first place. It can be started slowly, with a strong mind and determination, and then reduced week by week. It surely is achievable. Many people have already quit smoking. Many have not, and are facing the consequences.

“Giving up smoking is the easiest thing in the world. I know because I have done it thousands of times.”

Try not to imitate Mark Twain. Quit smoking, there are many more wonderful things in this universe.