You are here: Home \ Environment \ Soul of the Forest- Jadav Payeng
Environment
0

Soul of the Forest- Jadav Payeng

While there are many famous personalities in India and around the world, who have achieved success and fame throughout the world with their global ideas, here is a man who has contributed his entire life to forests. With ‘Forester’ as his occupation, Mr. Jadav Payeng is known as the Forest Man of India for being […]

While there are many famous personalities in India and around the world, who have achieved success and fame throughout the world with their global ideas, here is a man who has contributed his entire life to forests. With ‘Forester’ as his occupation, Mr. Jadav Payeng is known as the Forest Man of India for being active in afforestation from the year 1980, i.e. for more than 34 years. While all our activities tend to destroy the home of wild plants and animals, this one man army has planted forests for wild elephants, tigers, rhinos and deer along with other wildlife animals.

His journey as a forester started 34 years back, when no one could guess that this man will be called as the forest man of India. His work field area now stands as large as over 550 hectares of lush green forest. His future planning includes covering the 150 hectares of land adjacent to this forest. Given the name ‘Forest Man of India’ by Jawaharlal Nehru University (JNU), this man has also received award from the state government as the forest is named after his pet name, Mulai. 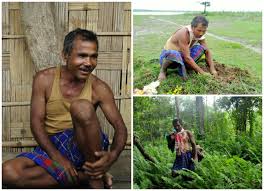 As simple as his lifestyle, the man has done wonders.

It is strange how one man with a very simple life style, with very basic education and with very limited resources has become such a big environmentalist. If not very famous as someone like Tata or Mittal, this person produces trees. The industrialists might generate good, services or electricity, but their industries are responsible for cutting of trees, which results in increase in the carbon content in the atmosphere, giving a rise to global warming and other issues. On the other hand, this man is responsible for the production of huge quantities of oxygen, and providing habitat to many wildlife animals at the same time.

He surely is an industrialist, but a flora industrialist. The year in which he started planting trees was hit by a major flood in Assam and he observed the soil erosion taking place because of the excessive deforestation in the area. This inspired him to plant more and more trees and start a selfless journey to save the Eco system.

Being alone could not shake his determination, and he stands successful in his mission today, followed by many.

The beginning for this teenager was not a huge thing. He would only plant one plant a day. But doing this consistently for the past 34 years, Mr. Payeng deserves a lot more than what he is getting now. Though his satisfaction lies in those green forests, and the green notes and heavy bank balance do not matter much to him.

At the same time, we continue to be greedy and dishonest with nature at the same time. There have been attempts of killing rhinos staying in the area by some poachers. This was prevented by the very alert Molai, who confronted the forest officials with the attempt and the articles used for poaching were seized by them. 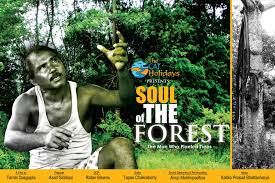 He is the Soul of the Forest. Page by Bijit Dutta.

Payeng never used any chemicals or fertilizers for his plants; rather he used the activities of termites, ants, earthworms and insect to increase the fertility of the soil. This method of organic farming is really helpful in maintaining the texture of the soil and is environment friendly at the same time, though he admits that he was stung by red ants in the process of carrying them from one place to another.

There have been protests, when the herds of elephants would stray in the nearby fields or when one or two tigers were spotted in the village. But he has been brave through all this. “He treats the trees and animals like his own children.”

The help from government and our own attitude towards people like Payeng is not very encouraging. We are forgetting the work done by such people is really helpful to keep global temperature in check. These people deserve the credit and honor for the noble deed. 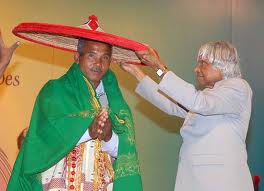 Being honored by one of the most successful presidents of India- Dr. Kalaam.

Living in a small hut and belonging to a tribe called ‘Mishing’ in Assam, he is accompanied by his three children and his wife. So, the whole family is engaged in spreading the forest cover in the region. His only source of income is generated by selling the milk produced by cows and buffaloes, but this man has already increased the age of the planet and the age of the existence of human beings on earth.

To all of us, sitting in the Air conditioned rooms and acting busy in our own jobs, there is a crystal clear lesson this man’s selfless and dedicated life teaches us. It is very much possible to live without money, but plants are more important. Do learn, do plant a tree today. A tree today will be a contribution to the mission of Mr. Payeng, of a greener world, of a happier world.